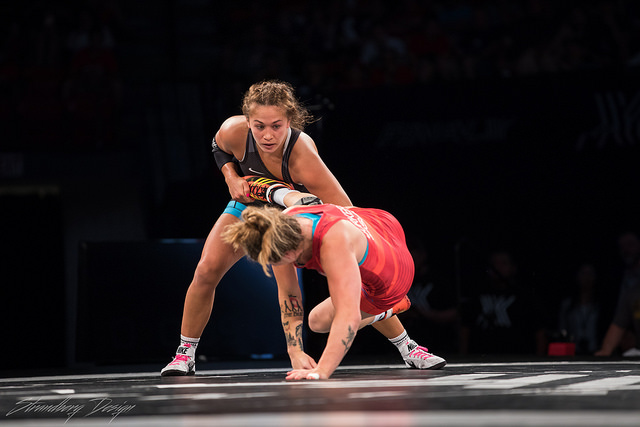 This weekend USA Wrestling will be hosting a special wrestle-off between nine Women’s wrestlers for the right to represent the United States later this spring at the Pan American Continental Championships. The event serves as an Olympic qualifier for the countries competing in the Ottawa, Canada based event as the two finalists from each weight will lock up an Olympic bid for the country.

But before we know which wrestler will represent the U.S. in Canada next month, there will be a battle at three weight classes for the opportunity to compete this Saturday at Life University. USA Wrestling has announced the three weights contended as 50, 53, and 57 kg. The 57 kg battle features Hawkeye Wrestling Club team member Alli Ragan.

“We have on the Men’s and Women’s side eight spots to qualify for the Olympic Games so we got some work to do.” HWC head coach Mark Perry told IAwrestle in a recent interview, “This is a huge event for the USA. The Olympic Trials don’t mean a whole lot if we don’t make the finals of the Pan American Olympic Qualifier. It means something (to win the Olympic Trials), but you’re not going to the Olympics if you don’t qualify the weight.”

At this weekend’s event, Ragan will take on the 2016 Olympic gold medalist Helen Maroulis in a preliminary match. If she wins that she would advance to a best-of-three series with 2019 World Team member Jenna Burkert.

“She needs to dictate, it needs to be a physical match. It needs to be a hard paced match.” Perry said of Ragan’s prelim bout against Maroulis, “There is nothing but respect for Helen. She is maybe the best Women’s wrestler America has ever had so there’s respect there, but we have to take it to her.”

For the second straight Olympic cycle Ragan will be competing in USA Wrestling’s special wrestle-off. Back in 2016, she competed in Iowa City where she defeated Leigh Jaynes-Provisor in two straight matches to win the spot.

This weekend will pose an extremely difficult challenge as Perry mentioned she will be facing one of the U.S. all-time greats in Maroulis. Dating back to 2008 Maroulis has been competing at the Senior level for USA Wrestling. In 2012 she won her first World medal, a silver performance at the World Championships held in Canada. From there she went on to medal on four more occasions, with her last being the 2017 gold medal in Paris.

Ragan comes in with her own World level accomplishments boasting a pair of Silver medals at the 2016 and 2017 World Championships. Most recently we saw Ragan compete in the United World Wrestling’s Ranking Series event, the Matteo Pellicone Tournament hosted in Italy. There Ragan earned a bronze medal finish

Sitting in the finals is Burkert, who is a three-time Senior World Team member making her first team in 2014 followed by making it in back-to-back years in 2018 and 2019. In 2018 she was actually runner-up to Ragan in the qualification process but competed for the U.S. after Ragan had to withdrawal due to injury.

Catch the wrestle-off live on Flowrestling this Saturday during their coverage of the WCWA Championships.