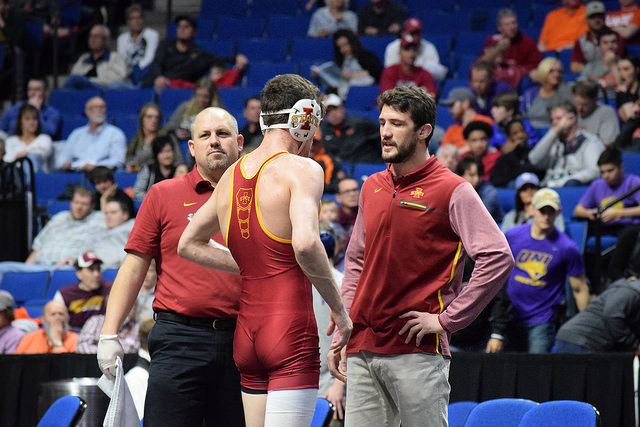 This past weekend all three members of the Iowa State coaching staff appeared on The Open Mat’s Takedown Radio to discuss the recent changes to the program, and to preview the upcoming season. Obviously the Cyclones have been a big topic of discussion nationally this past month after the dismissal of associate head coach, Mike Zadick.

When Kevin Dresser was hired from Virginia Tech to lead Iowa State, Zadick was one of two coaches to follow to Ames. The move led to Zadick getting a promotion from full-time assistant to associate head coach. According to Dresser, the removal of Zadick from the staff was a business decision that needed to be made to align the team chemistry.

While rumors have circulated on specific reasons why Zadick was let go, Dresser was quick to compliment his former employee on his time with the team as well as dismiss one rumor in particular.

In the interim Brent Metcalf will move up to a paid assistant role. The promotion is especially relevant as he will now have the ability to recruit for the team on the road. The NCAA does not allow for volunteer assistants, which was Metcalf’s previous role on the staff, to recruit off campus.

With Metcalf moving out of the volunteer role, Dresser is now tasked with finding a new assistant to fill out his staff. The NCAA has a policy that the university coaching position must be posted for at least two weeks prior to making any hires.

“Obviously there is a process when you open up a position. We had a full-time NCAA recognized position. Any time a position like that opens up there has to be a due process of opening the job up for two weeks. Obviously we’ve got a plan. Getting (Metcalf and St. John) full-time and then finding another position.”

Dresser also provided some insight into what type of candidate he is looking for to fill the final spot on his staff. While Dresser stressed the want to find the right fit, his current ideal candidate would be someone who is currently active in our domestic freestyle scene, though the decision won’t necessarily be completed prior to the season.

“We’re going to look to hire somebody that’s still competing but wants to coach as well. I think it’s got to be the right guy, and I don’t want to get in a hurry. The last thing you want to do is bring in a guy temporarily. The intent always when you hire somebody is to keep them as long as you can keep them.”