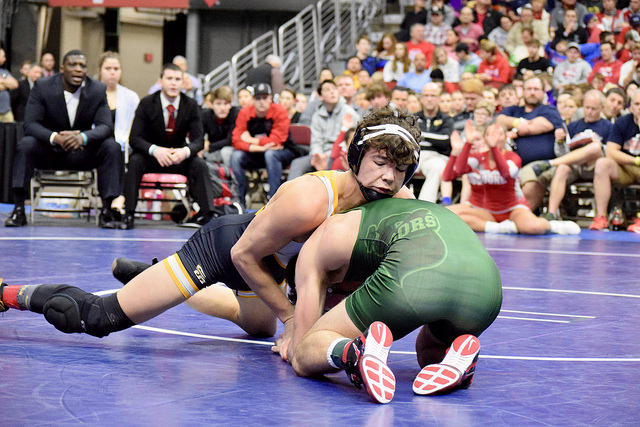 Another big 2019 senior is off the board, as Southeast Polk standout Cade DeVos has committed to South Dakota State. The news was first broken by Cody Goodwin of the Des Moines Register.

“I felt like SDSU just fit me the best,” DeVos told Goodwin. “I didn’t want to be a plane ride away from home, either.”

A two-time state medalist in the state of Iowa, DeVos won the 2018 state title at 145 pounds after finishing runner-up as a sophomore for the Rams DeVos did not compete at the 2017 state tournament due to injury. Additional accolades include a double All-American performances at Fargo the past two summers.

Ranked #4 in IAwrestle’s Fab 50, DeVos is the second Iowa native to announce a commitment to the Jackrabbits this summer. Less than a month ago, Ballard, Iowa prep Skyler Noftsger announced he would be heading to Brookings as well. Both Iowan project as middleweight recruits for SDSU.

The Jackrabbits have plenty of familiar faces already on roster/staff. Current starter at 141 pounds is Johnston, Iowa native Henry Pohlmeyer and fellow Johnston Dragon Zach Price is joining the program this fall as a true freshman. The Jackrabbits have a new face at the head of the program, recently hiring Damian Hahn to replace Chris Bono although former Bono-era assistant Cody Caldwell remained on staff. Caldwell wrestled for Waverly Shell-Rock high school and Northern Iowa.