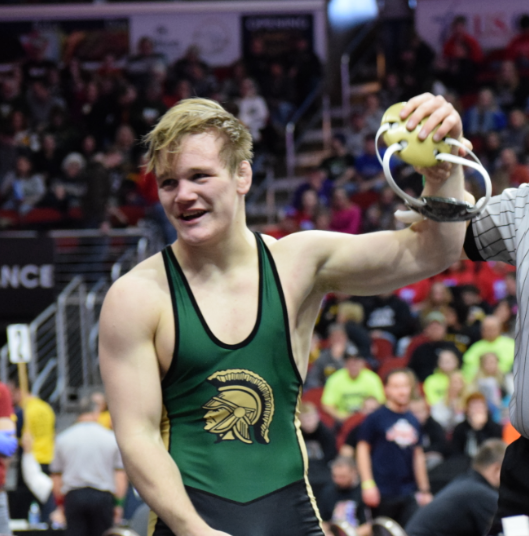 With the 2018 recruiting season and regular high school season in the books, it’s time to do a wrap-up on the finished product for the Hawkeyes 2018 recruits, and we’ll also look ahead to see how some of them may project into the 2019-2020 Hawkeye lineup after a redshirt year.

The Hawkeyes 2018 recruiting class consists of four names, three of them Iowa natives, and one out of stater from Illinois. The three homegrown Hawkeyes consist of Cam Shaver, Joe Kelly, and none other than Nelson Brands, son of Iowa Associate Head Coach Terry Brands (who’d have guessed?). The crown jewel of the recruiting class comes out of Illinois in the form of Anthony Cassioppi who is among the top ranked heavyweight prospects in the nation, and Iowa’s highest rated recruit in the class.

Cam Shaver was a one-time state qualifier for Cedar Rapids Kennedy in 2017 while competing at 120 pounds. He finished 1-2 at the tournament and unfortunately didn’t reach the podium. This past season he competed at 126 pounds, and though he had an improved season record he finished third at a tough district tournament and did not qualify for the 2018 State Tournament. Being a Hawkeye has always been a dream of his and he will add valuable depth at either 125 or 133 pounds for the Hawkeyes.

Next up is Joe Kelly out of West Liberty. Joe is the son of Mitch Kelly, who also wrestled for the Hawkeyes and has a sister, Molly, on the Hawkeye volleyball team. Joe finished eighth at state as a freshman. Then as a sophomore and junior he finished as a 152-pound runner up and third place finisher respectively before capping off his senior season with another third place finish at 152 pounds, after dropping a bout to the champion in the semifinals of the state tournament. He projects at 157 lbs for the Hawkeyes.

Then we’ve got one of more interesting recruits for the Hawkeyes considering his “strong” family ties to the program, you know, being the son of one of the coaches and all. What’s more interesting is that Nelson is somewhat of a late bloomer, considering he did not even starting competing until he was in seventh grade. Nelson is rated as the #80 overall recruit in the 2018 recruiting class according to FLOWrestling’s 2018 Big Board. Brands failed to qualify for the state tournament as a freshman at Iowa City West before rattling off an impressive three consecutive state titles, all at different weights. He won at 138 pounds as a sophomore, moved up and won at 152 pounds last year as a junior, before capping off his senior year with a 160-pound state title. Nelson projects at either 157 or 165 pounds on the next level, and will bring a very intense pace of wrestling to the Hawkeye middleweights.

Finally, rounding out the class is the highest ranked prospect of the bunch in Anthony Cassioppi, a heavyweight prospect from Illinois. Cassioppi finished off the season as the #17 overall prospect in the 2018 class on FLOWrestling’s 2018 Big Board. He is coming off a very impressive finish to his high school folkstyle career which includes two straight undefeated seasons in Illinois largest division, and also two state titles at heavyweight. Cassioppi is a pinning machine, finishing all of his matches at the Illinois state tournament by fall.

Perhaps more impressive than his folkstyle results have been his freestyle and Greco results. As a sophomore he finished as a freestyle runner-up and Greco third place finisher at Fargo, following it up with a very impressive junior campaign winning the illustrious Junior Triple Crown award, which required winning all three of the folkstyle, freestyle, and Greco national championships. There had only been sevent total Junior Triple Crown winners prior to 2017 and Cassioppi marked the eighth in the history of the award. Cassioppi will look to repeat the feat this year becoming only the second to win two Junior Triple Crowns, the first wrestler to accomplish that was Adam Coon, another very accomplished Heavyweight wrestler, to say the least. Cassioppi projects as a heavyweight at the next level, and will slot in perfectly after Sam Stoll graduates, following a redshirt year.

Now I’ll take my best stab at projecting the 2019-2020 Iowa Hawkeye Lineup, which would be the year these recruits come out of redshirt.

The general consensus among fans, though not confirmed and won’t be confirmed until this fall, is that Cash Wilcke will be dropping down to a more natural weight class of 184 pounds to strengthen the lineup and make room for Top 10 pound-for-pound recruit Jacob Warner to slot in at 197. It’s also a possibility Max Murin could challenge for the 149 spot as well in the future, as rumors are he has still been growing throughout his redshirt year.

Out of that group mentioned above, Lee and DeSanto would still have redshirts available (if the latter chooses to transfer to Iowa as rumored), allowing for some flexibility still in the lineup. Nelson Brands looks to be able to slot in after Kemerer graduates at 157 pounds, assuming he could still make the weight by then.

Another intriguing possibility could be Vince Turk potentially qualifying for a 6th year of eligibility. Given that Turk dealt with injuries during the latter half of his redshirt season as well as missing his entire redshirt freshman season due to injury (only competing at the Luther open early season), he would seem to be a prime candidate to receive a medical RS, especially when you compare him to other guys who have recently been granted sixth years including Willie Miklus (Missouri) and Anthony Ashnault (Rutgers). He would appear to have just as strong a case as either of those wrestlers.