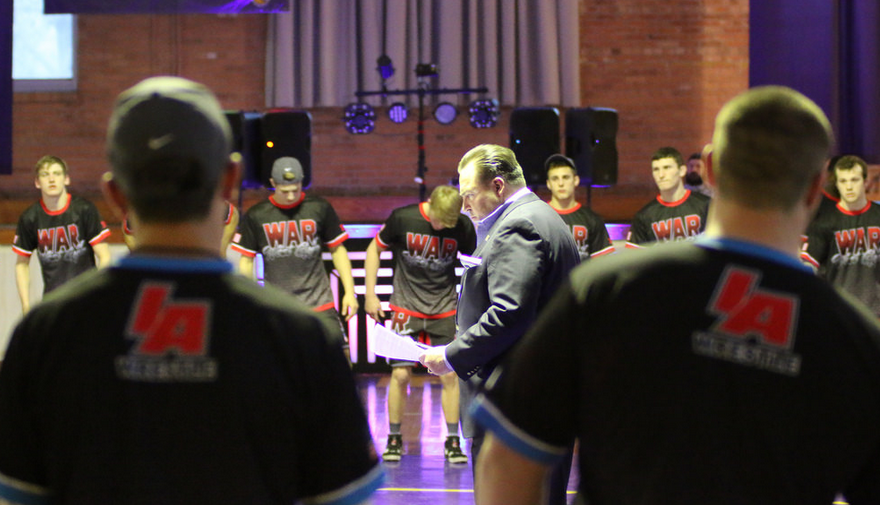 When: March 10th at 6:00 P.M. (Doors open at 5:00 P.M.)
Where: University of Northern Iowa (West Gym)
Tickets: Eventbrite or AT Door $10
Watch: Live stream will be available via Trackcast

This Saturday in Cedar Falls the second edition of the War at West Gym will take place on the University of Northern Iowa’s campus and the IAwrestle team has put together a card that features 13 fantastic matchups. The event has several cross-class clashes, a couple of nationally ranked meetings, and above all else some really interesting storylines.

We start with the cross-class battles as the War at West Gym is lucky enough to have ten state champions willing to toe the line against their peers to help decide “Iowa’s best class”. The 1A-2A-3A debate is hardly anything new, but this event has the potential to put 1A definitely on the map.

All five of our head-to-head state champion battles feature a 1A wrestler with three 2A wrestlers, and two 3A wrestlers rounding out their opposition. When it comes to the class debate 1A is usually the class taking on the most flak, but this is a put-up or shut-up type situation as no one will be able to deny 1A their dues with a strong showing in the below matchups.

Leading off is a pair of Division II bound wrestlers in Lisbon’s Siebrecht and Crestwood’s Steffen, who both captured their first state title last month. When it comes to the size advantage Steffen will likely hold the edge so we will see if that plays a role at all in this match.
The second bout features local wrestler, and UNI commit Gable Fox who would love nothing more to not only secure a win for Class 1A, but to also get that win on his future home mat would be nothing short of sweet. Unlike Fox, Stewart didn’t start wrestling until high school so he doesn’t have the accolades to compare with Fox.

Next is a bit different scenario with the 1A wrestler actually coming up one weight to test himself against the 2A champion, which is deserving respect in that aspect alone. Ruffridge is coming off a huge win in the 2A class beating Clear Lake’s Eric Faught – who is one of the state’s top juniors. Like his teammate, Happel will likely be giving up the size advantage coming into his matchup, but he definitely has the skills to come out on top.

Another matchup fans are itching to see is the 113-pound bout between two-time state champion Allard and 3A titlist Oldham. Coming from the western part of the state, Allard is a bit under the radar since he really doesn’t hit a lot of the state’s perceived big names. Regardless he has gone two-for-two at the state tournament and just missed out on the podium out at Fargo this summer, so he’s got national credits too. On the other side is Oldham, who came back strong in his junior season to win a title over Ankeny’s Caleb Rathjen, a double All-American at Fargo last summer. Oldham picked up his first big national credential this past fall, placing at the Super 32 tournament and then won his state title in February. This bout is interesting to see how these two stack up against one another.

Finally, we have a pair of two-timers facing off in our last meeting in the cross-class clashes. Winning titles as a sophomore and senior is Wapsie Valley’s Schmit who will be taking on Davenport Assumption’s Matt Robertson. Anyone that went to last year’s event remembers the funk show that Robertson put on in his match with Western Dubuque’s Bradan Birt. It was widely regarded as one of the more entertaining matches on the night. Schmit is a hardnosed grinder which means the battle will also be a clash of styles.

The War at West Gym event features two nationally ranked head-to-head meetings so you can bet your bottom dollar that the Kyle Biscoglia vs Anthony Molton matchup – which is #5 vs #8 according to The Open Mat rankings – is a noteworthy storyline.
Known for his stingy nature in the neutral position, we will see if Molton has the ability to fight through Biscoglia’s hands to get to his legs. A potential heir to the 125-pound weight class for UNI, Biscoglia has a good opportunity to get accustomed to the West Gym environment and with this being his future home mat, his opponent will likely be feeling the heat.

Broderson gets a quality opponent

One of the state’s rising juniors, Broderson is coming off a second state title and will be taking on an out-of-state opponent. Prior to last weekend Minnesota’s Tyler Buesegens was considered a top 20 wrestler nationally at 182 pounds, but a hiccup at the state tournament caused him to drop. While a win by Broderson will likely no longer earn him the attention of those compiling national rankings, this is still very much a potential signature win for the Assumption standout.

The story is very much the same for Buesgens, who is an Iowa State signee. After his rough weekend this matchup provides an opportunity for the future Cyclone to get back on track against a quality opponent.

Another future Panther looking to make some noise in West Gym is Michael Blockhus. A staple in IAwrestle events, this is Blockhus’s fourth appearance and he is riding a two match winning streak. Last year Blockhus put up a solid win over 3A runner-up Cade DeVos of Southeast Polk, and his preseason defeat of Malcolm Robinson at NOC3 shot him up the national rankings. In his epic finale Blockhus will bump up to 152 pounds to take on Isaac Judge, which means he will be up two classes from where he won his title in February.

The other side of this story is Judge, who is no slouch himself winning his second state title this past month in what was considered a very strong 2A weight. May have a bit of a chip on his shoulder in this match for a number of reasons starting with the fact that Blockhus is coming up two weights, last year he took a loss at this event and he is looking to rebound from that, and finally I am sure it won’t be lost on Judge that as a future Cyclone his match with a future Panther has some college pride on the line as well.