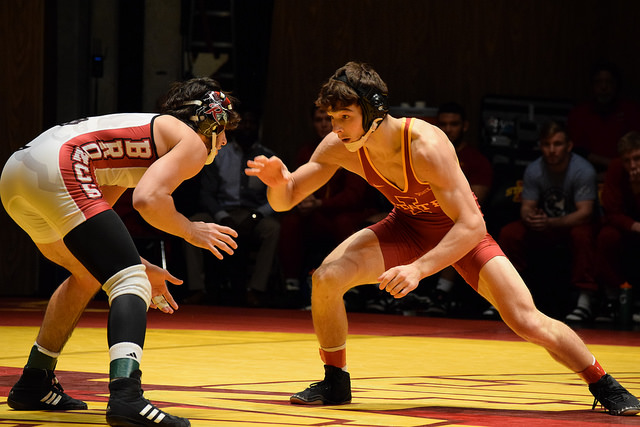 There’s really no way to sugarcoat it, Iowa State had a rough first day at the Big 12 Tournament.

“It was a tough day, you’ve got to learn how to compete when things get tough. We competed somewhat today, but overall as a program that’s what we have to continue to learn to do, is learn how to win,” Iowa State head coach Kevin Dresser said after the day’s wrestling. “We really need to learn how to train.”

There were a couple of bright spots through the gloom. Iowa State has five guys in consolation semifinals tomorrow in Ian Parker (141), Jarrett Degen (149), Chase Straw (157), Dane Pestano (184), and Marcus Harrington (285).

Parker was perhaps the biggest surprise of the tournament to that point, he lost a 4-2 decision to Henry Pohlmeyer in sudden victory, but would come back with two nice wins over Alec Opsal from Air Force and Matt Findlay from Utah Valley.

“Ian did a good job coming back,” Dresser said. “Was obviously in a lot of scoring situations that first match, he just wasn’t able to capitolize on them.

“You’ve got to learn to win on the backside, very few guys go to the nationals the first time and get to the finals.”

At 157 Straw won a pair of matches on the frontside of the bracket, avenging a loss to UNI’s Logan Ryan with a fairly dominate 8-2 win. Straw would lose to the number one seed Clay Ream, and he’ll wrestle another Air Force man in Alex Mossing tomorrow.

Up a couple weights Dane Pestano won three matches on the day, dropping a front side match to the 2 seed Martin Mueller. Pestano will get Oklahoma State’s Keegan Moore in the consolation semifinals.

At heavyweight Marcus Harrington took down Carter Isley for the second time this year, and like Straw avenged a loss to Isley from the ISU-UNI dual a few weeks ago. Harrington would lose by fall in his next match against the three seed AJ Nevills to fall to the backside. He’ll get North Dakota State’s Dan Stibral in the consolation semi’s tomorrow.

Overall the Cyclones sit in 9th place, with just 34 points. They sit ahead of Northern Colorado, Fresno State, and Air Force.

“We can’t control what happened today we’ve just got to get ready to go tomorrow.”