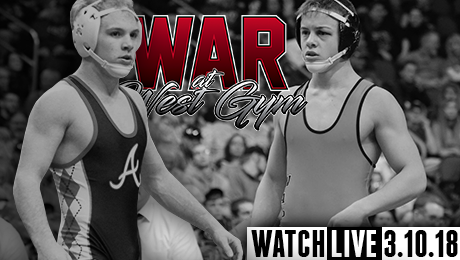 Our second War at West Gym matchup is set and it will pit two Iowa high school state champions against each other. Davenport Assumptions Matt Robertson will square off with Wapsie Valley’s Donny Schmit in what will be a battle between the 2A and 1A state champions.

Making his return to the event is Robertson, who successfully defended his 132-pound crown last weekend in Des Moines taking out South Tama’s Brady Fritz in the finals. A year ago Robertson provided fans with one of the more entertaining matches on the evening during his scramble affair with Western Dubuque’s Bradan Birt.

“After wrestling in this event last year I knew I wanted to do it again!” Robertson said of his return, “The atmosphere in West Gym is awesome. The team at IAwrestle is doing an awesome job putting these events on and getting people to come. I’m excited to wrestle Donny and get rolling into summer wrestling!”

On the other side of the matchup is Schmit, who enters the dual as a three-time state finalist. Schmit returned to the top of the podium this year with his other title coming as a sophomore back in 2016. His only loss at the state tournament between those two state titles was to Underwood’s Alex Thomsen his junior year.

“I like the challenge and like to compete. This is a perfect event for it!” Schmit said on the match.