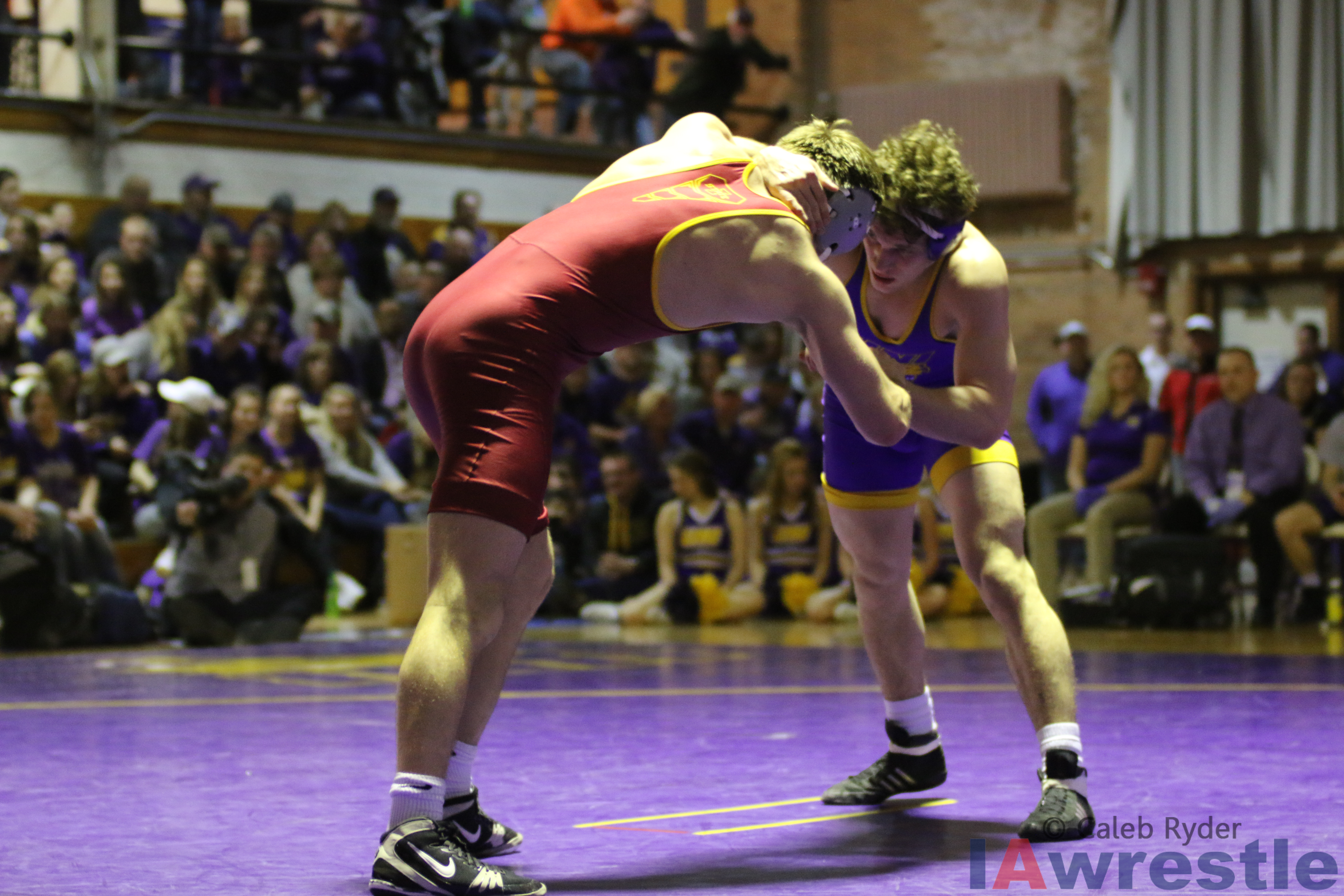 Though it seems like the dual season just got started again for Northern Iowa it’s actually just wrapping up. The Panthers host the Mid-American Conference Champions this Saturday in each squads final dual. Missouri comes in undefeated, with their last loss coming against a very similar UNI team in the MAC championship dual last season (results of last year’s dual can be found below).

Though the teams are fairly similar there are a couple of potential rematches: at 125 pounds #19 Jay Schwarm might see Barlow McGee for the third time in their careers. Schwarm is 1-1 against McGee, losing last season against the Tiger at the Southern Scuffle, then bouncing back with a win during the UNI-Missouri dual meet. If McGee doesn’t wrestle (he has sat out the last two duals) then Schwarm will get Aaron Assad, who Schwarm defeated 16-0 the Scuffle last season.

It’s also Senior Day at the West Gym, and UNI will be honoring one senior, Jake Hodges. Hodges hasn’t competed much for the Panthers this season, going just 4-5 on the year, but he wrestled twice in the MAC Championships and for three seasons as a starter.

The other potential rematch happens to be one of the better matches of the night. At 141 pounds #9 Josh Alber will take on #2 Jaydin Eierman. These two wrestled two years ago at 133 pounds, with Alber losing by fall. Alber had last weekend off as Iowa State forfeited at 141 pounds, so we’ll see if the extra week’s rest has helped him at all. If Alber can get to – and finish – an attack or two I think he gives Eierman all he can handle.

The dual last season was the last time I can remember UNI wrestling a ‘complete’ dual meet. Senior Jared Bartel came back into the lineup after suffering a believed season-ending injury earlier in the year, and he was able to get the Panthers started quickly with a 4-3 win over Austin Meyers. That started the Panther Train rolling, as they won 7 of the 10 matches, earning four upsets, one by pinfall.

In order to get a similar result this year the Panthers will have wrestle another ‘complete’ dual. UNI will be favored in just two matches, while matches at 141, 149, 174, 184, and 197 are all between top 11 wrestlers. If Doug Schwab’s team wants the win they’ll have to pull off some upsets similar to last season.

In that similar situation again is Max Thomsen. Thomsen last season upset #3 Lavion Mayes 9-2 in the dual, but couldn’t find another win against the Tiger in two additional matches at the MAC and NCAA Championships. Thomsen’s ability to fight off shots and keep good position helped him last year and can only help him again this season – but he’s going to have to show that he can get to and finish shots before I’d pick him to get the upset. Last week against Iowa State’s Jarrett Degen, Thomsen was ridden out of the majority of the second period and that can’t happen again against Grant Leeth.

Another big difference in last year’s and this year’s dual are the matches at 174 and 184. UNI’s Taylor Lujan and Drew Foster will have very tough matches against #3 Daniel Lewis and #14 Canten Marriott. Lujan and Foster were both heavily favored in last seasons dual as they both took on unranked wrestlers, but UNI won’t have that luxery this season. Lewis is a two-time defending MAC Champion and All-American at 165 pounds and is undefeated at his new weight this season. Lewis has just three wins by decision all season, the rest have all been bonus-point victories(!).

Foster will take the mat against Marriott in a match that we’ve not seen before. Foster has been solid as of late, winning his last 11 matches in a row, with eight of those coming with bonus points. Foster has been aggressive early in matches, which is great, and since his conditioning has come back to him he’s looked good late in the second and the third periods as well. I’d like to see him score more points in the third period, rather than just try to hold opponents off (like last week), but hey, winning is winning. For UNI to have the chance at the team win Foster has to hold serve and not get upset Saturday.

The final match between ranked wrestlers comes at 197 pounds. Southeast Polk’s own Willie Miklus comes to Iowa for maybe* the final time to take on Union’s Jacob Holschlag. Miklus is following his 174-pounder’s example and bumping up a weight this season after earning All-American status twice in 2015 and 2016. Miklus is 18-3 this season, with some close wins – just Wednesday he snuck by SIU-E’s Christian DuLaney 4-3 – and lost to Iowa’s redshirt freshman Jacob Warner by major decision, but he always wrestles well against UNI and I’m sure wants to go out on a high note against Holschlag.

As for the Panther, Holschlag is at 15-7 this season with all but one of his losses coming by decision. Everybody knows that Holschlag is a beast on top, but has he developed enough offense from his feet to break through to the next level? I don’t necessarily think so, but his top game is so strong that it makes up for it in nearly every match. Because of that Holschlag is competitive in every match he wrestles, and it should be a good one against Miklus on Saturday.

No predictions from me this week, but in order for the Panthers to pull off the team upset they’ll need at least two wins between 141, 149, and 174. If that happens and the rest of the dual goes to the favored wrestler then they should be right in it. If not they’ll need big bonus point wins to pull the upset.

The dual starts at 2PM Saturday, and I don’t think there’s anything else going on in the state that day (sarcasm), but we’ll be in Cedar Falls providing updates, so be sure to check back to IAwrestle.com, @IAwrestle and @Nic_Ryder on Twitter for the most up to date results.

*Miklus was injured last season. Last we heard was Missouri was trying to get him a medical redshirt so he would have an extra year of eligibility. I don’t think Missouri has received an official word back from the NCAA yet on him, but we’ll let you know if we find out different.