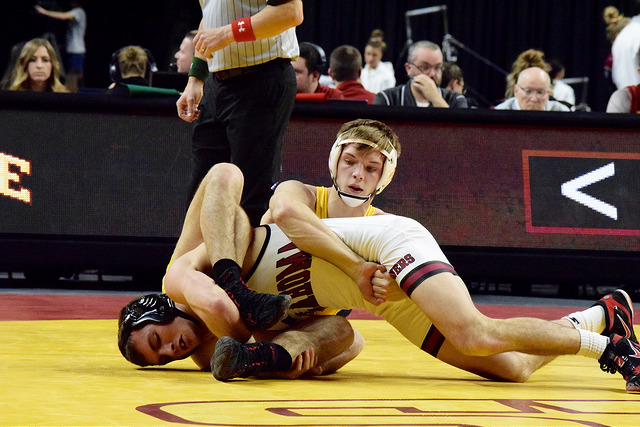 Another wrestler has requested his release from the Iowa State wrestling program, according to Des Moines Register reporter Cody Goodwin. Redshirt sophomore Colston DiBlasi, was granted a full release from the program to transfer to any non-Big 12 school of his choosing.

Hailing from Missouri powerhouse Park Hill high school, DiBlasi compiled a 42-31 record over the past two seasons, seeing most of his action at 157 pounds. As a freshman DiBlasi was the team’s postseason starter at the weight, but he had lost the starting job to fellow sophomore Chase Straw this season. After losing his spot to Straw to begin the year, DiBlasi bumped up to 165 pounds where he made two dual starts against Rider and Wyoming.

According to the Register’s article, DiBlasi cited differences with the coaching staff as his reason for leaving the team. Goodwin also reported that DiBlasi’s younger brother Weston, who is a 2018 recruiting class signee for the Cyclones, has also requested his release.

The reported reason for DiBlasi leaving the Iowa State program is not an uncommon one given the staff’s turnover to Kevin Dresser. DiBlasi becomes the eighth wrestler to depart the program since Dresser took over last February, starting with Brenden Baker, Zeuma Baptista, and Andrew Stowe who all transferred prior to the start of the year and in-season departures include Danny Vega, Jon Marmolejo, Gavin DeWitt, and Kanen Storr.

One thought on “Colston DiBlasi Requests Release From Iowa State”