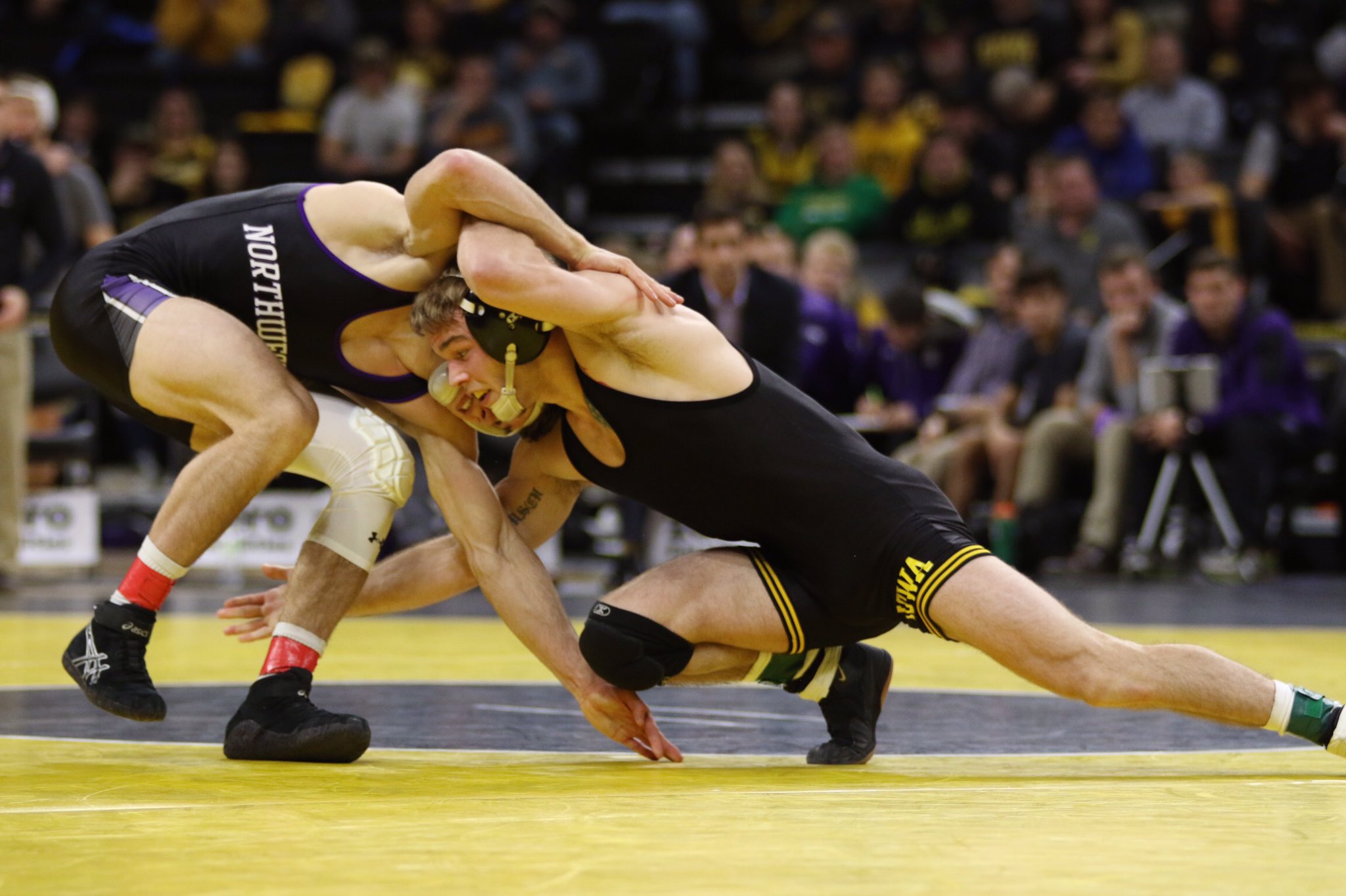 It was senior day in Iowa City and the Hawkeyes were able to give their senior class a warm send off as they defeated the Wildcats of Northwestern 33-2. The only starting senior in the Hawkeye lineup was 149-pound, and four year starter Brandon Sorensen’s who matchup against Junior World Silver medalist Ryan Deakin in what would be a meeting of two top five wrestlers.

Kicking things off was the #4 ranked Spencer Lee facing the #10 ranked Sebastian Rivera in the battle of freshmen. Lee was able to strike quickly in the first period and tacked on four near fall points later in the period to build a 6-0 lead. After taking the down position in the second, Lee spent the entire period on bottom as Rivera was able to ride the full two minutes. With his choice in the third Rivera elected to start neutral and was able score two takedowns of his own to close that gap, 7-4.

Getting the nod at 133 pounds was sophomore Paul Glynn who got the call against Colin Valdiviez. With the match scoreless after two period, Valdiviez took down to start the third and picked up a reversal to take the lead. An escape by Glynn cut the score to 2-1, and from there Glynn poured on the shots where he was finally able to convert on the match winning takedown with three seconds remaining. The final 3-2 in favor of the Hawkeye.

Despite upsetting an All-American on Friday, Brands went with sophomore Vince Turk at 141 instead of Carter Happel to face Alec McKenna. Turk picked up two first period takedowns to build an early 4-1 lead over McKenna. In the second period McKenna managed to ride Turk the entire two minutes, but Turk was awarded a stalling point to continue to pad his lead. Turk then picked up five third period points to push his final result to a major decision, winning 10-2.

The dual’s co-main event took place at 149  between the top five ranked Sorensen and Deakin. After a scoreless first period, Deakin got on the board first with an escape, but Sorensen quickly dropped down to a leg and finished a single for a takedown. Deakin tied things at two points a piece with another escape late in the second period. Deakin was able to temporarily go up 4-3 after a takedown in the third period, but Sorensen tied it back up with an escape. The match then went into sudden victory where Deakin was hit with a technical violation for pulling Sorensen’s headgear that cost him the match. The final was 5-4 SV for the senior.

Steam rolling through his opponent was the #2 Michael Kemerer who won by technical fall at 157 pounds over Shayne Oster. With a 16 point outburst in the first period, Kemerer locked up the deciding point with an escape in the second period to come out on top 17-2.

It was a takedown clinic for freshman Alex Marinelli who racked up 10 scores from neutral on the way to his 23-8 technical fall over Michael Sepke at 165 pounds. Marinelli scored five third period takedowns to secure the technical fall.

Prior to the weekend Iowa only listed Joey Gunther as the starter at 174 pounds, but it was Kaleb Young who got the call at 174 pounds instead against the #17 Johnny Sebastian. It was the only Wildcat win on the day, as Sebastian came out on top 9-4.

Getting the Hawkeyes back on track was Mitch Bowman at 184 pounds who controlled the match from the opening whistle. After a first period takedown, Bowman was able to ride #19 Mitch Sliga for over a minute to end the period. With choice in the second, Bowman elected the down position, scored a reversal and tacked on to his riding time total to end the second period with over two minutes. With Sliga having no luck underneath Bowman, he opted to start the third period in the neutral position, but that led to another scoring attempt for Bowman. With the major decision in sight, Bowman cut Sliga with short time remaining and secured the final takedown to win 9-1.

Things tightened up a bit at 197 pounds where Cash Wilcke managed to score an early takedown on Zack Chakonis, but a penalty point for locked hand and escape by Chakonis quickly tied things back at two points each. The two wrestlers traded escapes in the second and third periods, but after a challenged call, Wilcke was awarded his second takedown of the match. The final score would be 8-4 in favor of Wilcke after he was able to convert for his third takedown on a desperation shot from Chakonis.

Heavyweight Sam Stoll ended things with a 2-0 decision in his battle against #17 Conan Jennings. Stoll scored a takedown just over 30 seconds into the match and was able to ride out to end the first period. After a scoreless second Jennings chose the top position in the third and nearly had a turn at the end of the match, but Stoll held on for the win.

Up next the Hawkeyes will hit the road to take on the top ranked Nittany Lions of Penn State.