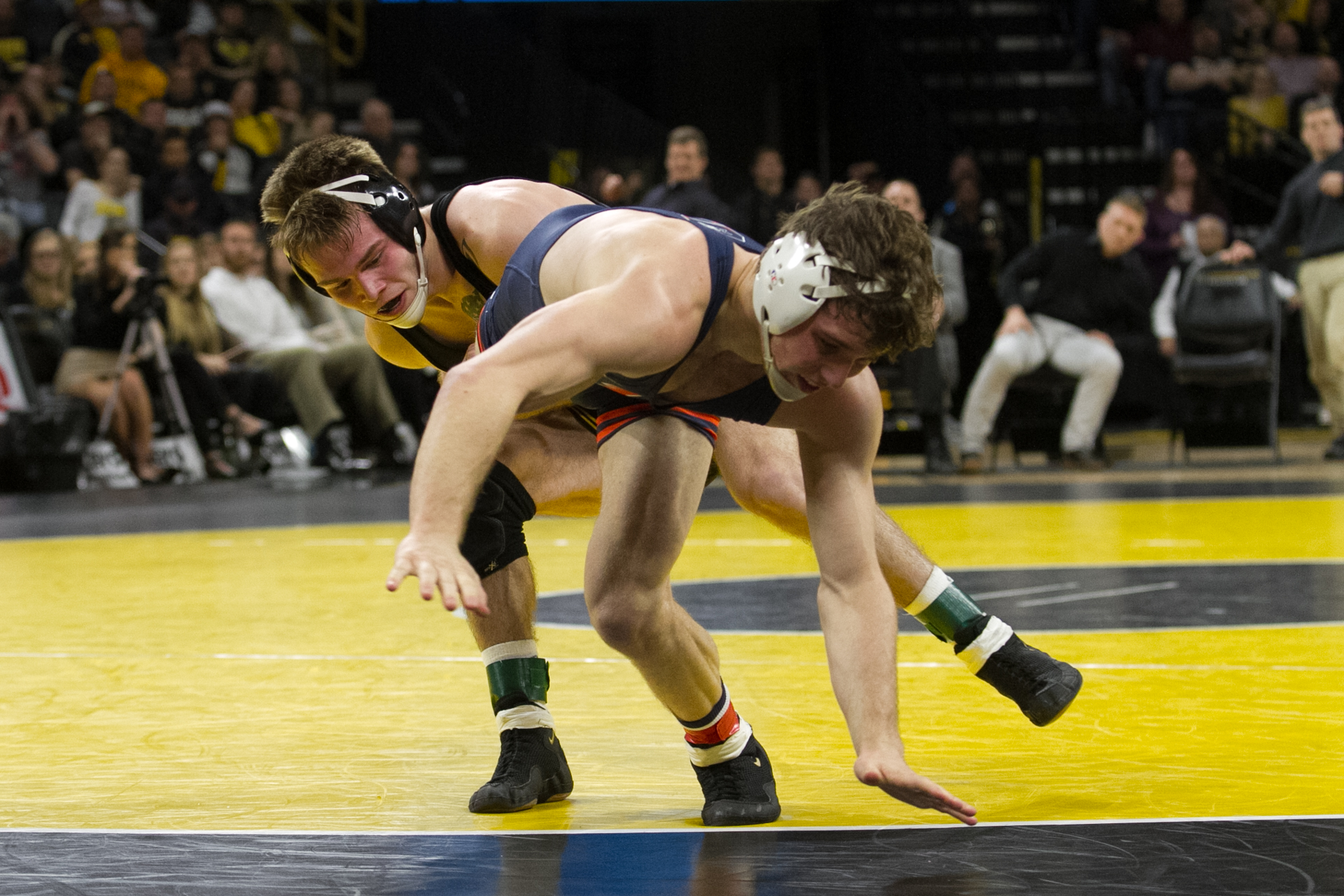 The Hawkeyes will be looking to close out their home stretch with a final home dual against the #24 ranked Northwestern Wildcats. On paper the Hawks seem to be very heavily favored in this dual, with a few possible toss up bouts. The Hawkeyes have a total of seven ranked wrestlers against the five ranked of Northwestern. The Hawkeyes are coming off a huge 34-7 win over Minnesota on Friday night.

Starting off will be one of the two biggest matches of the dual with #4 Spencer Lee taking on #7 Sebastian Rivera. Rivera has been having quite a freshman season himself with his only loss being 7-6 to Nick Suriano. Coming off his 15-0 tech fall performance over returning NCAA finalist Ethan Lizak of Minnesota, Lee is the favorite here, but it will be interesting to see how much Rivera can get going from neutral and how he will fare if he ends up underneath Spencer. According to the Hawkeye true freshman he likes leading things off so hopefully we get to see this matchup early.

The next two matches will feature battles of unranked wrestlers, so we’ll have two tossups on paper at these two weights. Paul Glynn will take on Colin Valdiviez at 133 pounds, and at 141 pounds Vince Turk will take on Alec McKenna. All of these guys are searching for those marquee wins to get ranked, but these matches will be ones both teams want to have. The one thing we know for certain is that despite his upset over All-American Tommy Thorn, Carter Happel will not get his second start on the weekend according to head Hawkeye Tom Brands.

At 149 pounds we’ll have our other biggest match of the night with #2 Brandon Sorensen taking on #4 Ryan Deakin. This will be Sorensen’s last dual ever in Carver-Hawkeye, and I’m sure will receive are warm send off from Hawkeye fans in his home arena. Last year Sorensen majored Deakin 12-4 at the Midlands, but Deakin has gone on to have good success after that, including a Junior World Silver medal. Sorensen is so consistent,and coming off a big fall against Minnesota so it’s hard to pick against him, but Deakin will pose a good challenge here. Sorensen is the start of the (so far) undefeated Iowa Middleweights.

On to 165 pounds, #7 Alex Marinelli will be taking on Michael Sepke for the Wildcats. This is another match that Hawks should expect bonus in. Marinelli will close out the trio of undefeated middleweights from 149-165, all who have faced formidable tests so far this season.

At the next weight it looks like we’ll have #18 Joey Gunther will get his second start of the weekeend was the only name listed under 174 pounds on the Hawkeye Sports match notes. He’ll be taking on #17 Johnny Sebastian of Northwestern in what will be a tossup match. Sebastian was a very highly rated recruit who has had some trouble with injuries and Gunther who was unranked coming out of high school has made obvious improvements at Iowa. This should be a very evenly matched bout.

At 184 pounds we should have another close bout on paper with Mitch Bowman taking on the slightly favored #19 ranked Mitch Sliga. Bowman has been on the cusp of being ranked this whole season, and this match could put him into ranking consideration. This is certainly a match Northwestern is eyeing, but Bowman will have the added motivation of looking to rebound from his loss to Minnesota’s Brandon Krone.

Moving up to 197 pounds, we’ll have #8 Cash Wilcke who will be heavily favored against Zack Chakonis. The two have not met previously, but both competed in the same Midlands bracket that Wilcke ended up winning, with Chakonis going 0-2. That result would lead you to expect a comfortable win by Wilcke here.

Closing out the dual #3 Sam Stoll will have a rematch of the Midlands semi finals against #17 Conan Jennings. Stoll won that head to head matchup fairly easily with a 8-2 decision. Jennings was a surprise Round of 12 finisher last year at the NCAAs’, coming into the tournament unseeded and going on a run, so he has the potential to make this match interesting, but Stoll should hold serve here.

If you are interested in computer projections, Wrestlestat projects Iowa to win the dual 26-9.