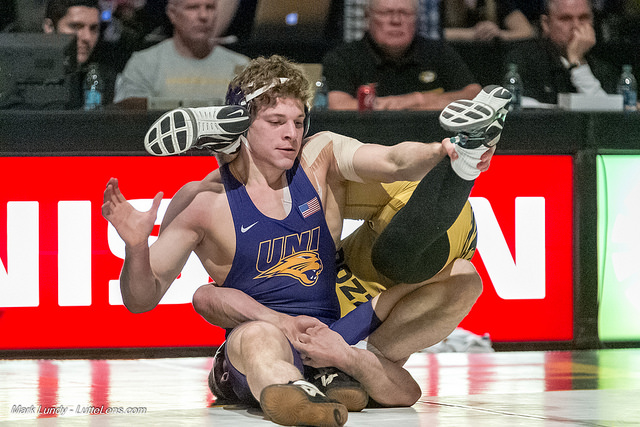 It was a disapointing day for Doug Schwab and the Panthers as they went to Brookings to take on the South Dakota State Jackrabbits. UNI came away with five wins but a big upset by SDSU’s Connor Brown at 125 pounds gave them the win.

The rest of the matches all went the way the rankings would suggest except at 174 pounds, where #8 Taylor Lujan scored the upset victory over # 6 David Kocer. Lujan scored a takedown on a last-second shot at the end of the first period, and then was able to hold off Kocer’s shots in the third period. Lujan won the match 3-1.

The dual really came down to the 197 pound match, where #11 Nathan Rotert finally put the Jackrabbits ahead for good, getting a 5-1 decision win over Jacob Holschlag. Holschlag gave up a takedown in the first period and was hit for two stalling points in the second period trying to keep Rotert down.

UNI’s Jack Wagner lost by fall to #1 Seth Gross in 1:32. Gross wrestled at his traditional weight after bumping up to 141 last Thursday night. Logan Ryan and Isaiah Patton both lost as well, Ryan by major 15-1 and Patton by decision, 4-2.

Drew Foster and Carter Isley won both by decisions. Isley doing so on a takedown on the edge with just 10 seconds left in the match. Foster had a workman-like 8-4 win over Martin Mueller, who led in the match at one point 3-2.

UNI is next in action in two weeks, February 3rd, when they travel down to Stillwater to take on the Oklahoma State Cowboys.