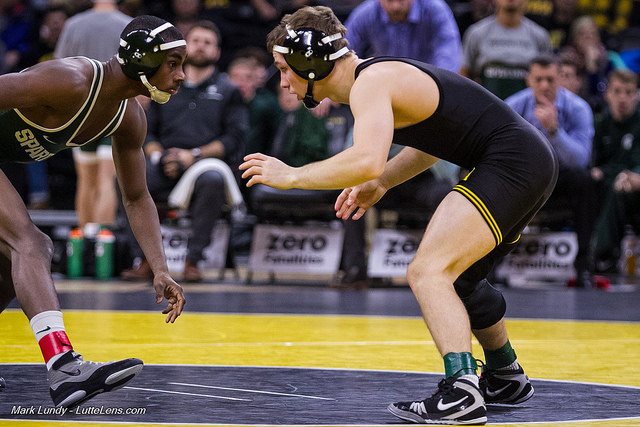 The Iowa Hawkeyes dropped their first dual meeting of the season today in Columbus as the top ranked Ohio State Buckeyes won six of ten matches fueling them to a 22-12 victory. The Hawkeyes managed to come out on top of three of the duals top ten matchups, but in the end the upperweights for the Buckeys over powered their Hawkeye counterparts.

Leading things off was a top ten meeting between Ohio State’s #3 ranked Nathan Tomasello and Iowa true freshman, #9 Spencer Lee. Most of the discussion around this matchup heading into the dual centered around the experience edge Tomasello would bring into the dual, but that wasn’t the case today. On the strength of a second period rideout and two escapes, Lee downed the former NCAA champion 3-2 to put the Hawkeyes on the board first in the dual.

The Buckeyes notched back-to-back victories at 133 and 141 pounds as #2 Luke Pletcher and #11 Joey McKenna managed victories over Paul Glynn and Carter Happel respectively. Glynn was able to stave off the major decision from Pletcher, falling 8-2, while McKenna earned a bonus win over Happel, 13-2.

Things turned back to Iowa’s favor in the middleweights, starting with senior Brandon Sorensen’s 4-2 decision over #6 Ke-Shawn Hayes at 149 pounds. With the match knotted at 2-2 and one minute to go Sorensen picked up the match clinching takedown to go up 4-2. Sorensen finished the rideout to give Iowa their second win on the day.

Iowa sophomore Michael Kemerer provided the Hawkeyes with their third top ten dual matchup victory on the day following his 8-4 decision over the #7 ranked Micah Jordan. With a 4-0 lead entering the third period, Jordan made things interesting picking up two takedowns, but Kemerer was able to fend off the Buckeye to put Iowa back out front in the dual score, 9-7.

Winning a tough match was #8 Alex Marinelli, who downed #12 Teshaun Campbell, 4-1 at 165 pounds. Making his return to his home state was Marinelli who picked up a first period takedown to lead 2-0 after the first period. Campbell followed by riding Marinelli the entire second period, and got an escape early in the third. With the match on the line Marinelli picked up his second takedown of the match and finished the rideout to seal a 4-1 victory.

Moving to 174 pounds head coach Tom Brands elected to go with freshman Kaleb Young instead of the usual starter, Joey Gunther. Unfortunately #3 Bo Jordan proved to be too much on his feet, as the Hawkeye fell by a final score, 10-5.

The Buckeyes then closed the dual out on the strength of their uppwerweights, getting a 17-6 major decision from #2 Myles Martin over Mitch Bowman, 17-8. Bowman picked up two key takedowns late in the match to fend off what looked like a potential technical fall for the Buckeye. The win by Martin put Ohio State back out front, 14-12.

The Buckeyes won the final meeting between top ten opponents as #1 ranked Kollin Moore downed Cash Wilcke 6-3 with all of the Buckeye’s scores coming via takedown.

Brands made his second lineup shakeup at 285 pounds opting to go with sophomore Steven Holloway instead of junior Sam Stoll to take on the #1 ranked Kyle Snyder. The Olympic champion made short work of the Hawkeye backup, cruising to a 24-9 technical fall to finalize hist team’s win.

Up next the Hawkeyes will return home to face Michigan in a Saturday night dual.