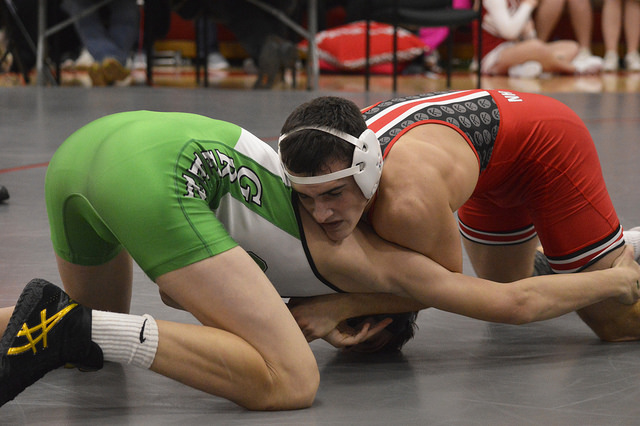 We are still two months away from Team Iowa hopping on a bus and traveling east for the Pittsburgh Wrestling Classic where they will face WPIAL opponents in a battle of bragging rights for our state. We will see 13 seniors from our state take to the mat, and while we are still a ways out from the lineup being selected, there is no harm in having some fun and taking a look a the most recent snapshot of rankings to determine who will be on the team.

A couple of very important qualifiers before reading the below. First, and maybe most important we are looking at the lineup based on where the Iowans are ranked in the most recent set of IAwrestle rankings (01/16/2018). We are not going to assume any weight shifting at this time. We understand that leaves some very talented guys off the roster. Second, is how we determined the list below. We selected the top ranked senior from each class. Almost every weight TOM’s national rankings was used as the deciding factor for “The Leader”. Further weight-by-weight analysis is included below.

Finally, IAwrestle does not have the sole deciding power to determine the team so the below should not be reflected as such.

Editor’s note: Additionally, there are no plans for IAwrestle’s War at West Gym to be used as a wrestle off to determine Iowa’s lineup. The idea is only a suggestion for helping decide weight’s with no clear leader.

Aside from the fact that he is one of the only ranked seniors to appear across the three classes, Gottschalk is the most credentialed of our trio listed, with his 2017 7th place state medal.

A rather obvious pick for Biscoglia at this weight. A two-time state champion looking for his third, rated #10 nationally there is little doubt that the ideal lineup features the Waukee prep. Providing some depth is returning state champion Grayson Kesterson. I know the above states we selected our lineup based on where the wrestlers are competing today, but with a five pound weight allowance in this event Kesterson is a target to drop down.

Probably the most obvious weight where it seems criminal that one of these wrestlers would stay home, right now Underwood’s Thomsen is the 126 leader based off the most recent head-to-head with Teske. These two have been among the top pound-for-pound wrestlers in the state virtually their entire careers, so it wouldn’t be surprising to see one of them make the move to 132 for the PWC.

This weight is a bit of a three headed monster. There is the nationally ranked Bennett, Fargo All-American Zach Price, and returning state champion Matt Robertson all in contention at 132 pounds. Not only does Bennett hold the edge in national ranking and recent head-to-head with Price, but Robertson coming off a regular season loss to both Price and 2A junior Will Esmoil puts him in the backseat for the moment. In my honest opinion the winner of the 3A state tournament should square off with Robertson at War at West Gym to settle any doubt.

A pair of future Panthers lead the way at 138, Blockhus and Fox seem like the obvious guys at this weight. Ranked inside the top ten nationally and looking for a third state title (and fourth finals appearance) Blockhus is the rightful leader, but given his history of wrestling up outside the regular season, he is yet another potential candidate to bump. That would leave Fox along with 3A’s Wennermark scrapping for the spot and if either of Price/Robertson decide to move up in March this could be a strong weight for Iowa.

This weight is a little more difficult to pick a clear leader though New Hampton’s Noah Fye is probably the most proven in terms of national credentials at the moment. Like the 132-pound weight-class the battle for this spot could be a determined in a “War at West Gym” matchup to detriment who should represent the state.

Heading into 152 we see an abundance of talent with four guys all headed to wrestle on the Division I level next year. The pack leader is the nationally ranked Grant Stotts, who could wrestle in his fourth finals and pick up his second state title next month. Also potentially finishing as a two-time state champion is 2A’s Judge who is looking to repeat the same weight from a year ago. Additionally, 3A’s #2 ranked Lara defeated Judge at last year’s War at West Gym and certainly warrants attention, and Trey Brisker is looking to closer out a strong career at Wilton.

This is another strong weight for Iowa with two guys ranked nationally, and Iowa City West’s Brands checking in at #8. In the past we have typically seen Brands make the transition to freestyle after the regular season concludes, but with a chance to wrestle in the “Rose Bowl of High School Wrestling” we will see if that changes. Brands is looking for his third straight state title, and his main challenger would be 2A’s Ramirez who is looking for his fourth state title (though first in Iowa).

Anthony Sherry, Logan Schumacher, and Ben Lee are all great wrestlers, but Joel Shapiro is ranked #3 in the nation for a reason. Through January 17th Shapiro had surrendered all of one point during the regular season. Enough said.

Another strong weight that if it weren’t for West Liberty’s Esmoil’s national ranking it would be a bit tougher to identify the true leader. Hagen, Sloan, and Gordon are all solid wrestlers with impressive resumes, but as of today Esmoil looks like he would be the guy.

Carrying the torch due to ranking is Iowa City West’s Francis Duggan, though most would be quick to point out that he has yet to compete in an Iowa high school match. If Duggan wrestles this weekend through the end of the season I believe he deserves consideration, though any of the other options listed as contenders would be strong candidates as well.

It’s hard to say which weight is the most interesting, but the heavyweight spot is definitely near the top of that list. If Iowa rolled with 3A’s Sanders Team Iowa could be well off, but the truth is both McConkey and Lawson from 2A are every bit as good as Sanders. Sadler is the favorite to bring home the 1A title and Solon’s Linderbaum could prove to be a good option as well.