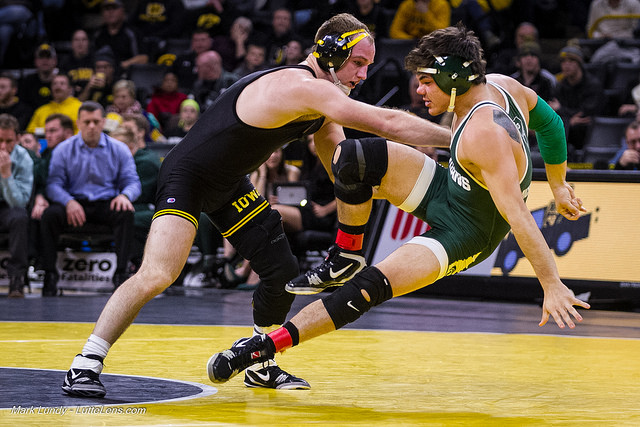 The Hawkeyes will be continuing the historic wrestling rivalry with #6 ranked Oklahoma State this Sunday. Recently the Hawks jumped up to #5 in the national rankings, and pulled slightly ahead of Oklahoma State who had been ranked higher all season, but this dual is going to be hotly contested by both teams. On paper, this dual features 16 nationally ranked wrestlers, 9 from the Cowboys, and 6 from the Hawks. Of note, Five Hawkeyes will be putting their undefeated records on the line this Sunday. Brandon Sorensen, Michael Kemerer, Alex Marinelli, Cash Wilcke, and Sam Stoll have all navigated the season thus far without taking a loss and will look to continue that trend.

Right off the bat the dual starts off with one of the marquee matches of the bout, #11 Spencer Lee vs #6 Nick Piccininni. This will be a great test for Spencer against the returning NCAA fourth place All-American, who has a win over the defending NCAA champ at the All-Star Classic this preseason. A win here would definitely solidify Spencer into the top eight going forward.

#4 Kaid Brock will be a considerable favorite in the 133 pound bout. Paul Glynn is riding some momentum after a pin against Michigan State last week, and will have to stay competitive in this match to avoid giving up bonus points to Okie State’s returning All-American at this weight. Iowa will be similarly outmatched, on paper, at 141 pounds with Carter Happel set to face #4 Ranked Dean Heil, who is the two-time defending NCAA champion at this weight class. Though Heil tends to wrestle a little closer to the vest than most, he can often execute in the clutch to get the winning takedown to ice the match when he needs to. Happel will have a tough road ahead of him if he wants to upset the NCAA champ in Carver, and may require longer than seven minutes to do it.

#2 Sorensen will have a tough opponent at 149 pounds. Though Boo Lewallen is ranked #13, he is very slick on his feet and very quick at getting to the legs. Sorensen will have to be ready to go from the opening whistle. That being said, Sorensen has been one of the most consistent wrestlers in the Hawkeye lineup during his time at Iowa, and he should definitely be favored. Much like Heil in the weight class prior, Sorensen is almost always able to execute in the clutch to get the match winning takedown in a close bout, and when he gets his hands locked around a leg he finishes far more often than not.

At 157 we have another ‘on paper’ mismatch with #2 Kemerer vs unranked Jalen Blaylock from OSU. Kememer should be expected to get bonus here like he has against every opponent he has faced this season except one, who was ranked in the top eight (and also his former HS teammate).

At 165 we have another marquee matchup of the dual with returning All-American #7 Rogers vs #11 Marinelli of the Hawkeyes. This one is a tossup on paper, with the composition of the 165 pound weight class nationally, there is not much separation between the All-American contenders in this weight class. In a close matchup like this, Hawk fans have got to be feeling pretty good about having The Bull’s pace and ferocity in their corner.

Following that we will have another good matchup with Joey Gunther facing #12 Jacobe Smith of OSU. Gunther tends to be able to wrestle most guys close, so this will likely be a match decided by 1-2 points.

At 184, we will have Mitch Bowman vs #19 Keegan Moore. This match figures to be about a tossup on paper. Bowman has been right around that cusp of getting ranked and it will be freshman Keegan Moore’s first match in Carver, Bowman could very well take this matchup, but it could also go the other way. Either way, it will be a key match in deciding the dual outcome.

Moving up to 197, we have one of the final marquee matchups of the dual, in #5 Cash Wilcke vs #3 Preston Weigel of OSU. Weigel won the match last year 6-0, which included backpoints on a tilt. Weigel is known for his suffocating top game, and the mat wrestling in this match will be the key factor in who comes out on top. Wilcke looks muched improved this season in all positions, and it will be a good measuring stick for Hawk fans to see how much he’s closed the gap on Weigel since the last meeting.

The dual will end up with #3 Sam Stoll vs #11 Derek White.  White is similar to OSU’s heavyweight last year Austin Schafer, in that they both started out at 197 in college and successfully bulked up in the OSU weight room. This should be a very entertaining match to close out the dual, and its very possible that the dual could be decided by the outcome of heavyweight. Sam Stoll is the favorite here, but don’t be surprised to see a close match with the dual potentially on the line.

If you are interested in computer projections, WrestleStat projects the hawkeyes to win the dual, 19-13.

One thought on “Hawkeyes Set to Face Cowboys at Home”