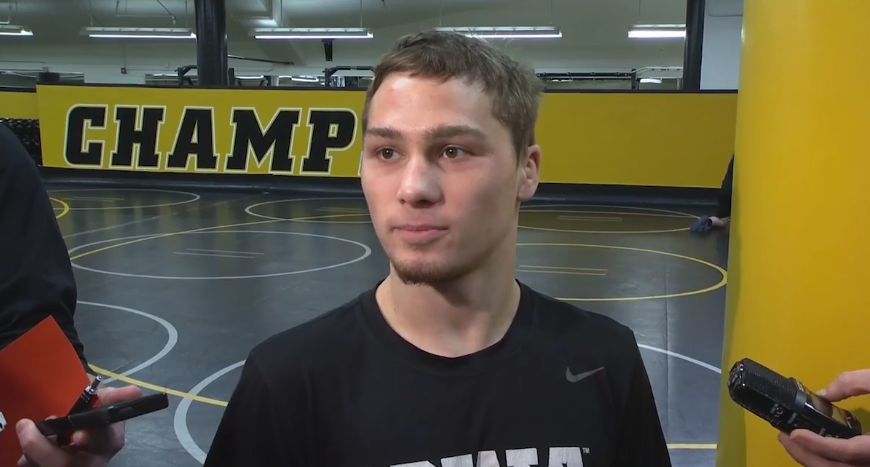 That was the opening remark made by head coach Tom Brands today in the Dan Gable Wrestling Complex in Iowa City. After two months of speculation the decision to pull Lee’s redshirt was officially announced by the university. It was first teased Tuesday on social media, before being confirmed earlier today by Hawkeye Sports’ Darren Miller.

The decision to pull Lee’s redshirt was a mutual one made by Lee, his family, and the coaching staff. There was little doubt as to whether or not Lee would be able to be an impact wrestler for this team, but Brands wanted to make sure doing what was best for his team didn’t come at the detriment of his athlete. After watching Lee have back-to-back successful outings Brands and the Lee family finally felt comfortable on the decision to start him as a true freshman.

“I just don’t think sitting on the bench is the best thing for me.” Lee told the media when he was asked about the redshirt decision, “Maybe we could have pulled it early, I don’t know. That was the decision we were waffling back and forth. It’s done now and I am just ready to wrestle.”

The decision to put Lee in the lineup comes a couple days before the Hawkeyes resume their conference schedule against Michigan State. To begin the season the Hawks compiled a 7-0 dual record and are coming off a Midlands title where they finished almost 50 points ahead of their nearest competitor.

Despite Iowa’s large margin of victory at the Midlands, the Hawkeyes did have a couple close calls earlier this season where they narrowly edged Illinois 18-17 at home and picked up a closer-than-the-score-appears 23-15 win at Rutgers. The decision to put Lee in the lineup despite those close calls never entered the mind of Brands, who stated as much today.

“You don’t make decisions on one or two dual meets or whether he is going to score ‘X’ points at the Midlands tournament.”

So far the move has paid off as the Hawkeyes maintained their undefeated streak to begin the year without the assistance of Lee, who didn’t begin practicing live until October due to a knee injury he suffered in early 2017. Many believed that Lee’s Midlands performance would be the deciding factor of whether or not he would have his redshirt pulled, and while that may be true, the decision was made earlier than many probably suspect.

“He told me at Midlands I was wrestling (against Michigan State).” Lee said, “That was before the quarterfinals, that was before Edinboro’s guy. I was like sounds good.”

It should be noted that “Edinboro’s guy” was Sean Russell, a returning NCAA All-American that placed seventh at last year’s nationals. Lee would win the meeting with Russell by the score of 17-2 which means Brands had already seen enough from his freshman prior to him picking up his first marquee victory in his career.

And while that win will most definitely put Lee on the map in the national picture, his coach wasn’t going to make any predictions regarding Lee’s potential this season. Instead the former three-time NCAA champion heaped a different kind of praise onto his wrestler.

“He reminds me of me socially, not in wrestling. He would have whipped my tail when I was his age.”

Come Friday night fans will pack into Carver-Hawkeye Arena to watch potentially the best recruit in program history take the mat. Iowa is a stickler for tradition which means as long as Michigan State doesn’t request a draw for starting weight, we just may see Lee start the dual off. The thought of running out onto the floor in Carver has been something Lee has been envisioning since his middle school days.

“I imagined running into Carver the first time in seventh grade,” Lee said, “I watched Ramos pin one of the Penn State guys. It got so loud that I couldn’t even hear myself think. I was sitting next to my Young Guns coach I told him I think I would look pretty good in Black and Gold.”

Lee will take the mat Friday night in front of friends and family and he will be doing so alongside a familiar face to many of those people close to Lee. Hawkeyes sophomore Michael Kemerer was a high school teammate of Lee on a Franklin Regional squad that was considered one of the best in the country.

“He’s not the type of kid that wants to be watching.” Kemerer said of his teammate, “You see how hard he wrestles. He’s ready to be out there competing and wrestling for a national title right away.”

The journey to a national title begins this Friday night at 7:00 PM where Lee is scheduled to see freshman Rayvon Foley.  Even though Brands recognized why the Lee news was a big deal for his program, but he also considers the news business as usual for the team and his wrestler.

“He knows the number one thing is getting ready for his performance. So that’s where we are at he’ll be on the mat Friday night.”

One thought on “Lee Ready to Make His Carver Debut Friday”