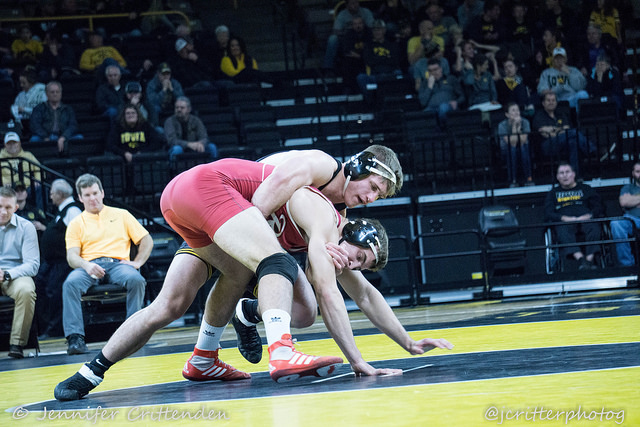 The Hawkeyes return two of their champions from last year’s squad, senior Brandon Sorensen at 149 pounds and sophomore Michael Kemerer at 157 pounds.

Live Stream is available through BTN Plus or Flowrestling Sessions I, II, and III.
Subscription required for either service. You do not need purchase both, one or the other will suffice.

Finals will be televised on BTN.

It’s been another workman like season for Iowa’s Joey Gunther, who is off to a 7-0 start at 174 pounds seemingly under the radar. He has yet to notch a high profile win on the season, though during the Hawks east coast road trip his 5-4 decision against Rutgers’s Joe Grello proved to be a pivotal swing match in what was a tight dual. Gunther isn’t flashy, but he has certainly gets the job done.

Looking forward to the field at 174 pounds Arizona State’s top ranked Zahid Valencia looks to be one of the bigger title favorites overall on the weekend. The next closest wrestler in the rankings to Valencia is SDSU’s David Kocer who is ranked #9. Three other ranked wrestlers check in with #14 Christian Brucki of Central Michigan, #15 Dylan Lydy of Purdue, and #20 Seldon Wright of Old Dominion listed as expected contenders.

Since Gunther competed at 165 pounds last season he has yet to face a majority of the wrestlers he will see this weekend. The exception being Lydy who Gunther beat 8-4 last year during Big Ten dual competition. This could be a springboard-type weekend for Gunther to push himself into the rankings for the first time in his career.

Yesterday, we announced that Iowa State will be sending five wrestlers to the Midlands. One of those names was Danny Bush, who transferred to the Cyclones earlier this year and he will be making his Midlands debut, but whether that will be at 174 or 184 pounds is unconfirmed. Bush started the year up at 184 pounds, the same weight he earned All-American for Iowa Central last season. However, Kevin Dresser has now tried three different starters at 174 pounds to little result and the head Cyclone has also maintained his stance that true freshman Marcus Coleman will redshirt this season. Rather than wait a season on the bench, Bush made the descent down to 174 earlier this month for the UNI Open, so it stands to reason that is where he is looking to compete this weekend.

Bush enters the Midlands with a 12-5 record, and his only loss at 174 pounds was in the finals of the UNI Open against his teammate Coleman.

At 184 pounds we will see Hawkeye junior Mitch Bowman make his Midlands debut against an expected field containing five ranked opponents. Entering with a 5-2 record Bowman is still seeking his first marquee victory and this weekend he will have the opportunity to do so against several familiar face. Leading the ranked contingent is Wisconsin’s #8 Ricky Robertson followed by Illinois wrestler Emery Parker at #10. Those two are the fields only two top ten ranked wrestlers with Rutgers’s #11 Nick Gravina, Central Michigan’s #15 Jordan Ellingwood, and Penn’s #17 Joe Heyob rounding out the rest of the ranked competitors.

Bowman has already had an opportunity to face two of his ranked competition in Parker and Gravina falling in close matches 5-3 and 4-0 respectively.

If you thought the fact that Iowa had two title contenders at 149 was impressive wait until you get a load of this 197 pound bracket. The top ranked wrestler expected to be at the Midlands is #6 Nate Rotert of SDSU, but not too far behind him is Iowa sophomore Cash Wilcke who is the nation’s current #8 ranked wrestler. Jeric Kasunic (#10) of American is the third top ten wrestler expected to be at the Midlands with #13 Corey Griego of Oregon State and #15 Frank Mattiace of Penn rounding out the field.

Despite all that none of the above mentioned wrestlers may end up bringing home the Midlands crown. According to his personal Twitter account All-American Pat Downey, who transferred to Iowa this summer, says he will compete at 197 pounds this weekend providing the field with an unranked threat for the top spot. Additionally, freshman phenom Jacob Warner could also be headed to Illinois this weekend, giving the Hawks three title contenders.

Wilcke enters the Midlands with a 7-0 record and also having the most history with wrestlers in the field. Wilcke lost a 9-5 decision to Rotert during last season’s dual between Iowa and SDSU. Last season Wilcke seemed a 184-pound wrestler competing up a weight so now that he has fully adjusted to wrestling at 197 we will see if their potential second meeting has a different outcome. Looking at wins against the field Wilcke managed to defeat Mattiace 4-3 at the NCAA tournament last season, won 3-1 over Illinois’s unranked Andre Lee earlier this month, and has a 1-1 series split with Wisconsin’s Hunter Ritter (note those matches came during their true freshman seasons at 184 pounds).

The hype surrounding Downey’s season debut is rather large, though when he tweeted the news he would be at 197 this weekend it left many scratching their heads. With Wilcke already a top ten wrestler, wouldn’t it make sense for Downey to drop down to 184 where he could challenge Bowman for the spot? Downey later confirmed that this is in fact the plan, that the Midlands competition weight isn’t where the former All-American expects to be competing down the stretch. As far as his record against the field Downey has just two wins, but both of them are decisions over Rotert.

Rounding out 197 is Warner who has burst onto the scene in the first couple months of his wrestling career. After winning the team’s wrestle offs in early November Warner went on to win the Luther Open defeating a Division III NCAA champion in the finals, the Lindenwood Open where he won by major decision over the nation’s current #2 ranked Willie Miklus in the finals, and he took second at the UNI Open. His only loss to date is to Oklahoma’s Jake Woodley, with Warner winning the pair’s earlier meeting this season at Lindenwood.

The final Hawkeye we highlight is junior Sam Stoll who is looking to buck the trend of third place finishes after doing so back-to-back seasons. Counting Stoll, there are eight ranked heavyweights listed as expected contenders with the highest being Arizona State’s #4 Tanner Hall followed Oregon State’s #6 Amar Dhesi and #8 Stoll.

Stoll carries a 1-2 record against the top competition, with a loss last year to Hall, 2-1 in the Midlands semifinals and he split 1-1 in his career with Eastern Michigan’s #20 Gage Hutchison. Stoll won the most recent meeting with Hutchison by fall at last year’s Midlands. Stoll is 6-0 on the year with five of those victories coming by fall.

Last, we cover Cyclone heavyweight Gannon Gremmel, who like Bush was just announced yesterday as Midlands contender. So far the redshirt freshman has compiled a 10-2 record while serving as Marcus Harrington’s backup through the first two months of the year. One of Gremmel’s losses came to high school rival Carter Isley of Northern Iowa early in the season, but Gremmel most recently avenged that loss with a 3-2 SV win at the UNI Open. This will be Germmel’s first crack at the Midlands.