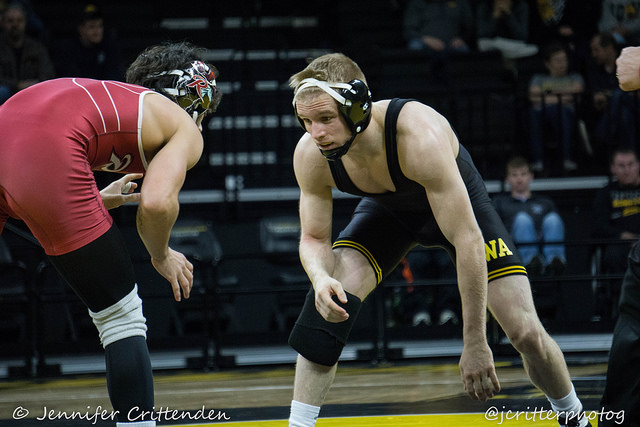 The Hawkeyes return two of their champions from last year’s squad, senior Brandon Sorensen at 149 pounds and sophomore Michael Kemerer at 157 pounds. We also know that Iowa State doesn’t plan to send their whole lineup to the Midlands, but they are planning as few as four and as many as six wrestlers.

We lead things off at 125 pounds where Iowa is expected to bring a pair of true freshmen, Justin Stickley and Spencer Lee. Everyone in the wrestling community is still buzzing over Lee’s debut at the UNI Open and whether or not his redshirt will get pulled this season. Head coach Tom Brands was non-committal when asked whether or not Lee would be attending the Midlands, but according to Lee himself that’s what he believes the plan is for him to compete next weekend at the tournament. Adding more buzz to the Lee interview was Brands’s comment, “Free the Lee. The thing is Lee is like Houdini. He can free himself.” which is now leading many to believe that a strong performance this weekend may lead to him starting.

Looking to the field there will be eight ranked wrestlers in attendance, with three of those being in the top ten. The drool-worthy matchup would of course be a potential meeting between Lee and the #2 ranked Nick Suriano of Rutgers, who will be the top contender in the field. Obviously if Lee manages to come out on top of one the nation’s top NCAA title contenders the “pull the redshirt” discussion will shift into overdrive.

Iowa’s current 125-pound starter Justin Stickley will enter the tournament with a 6-4 record, and is coming off a 3-0 victory in his last appearance over Maryland’s Brandon Cray.

The Hawks are expected to bring a pair of wrestlers at 133 as well this weekend with senior Phil Laux still in a battle with sophomore Paul Glynn for the starting spot. Through Iowa’s first seven duals Laux has received five starts to Glynn’s two, but Brands has made it clear he is still looking for wrestlers to step up at all of the lightweight classes. Seven ranked wrestlers are scheduled to compete at this weekend at 133 pounds. Laux enters with a 7-1 record and Glynn is 2-3 on the season.

Looking to the Iowa State field, Kevin Dresser has made no indication at who he might be sending, but based on his team’s early season performances we wonder if freshman Ian Parker and sophomore Markus Simmons make the trip east. After opening the season with a Harold Nichols Open title, his win over Austin DeSanto, and a Lindenwood runner-up finish Parker looked to be in full control of the starting spot, but the freshman is 1-4 in his last five matches. Simmons struggled out of the gate, but was solid at Lindenwood where he finished fourth, and he recently added a UNI Open title.

Given Parker’s slump and Simmons riding a hot streak it wouldn’t be surprising to see if Dresser opens the competition back up for this spot and sends them to the Midlands.

The final lightweight up for discussion will be 141 pounds where the Hawkeyes figure to send both sophomore Vince Turk and freshman Carter Happel to see if either can mange to take a step forward in their lineup battle. With just four ranked wrestlers this is one of the lighter weights in terms of competition as a whole, with only one of those wrestlers in the top ten. After starting Vince Turk the team’s first five duals, Brands opted to go with Happel on his team’s Big Ten road trip to Rutgers and Maryland with the freshman splitting the starts 1-1. His win came against Maryland’s #18 Ryan Diehl – who is one of the four ranked wrestlers scheduled to be in the field.

That win certainly put Happel firmly back into the discussion as a potential starter for the Hawkeyes and its the only marquee win by a 141 pound wrestler for the Hawkeyes this season. If Happel is able to build off that performance he could move into the starting role permanently.

UPDATE: The Midlands Twitter account put out their 141 contenders and listed Iowa State’s Kanen Storr (this has been confirmed as not 100% official). The potential addition raises the number of ranked wrestlers to five at 141 and the Cyclone freshman would be the second highest ranked competitor. A fifth place finisher at this tournament a year ago, Storr would be seen as a legit title contender.