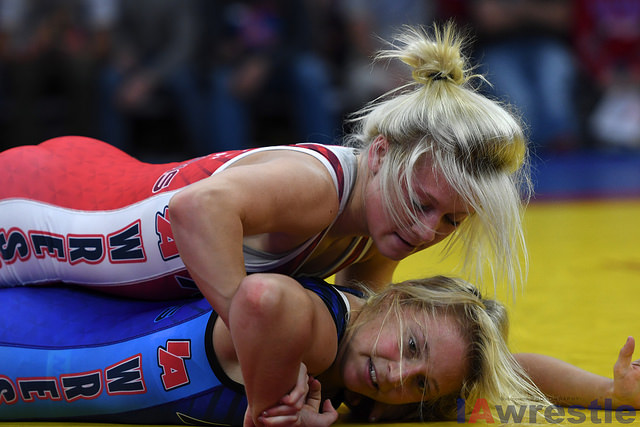 For anyone who has followed Iowa women’s wrestling over the last several years, the success of South Winneshiek’s Felicity Taylor is no close-guarded secret. The senior 106-pounder has assembled quite the resume for any individual, including becoming the first girl to win an Upper Iowa Conference championship. Since accomplishing that as a sophomore, Taylor has added another conference title and has big goals of making it three by the end of the 2017-2018 season. As an avid supporter of the wrestling community, Taylor is now doing her part to give back and help share her success with young female wrestlers in the area.

“The camp actually started as an assignment for my TAG (talented and gifted) class,” noted the No. 8-ranked individual in the state in Class 1A and No. 3-ranked female wrestler in the country. “We basically got to pick any project that we wanted, so I saw it as a great opportunity to help promote women’s wrestling!”

Taylor did her fair share of research, looking at information on where she may be able to continue her wrestling career after graduation next spring. However, her findings were somewhat disappointing to her.

“I learned that there is only one college in the entire state of Iowa that offers a women’s college wrestling program,” she revealed. “I was told that I could go to the University of Iowa and wrestle for the Hawkeye Wrestling Club, but I wanted to be on a real team where I could regularly compete in dual matches, not just a few open tournaments throughout the season.”

Taylor’s next step was to find a way that she could help do something about the shortage of wrestling resources for females and help bring the sport to a level that provided plenty of opportunities for young wrestlers like her.
“I decided that the best way to help promote the sport was to start with youth wrestlers,” said Taylor, who did not start wrestling herself until she was in high school. “I decided to plan an informational and instructional camp that will help teach interested female wrestlers about the sport that I have grown to love.”

Taylor gave a presentation to a group of students in kindergarten through eighth grade that briefed them on the basics of the sport and helped show the young students about the opportunities.

On Sunday, Nov. 5, Taylor held her camp in the South Winneshiek High School wrestling room in Calmar. A group of five girls, varying in ages and understanding of the sport, attended the camp.

“A few of the girls were somewhat familiar with the sport as they are regulars at the Warrior Mat Club or have older siblings that wrestle now or in the past,” continued Taylor. “There were also some who had never seen a wrestling match before, so then I started the camp off with many of the basics and techniques required to be successful on the mat.”

After a brief warm-up for the camp-goers, Taylor spent over an hour going over basics such as wrestling stance, hand-fighting, down-blocking, penetration steps, single-legged takedowns, and breakdown.

“I was surprised that the girls did not have a lot of questions; they all caught on very quickly,” stated the successful young wrestler. “My high school coach, Jake Elsbernd, and TAG instructor, (Mike) Wenthold, were there and helped out, but I was pretty much in charge of everything.”

Taylor was able to work one-on-one with all of the young wrestlers, as well as observe as they wrestled one another throughout the evening.

“It was an awesome experience to be able to hold this camp and do my part to promote the sport of wrestling,” said the South Winn senior. “I did not have these opportunities when I was younger, so I want to make sure I am doing whatever I can to generate interest in the sport and help girls become comfortable with the sport. For many girls, myself included when I first started wrestling, it is a scary feeling knowing that you will be going out and wrestling a guy who is stronger and capable of hurting you. I want to change that stigma and help girls understand that with hard work and perseverance, they can be the ones to control the match.”

Taylor also discussed the impact that she hopes to make on female wrestling on a larger scale.

“I think it has to start on a local and community level,” closed Taylor. “I hope that by holding camps like this and being at the Mat Club wrestling events on a regular basis, I can help spread the popularity of wrestling to other young girls in the community and help the sport gain support and become more prominent nationwide.”