Iowa Central Helped Get Richie Lewis to Where He is Today 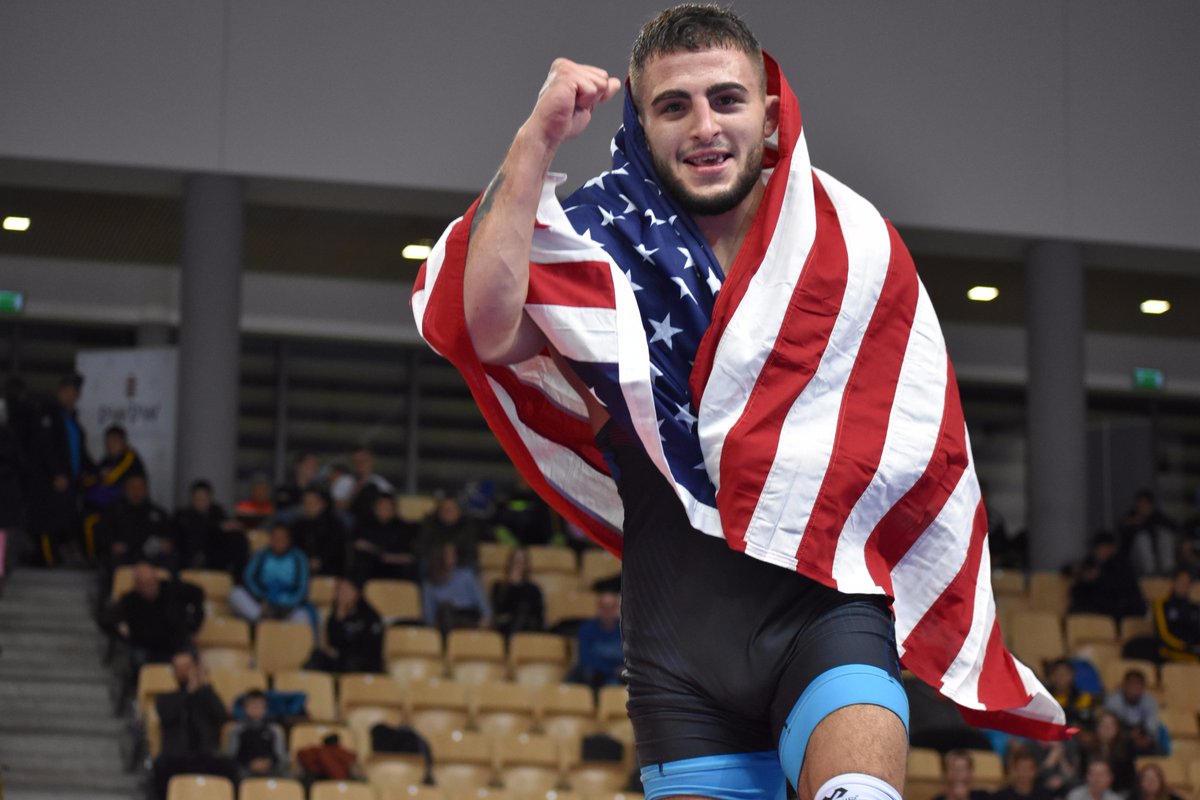 In late November, USA Wrestling sent 24 wrestlers to Bydgoszcz, Poland to compete at the first ever UWW U23 World Championships. With USA Wrestling coming off one of its most successful years as a collective unit at the Junior and Senior World tournaments, expectations were high for the American squad. Unfortunately out of those two dozen athletes only one was able to come home with a gold medal with that being Rutgers’ Richie Lewis.

But before Lewis was a standout for the Scarlett Knights he was a Dirty Dodger. Well that’s an unofficial title. In actuality Lewis was a two-time All-American at Iowa Central Community College under head coach Luke Moffitt. While its been been a few years since Lewis has donned a Triton singlet the New Jersey native learned a lot during his time in Iowa, and those experiences shaped him into the man he is today.

In addition to strengthening his wrestling skills the Iowa Central room also boosted Lewis’s confidence on the mat. Something he carried with him to Poland.

“My expectations were to go there and win the whole tournament.” Lewis said of U23’s, “Going in I said ‘This is my first international tournament I definitely want a medal. I wouldn’t be too upset with a bronze, but I definitely want to win gold.’ The day of the tournament I said f*** that man, I want to be a gold medalist, I don’t want a bronze. That was my mindset. I am winning gold no matter what.”

To truly know RIchie Lewis we need to go back. Way back. Back to a time when Lewis was wrestling for Toms River East High School in New Jersey. It was a tough time for Lewis who was struggling academically and at home. Lewis told IAwrestle that his living situation was anything but your typical living at home with both parents. At various points he lived with his aunt, friends, an uncle, and finally with his mother in a home she was renting.

On the mat Lewis was a three-time state medalist, but was never able to win that state title he was always chasing. Ranked #198 in D1CW’s 2013 senior class rankings, Lewis had Division I offers, but with a low GPA and student debt looming he decided to open his options up.

“Coming out of high school I was a tail end guy. I was getting recruited by Division I programs, but not getting offered much (scholarship money). I had a 2.1 GPA as far as the Division I platform goes, but I graduated with 1.8 as far as my high school goes. So the whole time I thought I didn’t pass the clearing house until very late in the process. I didn’t really want to pay for school or take out loans, and I got a full scholarship to Iowa Central. When I went out there I just loved it.”

“We have always had a great connection here at Iowa Central with New Jersey.” Moffitt told IAwrestle, “I first heard about Richie midway through his senior year from the Geogehgan twins that were wrestling for us at the time.

“I knew he was solid, but what I like most was that he was trying to take away Anthony Ashnault’s fourth state title. Richie lost 3-1 in the semi’s and got third. Instead of moving to a different weight he chose to take a challenge that most wouldn’t. I admire that; someone looking for a good fight and wanting to take on the best.”

What happened next to Lewis may sound strange. It was definitely strange for an east coast high school kid trying to find a new home, but the connection with coach Moffitt was instant. Even if the experience was a bit outside the ordinary.

“Coach Moffitt picked me up from the airport and took me straight to his buddy’s house. He said ‘I am going to show you what Iowa is like.’ He took me down a dirt road, took me to a farm, to wrestle a billy goat.”

“We went straight to the farm and I pet the horses and I saw the billy goat and it started charging me. Moffitt said grab it by the horns and see how long you can hold on. I thought he was joking. I am from New Jersey so we don’t see that stuff. I said screw it and grabbed the goat by the horns a little bit. From that point I knew this is where I wanted to be.”

“My freshman year I was originally a 141 pounder, then I was a 149 and was having a little trouble with my weight. My body was growing. I hit puberty pretty late. Moffitt told just to focus on wrestling and go 157 pounds. So I started at 141 and then went to 149 all year. The last dual meet of the season Moffitt said go 157 and then next two weeks until Regionals just focus on lifting and getting better, don’t focus on anything else. That’s what I did.”

The move paid off, as Lewis would go on to reach the NJCAA finals that season where he would fall to Yoanse Mejias, 7-3.

The day of the tournament I said f*** that man, I want to be a gold medalist, I don’t want a bronze.

At that point Lewis was all in with Moffitt. He came back for his sophomore year at Iowa Central with a new found purpose at 157 pounds. By the time the NJCAA tournament rolled around he found himself the #1 ranked wrestler and he was ready to finally win his first title.

Unfortunately his first round opponent, a wrestler by the name of Ryne Cokeley from Neosho County Community College, had other plans. With a double digit lead in the third period Lewis went in for another takedown to continue to build his lead. Cokeley managed to slip a headlock around Lewis and pinned him.

“It’s probably one of the lowest points I’ve been at in my life.” Lewis said recalling the match, “I didn’t want to wrestle. I told myself I was done.”

If you were to pick a moment at Iowa Central that potentially changed the course of Lewis’s life you could look right there. With his team needing every point possible to overcome Clackamas Community College for the team title, the loss of the top ranked Lewis in the first round was a big blow. With his title hopes dashed Lewis was ready to throw in the towel, but when his team came to him and asked him to wrestle for something bigger than just himself, it changed his lowest of lows to a new high.

“They didn’t know what to say,” Lewis said of his teammates and coaches trying to comfort after his loss to Cokeley, “They said ‘Richie, man you need to come back for us because we know you don’t want to do it’. That’s when I had a revelation.

“I’ve always been kinda selfish and I didn’t come back for me I did it for my team. That’s when I learned real camaraderie. When those guys depended on me and needed me; that’s one of the higher points in my life when I came back when my team needed me.”

Lewis won seven straight matches to place third at 157 pounds, picking up a 14-1 major decision over Cokeley along the way. His 19 and a half points would prove to be pivotal as Iowa Central claimed the team title over Clackamas.

Now days Lewis can reflect back on his time at Iowa Central a more mature adult. Being in that Triton wrestling room molded Lewis into the man and wrestler that he is today. In high school Lewis was a rough kid looking for an opportunity to get out of a rut he felt he was in with his home life and to be around a new group of mentors. He found those in bunches in Iowa.

“I was just always bouncing around (at home) and I knew if I wanted to achieve what I wanted to achieve I had to get away and be in a place of like solidarity. I had to be alone, but also be around Mark Rial, Luke Moffitt who could mentor me and turn me into a man. I may have been 18 years old, but I was far from a man.

“I needed a figure in my life who could push me and who I trusted. When I went out on a visit, Luke Moffitt was that guy.”

When the time finally came for Lewis to move on from Iowa Central and find a Division I landing spot his home state program of Rutgers was no where near the top of his list. That wasn’t going to stop head coach Scott Goodale from recruiting Lewis, especially given the fact that the two came from the same hometown.

“Rutgers was one of my bottom choice my freshman year at Iowa Central and then I went out on a visit (at Rutgers). I was back home with my family. I didn’t have the greatest relationship with my parents growing up. I went out to Iowa Central and I grew up and realized a lot of things. I had a great relationship with my parents, and I still do. That was a huge factor. Being back with my family and enjoying that family aspect that I missed in high school that I didn’t get to experience.”

Thanks to Goodale’s continued interest, Lewis ended up back in his home state and he has already paid dividends. In addition to winning the program an age level World medal and being ranked in the top 10, Lewis was a NCAA qualifier for the Scarlett Knights in 2016. He missed all of the 2016-17 season with a shoulder injury, but he is back for his final season with big goals in mind. Among those are winning the Midlands and NCAA tournament.

If ever he needs a little motivation to this day he still reflects back to his time at Iowa Central to remind himself of a feeling he would rather not experience again.

“I still think about it. Before the U23 finals I try not to talk to too many people, but I make sure to call the important people in my life. One of those people I talked to before I wrestled in the finals was Pat (Downey). He told me, remember how you felt when you got pinned. Remember how you felt when you got beat (in the finals as a freshman). You took second, you took third, you never won. You never achieved what you wanted to achieve.”

Lewis was finally able to win a gold medal, and he’s just getting started.