Iowa Takes on Illinois in Final Home Dual of 2017 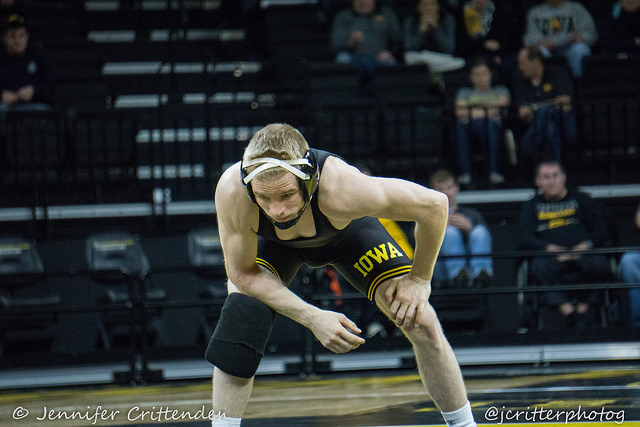 The Iowa Hawkeyes open conference dual action this Friday inside Carver-Hawkeye Arena when they welcome in border rival Illinois. This will be the Hawks final home dual in the year of 2017 as they are scheduled to hit the road next weekend for a pair a duals before closing out the calendar with the Midlands tournament.

On paper this figures to be a great dual coming in to Friday night with as many as 11 ranked wrestlers taking to the mat, and two potential ranked head-to-head battles. The biggest battle on paper would be between Illinois’ #2 ranked Isaiah Martinez and #14 ranked Alex Marinelli at 165 pounds.

But of course the other question that goes along with that is “will we actually see Marinelli wrestle?”. It wasn’t a huge surprise to see Marinelli miss the Iowa City Duals after reportedly missing wrestle offs with a minor injury. However, during the press conference following those duals Tom Brands told the media that Kaleb Young may be called upon to make starts vs Rider and Illinois. Young lost a tight battle to All-American Chad Walsh, 5-4 last weekend during the Rider dual.

Marinelli has expressed his willingness to wrestle last week, but given Brands has already hinted that the four-time Ohio state champion may already miss this dual, don’t be surprised if it is indeed Young who gets the call. According to the Cedar Rapids Gazette’s KJ Pilcher the only “OR” in this weekend’s probables will be Marinelli/Young. It should also be noted that Martinez competed this past weekend in Poland at the U23 World Championships.

The other ranked matchup in this dual will occur at 133 pounds where #16 Phil Laux will take on Illini freshman and #18 ranked Dylan Duncan. The pair met up last year at the Lindenwood Open, where Duncan came out on top 7-6. Laux is out to a 6-0 start on the year.

The rest of the dual is mainly comprised of lopsided matchups based on the rankings with Iowa favored at 149, 157, 197, and 285 pounds, and Illinois favored at 125, 174, and 184 pounds. Given the unbalanced nature of each individual matchup, this is a dual that should feature bonus points at a premium and luckily these two teams feature wrestlers that know how to score bonus.

Iowa features a trio of wrestlers off to a hot start, with Brandon Sorensen and Michael Kemerer each coming into this weekend having earned bonus victories in all four of their matches, and heavyweight Sam Stoll scoring a bonus win in three of his four wins. For their careers Sorensen and Stoll have earned bonus in over 40% of their matches, while Kemerer has scored bonus at close to a 70% clip. For the Hawks to continue their success three three will likely be leaned on in this dual.

This will also be an interesting dual to watch some of the newer faces in the lineup and how they handle their challenges. While its true both Laux and Young are also first year starters, both have a proven track record that have set them a step ahead of their fellow rookies. Looking to notch key upsets are Justin Stickley (125), Vince Turk (141), and Mitch Bowman (184).

After taking tough back-to-back losses at the Iowa City Duals, Stickley responded with a fall over Rider’s JR Wert in last weekend’s dual and Bowman managed to stay perfect after taking out Michale Fagg-Daves. Turk is looking to rebound from a tough loss to Tyson Dippery.

If you are in to computer projections, Wrestle Stat projects a Hawkeye victory, 23-11.