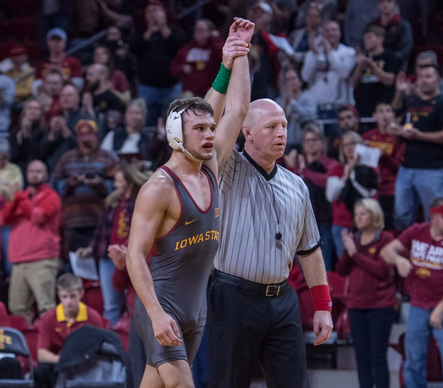 Iowa State will be back in search of their first dual win in the Kevin Dresser era this Sunday when the Cyclones face Rider University at 2:00 PM. Unlike other home duals, this one will take place in Stephen’s Auditorium which will provide fans with a much different atmosphere than Hilton Coliseum.

The Cyclones are coming off a weekend that saw ten of their wrestlers reach the podium at the Lindenwood Open down in Missouri. While none of the Iowa State wrestlers were able to come away with a title in the Open division (two did manage to win the freshman/sophomore division) there were several encouraging results that will give the Cyclones an air of confidence coming into this dual.

We are only a few weeks into the season, but so far the promise of the redshirt freshmen in the lineup is probably the most exciting thing about this Iowa State team. As many as four wrestlers from that class in the starting lineup this weekend, with one of those wrestlers coming off a strong debut.

In our season preview we highlighted that the 149-pound spot would be a battle between Jarrett Degen and Dante Rodriguez, and this weekend it was Degen who took the step forward. In the quarterfinals Degen notched a ranked win over Oklahoma’s #15 Davion Jefferies 11-6, and followed that up with a 5-3 win over teammate Rodriguez in the semifinals. Because of that Degen now finds himself in Flowrestling’s rankings for the first time at #17.

In Iowa State’s loss to Drexel in their dual opener, one of the more surprising losses came at 197 pounds where Sammy Colbray lost by fall to Stephen Loiseau. Coming in Iowa State’s highest rated recruit in 2016, the hopes were high on Colbray so to see him lose by bonus points was a shot to the gut. This past weekend Colbray bounced back taking third at Lindenwood.

The other two redshirt freshmen, Ian Parker and Kanen Storr are coming off second and fourth place finishes at Lindenwood, but so far the pair look like the future of Cyclone wrestling. Both are scheduled to have tough opponents this weekend with Parker taking on Anthony Cefolo and Storr will have a battle against Tyson Dippery who is coming off a runner-up finish at the Keystone Classic. Like Degen, Parker and Storr also find themselves at #17 in the latest set of rankings.

Making his season debut was junior Jon Marmolejo at 125 pounds where he placed fourth at the Lindenwood Open. Marmolejo’s presence at this weight is a huge boost for the Cyclones at this weight as only he and sophomore walk on Jacob Allison are the only two wrestlers on the roster that can make 125. For Rider we will see JR Wert, who was the Keystone Classic runner-up this past weekend.

Rider’s lineup features a pair of ranked wrestlers back-to-back with #8 BJ Clagon and #6 Chad Walsh at 157 and 165 pounds respectively. Coming into the dual the Cyclones hold the advantage of having three ranked wrestlers facing unranked opponents (versus Rider’s two) and they will be on their home mat. Because of this Rider will undoubtedly be hoping from some bonus out of their two stars.

For Walsh that’s been his calling card since day one as he become Rider’s all-time pins leader this past weekend. At 157 we may see a different story based on whether or not Clagon actually wrestles. Last weekend at the Keystone Classic Clagon had to medically forfeit out, so it is possible we see a backup this weekend. Fans looking for an opportunity to scout this Rider squad will have the chance on Friday, as the Broncs will be in Iowa City taking on the Hawkeyes (read our preview of that dual here).

If you are into computer projections, Wrestle Stat has this dual going to Rider 27-6.