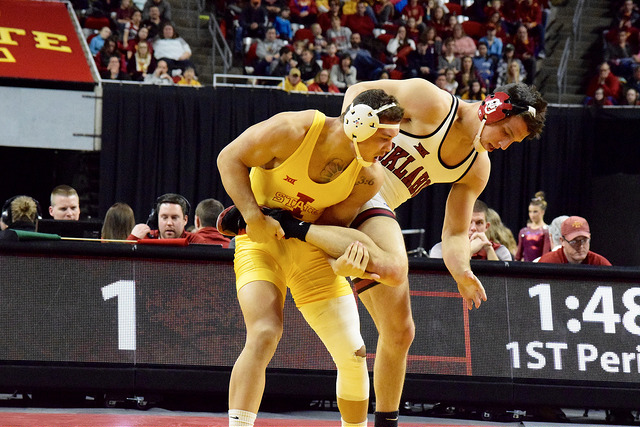 Iowa State follows up a tough 21-16 loss to Drexel with the Lindenwood open saturday. This should help Coach Dresser solidify his lineup moving forward with the Cliff Keen Las Vegas Invite coming up December 1st.

The annual Lindenwood open should provide a tough field, with several Division I teams attending. Missouri (#6), Oklahoma, Southern Illinois Edwardsville and West Virginia all have the open listed on their schedule, suggesting that they will bring all of their wrestlers. Iowa confirmed earlier this week that they will be sending their backups and redshirts. Open tournaments can be a crap shoot in terms of what teams will attend, which wrestlers will wrestle (attached vs. unattached), and what weight and division redshirts will wrestle in. That being said we’ve previously seen backups from Wisconsin, Illinois, Northern Illinois, Ohio and Oklahoma State all present at this open.

There will be multiple weights to watch this weekend, with what looks to be a very competitive field. At 133, there is the potential for Ian Parker to get another test in #9 John Erneste from Missouri. Parker has impressed early, winning the Cyclone Open and defeating Drexel’s best wrestler in Austin Desanto.  Kanen Storr could see a real test in returning All American (4th) and current #4 ranked wrestler Jayden Eierman. With Storr’s variety of leg attacks and Eierman’s wide-open scrambling style, this match has the potential to be an instant classic. 197 is the deepest weight in the field, featuring Southeast Polk alum Willie Miklus. Miklus is currently ranked 3rd, coming off a season  which ended in November due to injury. Also in the field will be #7 Jake Smith from West Virginia, and Iowa true freshman Jacob Warner, the 2017 consensus  #1 195 pound recruit.

We should see the Cyclone squad close to full strength this weekend, with the debuts of Jon Marmelejo (125), Dante Rodriguez (149),  Jarrett Degan (149), and Hank Swalla (174). The list of Cyclones tentatively wrestling are below: