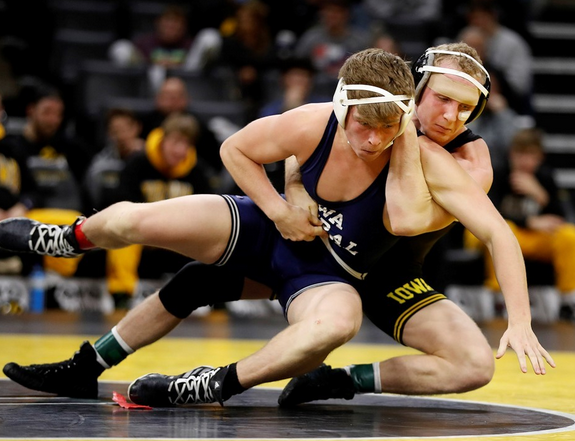 The University of Iowa opened their dual season at with the Iowa City Duals taking on Iowa Central, Buffalo, and North Dakota State. One of the more surprising developments came days before the Duals took place, when the university announced that Kaleb Young, not Alex Marinelli, would be the starter at 165 pounds.

What made that news surprising was despite the fact that most hold both Young and Marinelli in high regrades in terms of their talent and potential, most hold Marinelli to still be a step ahead of Young. So much so that even our own preseason lineup projection had both Young and Gunther moving up to 174 pounds due to Marinelli’s prescience at 165.

But then Friday came and went and Young started all three matches for Iowa, going 3-0 and picking up a win over #20 Andrew Fogarty along the way.

“Kaleb Young is no mystery to us. We see him in the room everyday.” Brands said in his press conference following the Iowa City Duals. “We put him at the weight that Alex Marinelli is going to anchor eventually, but he answered the bell.”

Putting aside the fact the presumed starter had to miss this past weekend’s competition, what was actually more surprising was that less than two weeks prior to the dual Young was making weight and wrestling off at 174 pounds with Gunther. That meant Young needed to make the adjustment back down to the lower weight on relatively short notice.

“I felt pretty good.” Young said on getting his weight down. “I did some good things, I did some things that I didn’t feel great about. I needed to look to score some more and stay on my offense. I don’t know if I was too tentative because it was my first time wrestling here or what, but I need to learn from that because I am capable of scoring a lot more points then I did.”

Young has certainly showed that willingness to open it up, a year ago when he faced Fogarty at the Midlands he won by a score of 12-4, which is much different than the 3-2 match we saw this past weekend. Some of that could have been attributed to the adrenaline of wrestling in Carver for the first time and some of it could have been due to Young being too tentative and worried about making a mistake. Whatever the case his coach is certainly happy about the attitude that Young has displayed filling in for Marinelli.

“The other thing with him is, you’ve got to realize you’ve got to roll and embrace it. And he does that. There is no complaint with him. It’s not like ‘Well what are we going to do when Marinelli is healthy?’ He knows what his role is and that’s what I love most about this entire team. There is just no drama.”

While Brands is happy no drama, and Young stated that he is willing to go where he most needed in the lineup, he also made it clear that he doesn’t want to be in that backup role and that’s something he is working on.

Even though Young is holding himself to a very high standard, Brands was definitely happy with his wrestler’s performance, and judging from his comments, Young’s presence in the lineup doesn’t appear to be going away any time soon.