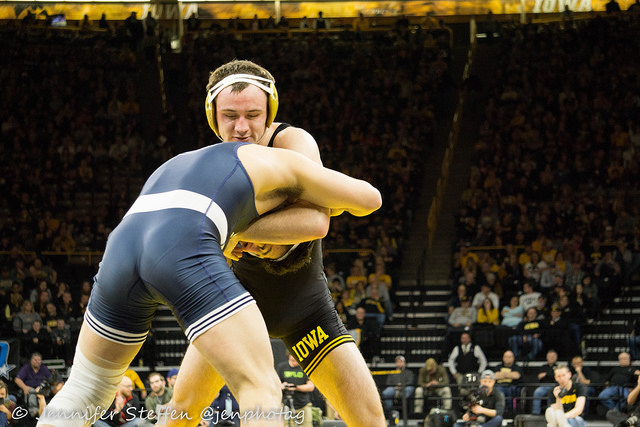 2nd: Stickley starts down and is out, 11-0 lead for Stickley. Radcliffe in on a shot, Stickley sprawls out of it, now comes around for a takedown. He locks up a cradle, but unable to take Radcliffe over. Radcliffe warned for stalling on bottom, Stickley looking for a leg turk to take him over and does. He locks up the TF.

1st: Blast double for Small and he is out to a 2-0 lead, Laux is out fairly quick. Laux now gets in on a single on the edge of the mat, trying to finish, picks it up to his feet and walking Small back on to the mat. Laux trips to take the lead 3-2 with 1:52 to go. Small gets the escape to tie 3-3. Laux snaps the head and trying to come around, now he grabs the leg looking to finish the single, Small able to squeeze out of bounds for no score. Period ends 3-3 tie.

2nd: Small starts down, comes to his feet, Laux returns him out of bounds. Laux working a leg turk to try and turn, but Small doing a good job of keeping his belly to the mat. Now Laux gives up on the leg and working hand control. Small warned for stalling with :50 to go. Laux trying to run an arm bar over with :30 to go. They roll out of bounds. Period ends still tied 3-3, Laux with 2:05 RT.

3rd: Laux starts down. he about gets caught in a cow catcher, Small trying to run it over and just got over aggressive with Laux able to slip out last minute. He escapes, 4-3 lead with 1:48 RT. Duck under Small for a takedown, Laux out quick, still tied 5-5. Small drops into a double, Laux able to counter with double overs, now Laux in on a single trying to finish and does with :03 left.

1st: Double for Turk and he is right into a trap arm turk for 4 NF. Another trap arm turn for 4 NF. Now Turk cuts him, and scores another takedown off a double. 10-1 lead. Turk cuts him again with a minute left. Clarke warned for stalling, snap go behind takedown for Turk, 12-2 lead after the first.

2nd: Turk starts down, trying to work hand control before coming up to his feet, and gets his escape in about :15. Shot by Clarke, and Turk able to go behind for a takedown, Turk cuts him. Turk tries to hit a double near the edge and they go out. Another snap go behind for the takedown. Second ends 17-3.

1st: Snap go behind for the first score of the match for Sorensen. Aldiva gets an escape. Sorensen trying another snap go behind, Aldiva really hanging on the leg, but Sorensen eventual breaks the grip to finish coming around for his second score. Caution start on Aldiva. First ends 4-1 Sorensen.

2nd: Sorensen starts down, and is out :07 and is able to snap can come around for a takedown right away. Aldiva gets out while Sorensen trying to work an arm bar. Sorensen gets a single brings it up to his feet lifts over his head and trips for another takedown. Sorensen cuts with under :30, and Sorensen scores, another Aldiva escape, another takedown by Sorensen. He rides out to lead 13-4.

1st: Double unders for Gunther, and he able to slip behind for a takedown, escape Egli, Single leg finish for Gunther for another. Escape Egli with short time. 4-2 lead, 2:04 RT for Gunther.

2nd: Gunther starts down, comes to his feet couple times Egli doing a good job returning. Gunther is finally out after just over :30. Takedown Gunther, Egli gets an escape, Gunther gets another takedown, cuts Egli on the edge of the mat. Gunther tries to go for a throw, Egli slips out of it, but Gunther still manages the takedown. 11-4 after second.

1st: Both guys trying to lock around the body, Bowman gets lower and finishes a leg attack for a takedown, Vogel gets out, 2-1. Bowman able to come around for another takedown. Vogel warned for stalling with 1:15 to go. Bowman cuts, scores a takedown, cuts Vogel again. Takedown Bowman, he cuts again, scores with :23. Cuts Vogel, Bowman in on a single trying to score and does before period ends, gets 4NF as well. 16-5 lead.

1st: Wilcke works behind for the TD but Sutton is out for the escape. 2-1 Wilcke. Half shot by Wilcke but nothing too deep, Sutton fights it off. A lot of underhooks and pummeling going on. Wilcke defers, Sutton chooses bottom.

2nd: Wilcke trying to dig in an arm bar but Sutton is up in his base. Stalemate. Stalling on Wilcke, little over a minute left in the second. Wilcke still trying to work that 2 on 1 into a bar but cant get it in. The period ends with Wilcke still riding.

3rd: Wilcke chooses down to start the 3rd. 2:03 of RT for Wilcke and he sitll leads 2-1. Wilcke out right away and in on a single. He sucks the leg in and elevates while tripping Sutton to his back for 2 NF. They go OB and Sutton gets worned for stalling. 7-1 Wilcke leading with over 2:30 of RT. Sutton gets to his feet and Wilcke cuts him. Sutton now in on a single but Wilcke has the whizzer. Now Sutton able to cover the far ankle for the TD. Stalling on Sutton for not moving up. Wilcke gets the late reversal to make it 10-4.

1st: Stoll comes out to the song “Why cant we be friends” by War. Lots of heavyweight activities going on such as pushing, leaning, and hand fighting. Stoll gets the TD and works over head lever. This is tight. Stoll gets the fall in 1:49.