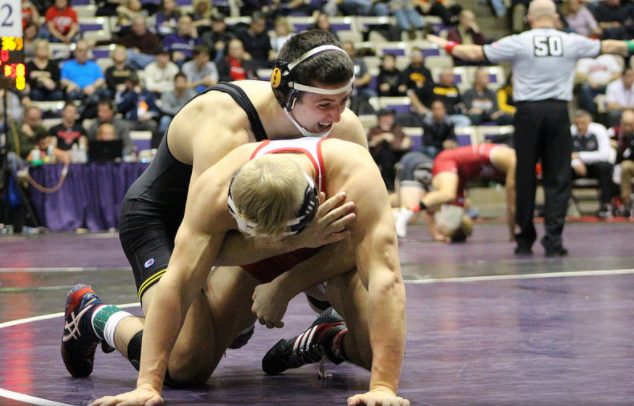 It’s the most wonderful time of the year for Iowa fans, the Hawkeyes season opener. Hawk fans have been anxiously awaiting this moment all off season long. “The thing that’s exciting about college athletics is when there is unknowns” was a statement Iowa head coach Tom Brands made  during his media day press conference, and with five Seniors graduating from Iowa’s lineup, there are a lot of unknowns. Thankfully, we’ll get to see those unknowns in action for the first time against competition outside of the Iowa room and hopefully we’ll get a good gauge of where some of the unknowns are at in the Iowa lineup.

An interesting development with the release of probable starters is that redshirt freshman Alex Marinelli is not listed as a probable starter, but Kaleb Young (who many fans had penciled into 174 in the offseason) will be the guy manning 165 for the IC Duals. It doesn’t look like we’ll be seeing Alex Marinelli make his debut just yet as he must still be recovering from an early season injury. We could be seeing as many as five new faces making their debuts in Iowa singlets with true freshman Justin Stickley, redshirt sophomore Paul Glynn, redshirt sophomore Vince Turk, redshirt sophomore Keegan Shaw, and redshirt freshman Kaleb Young all listed as possible starters by Iowa.

The first of the marquee matchups of the duals will come at 133 pounds against Buffalo’s #7 ranked Bryan Lantry, which will provide a very good early gauge of where the hawks 133 pound starter, whether its Laux or Glynn, is at early on. Of note, Lantry beat Laux 3-2 in a close match at the Midlands this past season. One would think a win there would certainly go a long way towards holding the starting job through Midlands. Cam Sykora of NDSU, who is ranked nationally in the top 20 by some other services, will also prove to be a quality opponent for whoever the Hawks send on the mat.

I think the next weight that has good competition will be at 165, where Kaleb Young will face #19 Andrew Fogarty of NDSU. This is probably the marquee match of the NDSU dual. Young and Fogarty faced off at the Midlands last year with Young winning 12-4 major decision, we’ll see If the match will be closer this time, and maybe Young will break into the 165 rankings while Marinelli is on the mend. Young will also face the #5 ranked JUCO wrestler #5 Brady Vogel.

Kemerer will also face a ranked middleweight opponent from NDSU, in #13 Clayton Ream. Kemerer has defeated Ream handily in the past and has separated himself from most in the weight class, look for the Hawkeye sophomore to maintain that separation here.

Cash Wilcke will face a quality opponent in Joe Ariola who is currently unranked, he was a high school teammate of Sammy Brooks at OPRF. At the 2016 NCAA tournament Ariola upset the #3 seed Vic Avery in the early rounds of the tournament, and has proven to be a tough competitor many times. This would be a quality win for Cash. We should also be able to see how true freshman Justin Stickley performs against two quality Division I starters in Akins and Bianchi, with the possibility of facing the #1 ranked JUCO wrestler at 125, though he did not wrestle in his teams latest dual on November 9th.

We will also get a chance to see redshirt sophomores Vince Turk, Joey Gunther, and Mitch Bowman in their new starter roles. Gunther was a starter last season but he has moved weight classes so I consider that a new role. He will find himself facing the #1 ranked JUCO wrestler at 174, so that could prove to be a good test for Gunther at his new weight class. Bowman has spot started previously for Brooks on a few occasions but he will look to man the 184 spot through the first semester, and will face other solid Division I starters, look for competitive matches here. Turk will be making his first start for the Hawks and said himself that he wants to win and dominate. I’m sure the hawk 141 pounder will want to do just that, which would be a good start in solidifying his role as the guy this year.

The final thing of note is that we get the hear the much-anticipated new walkout song of Sam Stoll! If you follow Hawkeye wrestling then you’ve heard about the Morning Stroll with Sam Stoll. The winner of the joke contest, chosen in a tiebreak by the fans, Pat Lugo had the opportunity to choose Stoll’s walkout song, and we will see if the Imperial March has changed into something else. On a perhaps more important note, is that we get to see a healthy Stoll against outside competition again, hoping for a strong return for Stoll here.