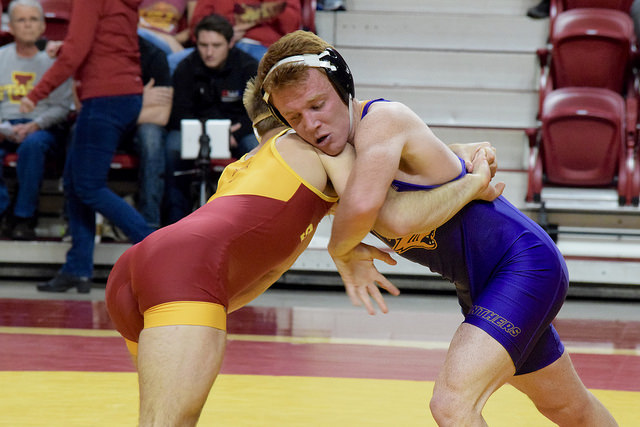 The Northern Iowa Panthers return to action this weekend back in central Iowa where they will be sending a full squad to compete at the Grand View Open. Coming off a performance that saw the Panthers come home with six individual titles, the Panthers will look to build off their early season success before opening their dual schedule at Cornell.

One of the big performers for the Panthers was 125-pound wrestler Jay Schwarm who won a tournament title by defeating #13 ranked Brock Hudkins (Northern Illinois) in the finals (Match Video).

Schwarm is in his first season as a full-time stater after spot-starting for Dylan Peters last year.

It should be noted that the Panthers won six Harold Nichols Open titles despite the fact that their top two returning starters,  Max Thomsen and Drew Foster, were absent. That is of course because the pair were competing at the NWCA All-Star Dual Classic, an event where Thomsen came out on top in. Both wrestlers are scheduled make their regular season debut this weekend.

This weekend might also provide some lineup clarity for UNI, who have a pair of wrestlers competing for the starting spots at 157 and 165 pounds.

At 157 new transfer Logan Ryan is attempting to win the spot from incumbent Paden Moore. Both wrestlers are registered for action this weekend.

With the news coming out that last year’s starter Bryce Steiert will redshirt this season, Isaiah Patton and Dan Kelly will look assert themselves as the starter this weekend as well at 165 pounds.

WATCH THE LINEUP BATTLES GO DOWN LIVE ON IAWRESTLE

UNI is also planning on bringing a full true freshmen squad, including last weekend’s standout Triston Lara. Although projected at 141 pounds, Lara bumped up a weight class and came away with a freshman title last weekend after he defeated Ryan Leisure of Iowa State, 6-5 (Video).