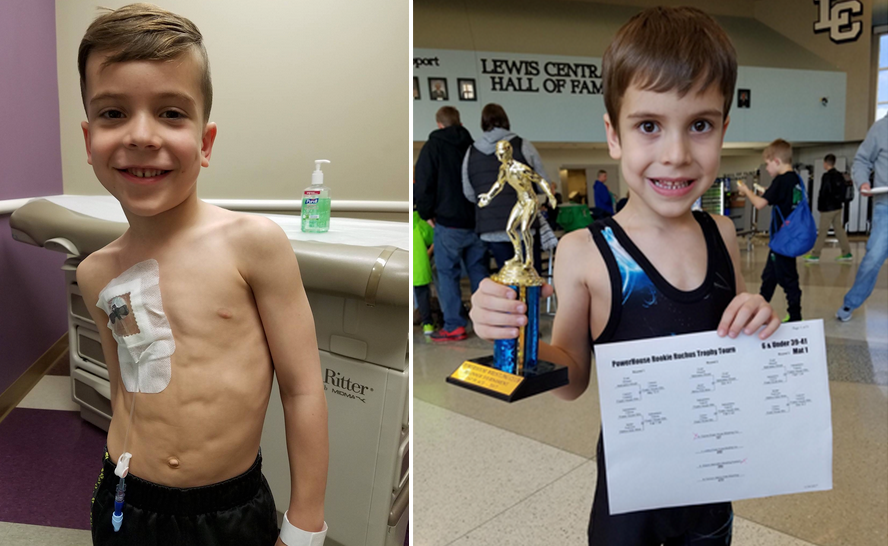 This fight is personal, Sebastiano is wrestling for a cure this season!  Pin Cancer and Smash Leukemia!

In the fall of 2015, Sebastiano was just starting wrestling preseason. He wrestled for Coach Massey leader of the Powerhouse Wrestling Club in Council Bluffs, Iowa. It was his first time wrestling and he was loving every single practice. He was excited to start the real season so he could wrestle in tournaments.

But that never happened for him that year.  He was pulled out of wrestling at the advice of stumped doctors trying to find the cause of his extreme leg pain.  In December 2015, Sebastiano was diagnosed with cancer.  Specifically, B-Cell Acute Lymphoblastic Leukemia, known as ALL.

In January 2016, a little under a month after diagnosis, Sebastiano was rushed to the emergency room. He was unable to move one side of his body or talk to us. While there, the doctors discovered a massive blood clot in his brain. His entire midline and right side were clotted, causing him to have a stroke, then a grand mal seizure.

When he finally awoke from everything, the doctors told us he had brain damage. He was unable to sit unassisted in his hospital bed. He was unable to stand, or walk. Sebastiano’s oncologist had never seen a clot this large in a child’s brain before, and called other specialists for advice.  He was put on blood thinners and anti seizure medicines.

September 7th, 2016. Eight months after the leukemia diagnosis and seven months after the stroke, Sebastiano stepped back onto the mat for his first practice. The blood clot gone. The brain damage healed. The hair starting to grow back. The leukemia in remission, but still taking daily chemo medication.

January 8th, 2017 Sebastiano entered in his first wrestling tournament. His very first match, he was pinned. But he did not quit.  He won the next two matches, taking second in that tournament.

He then won the next two tournaments he entered in. The first being just two days after being under anesthesia for a spinal tap and chemo at Children’s Hospital.

Sebastiano ended his first wrestling season going 18-3. The second two loses came at the state tournament, where he wrestled up in the kindergarten division, and weighed in too heavy after being on steroids the week before. In the off season he practiced freestyle and greco. He entered in one tournament in each, winning both of them.

Sebastiano takes chemo medication in the form of pills every single day at 5:15am. He goes to the hospital and gets chemo injected directly into his blood stream through a port in his chest once a month. He goes under anesthesia every three months to get chemo injected into his spinal fluid to protect his brain. This treatment plan will last until February 2019.

The brace you see on Sebastiano’s shoulder isn’t from a shoulder injury.  It is to protect his port. There is nothing official in the leukemia world to allow our kids to get back to sports while still in treatment. What Sebastiano is wearing is a custom made, one of a kind brace. It has a small plastic cup shaped addition that protects his port, and allows him to continue to wrestle. It is modeled after NCAA champion Iowa Hawkeye Cory Clark’s shoulder brace!

Sebastiano has been working hard in the off season. He joined a track club and ran in a handful of meets against kids three years older than him. He did some gymnastics to work on balance and body awareness. And he never stopped wrestling. After freestyle and greco, he went to camp, he started private lessons, and he worked in the basement doing drills with his wrestling dummy.  He is so excited and ready for the 2017/2018 season!

Please help and donate to his cause. We know we can make a difference in this campaign. We can rally behind Sebastiano, and help him be a leader in this fundraiser!!!

If you are able to be generous and donate, please do.  If you are unable to, please share this fundraiser.  You never know who will see it and be able to donate – maybe even multiple people will donate if you share!

To follow Sebastiano’s journey as he wrestles with leukemia, go to facebook.com/SmashLeukemia or find him on Twitter at @SmashLeukemia