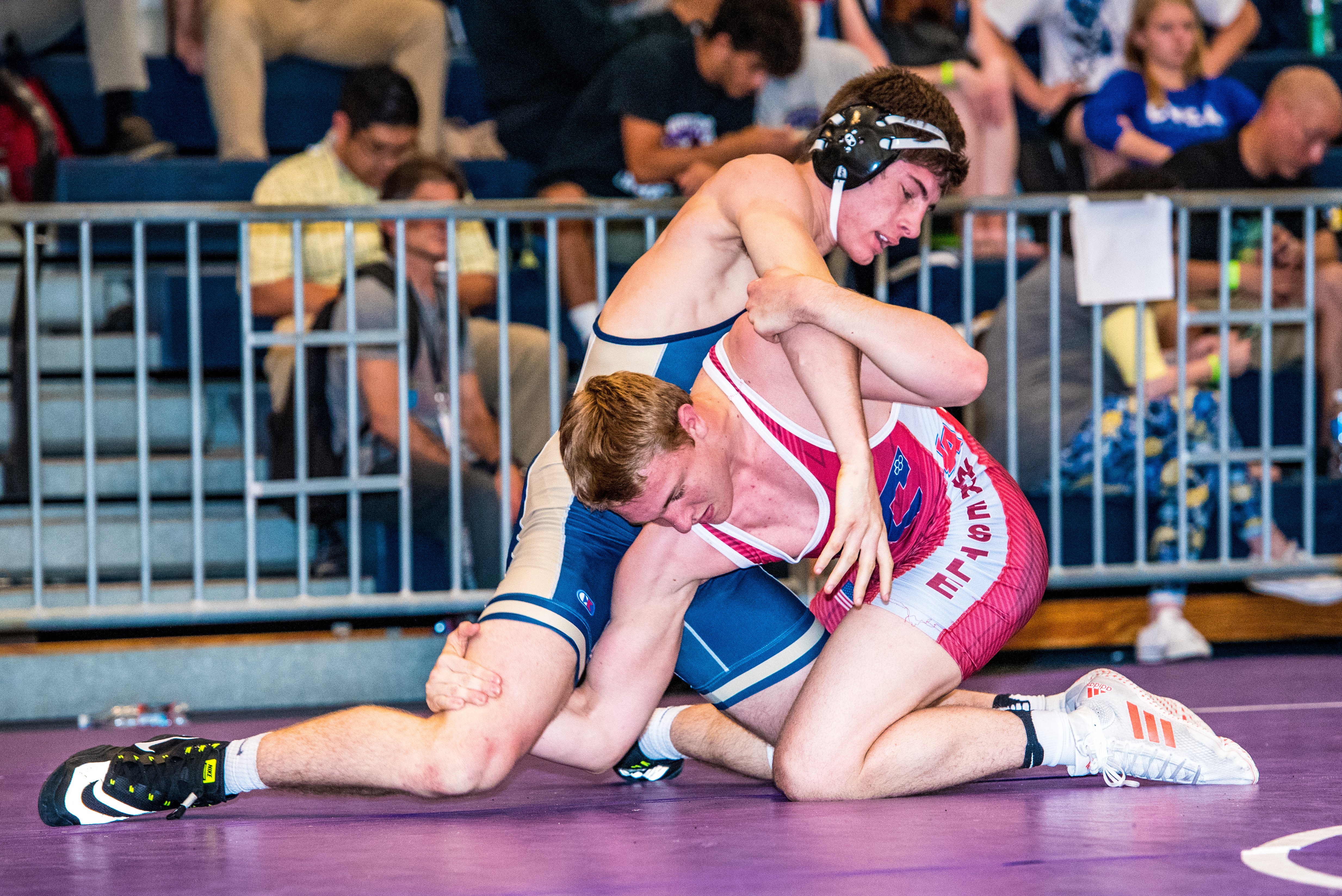 Team Iowa looks to take a strong group out to Fargo this summer returning three Junior All-Americans from the 2016 tournament, and will be adding six Cadet All-Americans from a year ago. While this year’s squad is full of hammers, our own Tony Hager reported that as many as three of the wrestlers from Fort Dodge are expected to miss the national tournament, including returning Cadet runner–up, Brody Teske.

No Cayd Lara or Triston Lara at Fargo. #Fargo17

Iowa first threat for the Triple Crown will be at 100 pounds, where Don Bosco’s Daniel Kimball is coming off freestyle and Greco-Roman state titles after picking up a USA Wrestling Folkstyle national title in April. Putting together a 7-2 record at National Duals along with fellow Iowan Devin Harmison should contend for a podium spot this weekend.

With two guys ranked in the top at 113 pounds Iowa is sitting pretty at this weight. Especially when you consider that Aden Reeves is coming off a National Duals victory over #3 ranked Lucas Byrd. Reeves is coming off back-to-back years of making the podium in the Cadet division and last year he was wrestling up at 120 pounds. Even though defeating the #3 wrestler in the nation was probably one of the biggest moments for Reeves, his freestyle state win over Kyle Biscoglia might have been even bigger in terms of earning confidence. Both Reeves and Biscoglia should push for for the top spot at this weight.

At 120 pounds we will see Fort Dodge prep Drew Bennett will look to try and add Fargo All-American to his resume before heading into his senior year and narrows down and ultimately makes his decision of where he will wrestle in college. Winning both freestyle and Greco state titles, Bennett was also fifth at the Northern Plains Regional.

Over the last few years its tough to find a more consistent wrestler at Fargo than Underwood’s Alex Thomsen, who will be competing alongside a slew of wrestlers at 126 pounds. Coming back-to-back years of earning All-American honors in both styles (in Cadets and Juniors) there is little reason to think that he won’t be a favorite to repeat that type of performance again, though after taking second in Cadets as a sophomore Thomsen is hungry to win a title, and should be in the hunt this year as well. In addition to Thomsen we will also see three state champions, Bryce West (3x), Brock Henderson (2x), and McGwire Midkiff, with Brady Kyner in the mix at this weight as well.

Moving to 132 pounds we will see two-time state champion Michael Millage compete along with state champion Drew West and Gable Fox in what should be another strong weight. West, who has seen most of his Fargo success come in Greco-Roman, will look to close out his career on the podium. Additionally Millage and Fox, both of which rated in the top 25 of IAwrestle’s Fab 50, will both be looking to up their stock with a podium finish prior to the start of their senior seasons.

Led by returning All-American Zach Barnes, 145 pounds should be yet another strong weight for Iowa. Last summer Barnes, who was planning on competing at 138 pounds, missed weight by two-tenths of a pound and had to move up a weight class. In addition to overcoming a weight bump, Barnes also had to rattle off seven wins in a row after dropping his opening round to medal a year ago. Joining him at this weight is Clear Lake’s Ryan Leisure, a former Greco All-American.

Iowa has a pair of names to watch at 152 pounds, both finishing top three at the state tournament during the regular season North English’s Zach Axmear and Wilton’s Trey Brisker. Axmear won a regular season title and followed that up with a state title in May, picking up wins over both Brisker and Fort Dodge’s Cayd Lara. Wrestling in 1A Axmear didn’t run into many of the bigger instate names during his career, but winning 19-8 over Lara is proof he can hang with the bigger class wrestlers. Along with Brisker, these two will head into Fargo under the radar, but poised to potentially make some noise.

Waverly-Shell Rock’s Austin Yant is another under the radar type, which is odd to think considering he won USA Wrestling’s Folkstyle Nationals this past April. Yant has always had a lot of upside and he proved he has gas tank when he went toe-to-toe with Iowa City West’s Nelson Brands at the state tournament earlier this year. A strong tournament would be a fitting ending for a wrestler who came so close to winning a state title these last two seasons.

He didn’t attend Fargo last year, but Cedar Rapids Kennedy’s Ben Sarasin will return to Fargo for the first time since taking fifth as a Cadet in 2015. Taking third at the state tournament, Sarasin’s only loss was to one of the state’s top seniors, Marcus Coleman. This summer Sarasin won the freestyle state tournament, and brought home top six finishes at both the Northern Plains and Western Regional.

Iowa is bring a couple big guns at 182 pounds the first being Max Lyon, who at one point in time was ranked as high as #4 in the nation last summer, and the other being Glenwood’s Anthony Sherry. After winning Folkstyle Nationals in April and then freestyle state in May, Lyon headed east to Purdue for some summer training and has been relatively quiet because of that. He won’t have a shot at the Triple Crown (Lyon did not qualify for Fargo in Greco), but Lyon would have a shot to win two of the three legs next week. Sherry is a two-time Cadet freestyle All-American looking to up his stock before his senior year.

Four All-Americans will compete for Iowa at 195 pounds, led by the top five ranked Joel Shapiro of West Des Moines – Valley. Its been a big summer for Joel, who cruised to a Northern Plains title, a top finish at UWW Cadet Nationals, went undefeated at both Junior and Disney Duals, and recently he committed to Iowa State. Shapiro’s stock has been rising (quickly) and many believe he will end the summer in a big way in Fargo.

Also joining Shapiro as returning All-Americans competing at 195 pounds are Hunter DeJong, Kaleb Reeves, and Logan Schumacher. All three are moving from Cadets into the Junior division, and DeJong and Reeves were both at 195 pounds last summer as well (Schumacher was at 182). DeJong is also coming off a double medal performance for Team USA at the Cadet Pan American Championships this past week.

Making his debut for Team Iowa will be three-time Pennsylvania state medalist Francis Duggan, who will give Iowa a legitimate national title contender after putting in a third place performance at this same weight a year ago.

Finishing up our preview Team Iowa will have three nationally ranked heavyweights competing this weekend, and they will be led by Western Dubuque’s Aaron Costello, who is looking to finish his career on the podium in freestyle after accomplishing that feat in Greco-Roman last summer. Costello was considered a top eight heavyweight in the nation by Flowrestling (before the recent update that removed the class of 2017) and he has proved to be the top heavyweight in Iowa both during the regular season and this summer. Clarion’s Spencer Trenary is coming off a Cadet All-American finish from last summer, and he was also the Greco national champion in that division. Atlantic’s John McConkey has been coming on very strong the last six months, downing Trenary at at the 2A state tournament and freestyle state tournament, and he was also a perfect, 13-0 for Team Iowa Black at Disney Duals.

One thought on “2017 Junior Freestyle Preview”