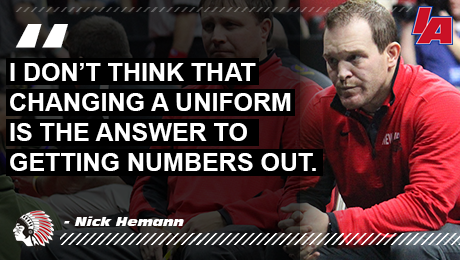 An alternate two-piece uniform consisting of compression shorts or shorts designed for wrestling and a form-fitted compression shirt has been approved for the 2017-18 season in high school wrestling. Wrestlers will have the option of the new two-piece uniform or the traditional one-piece singlet. In addition to the uniform change, the committee approved two changes in Rule 5-11 related to falls and near falls. In 5-11-1, the shoulders or scapula of the offensive wrestler no longer must be inbounds to earn a fall. The committee agreed that wrestling should continue if the offensive wrestler’s supporting parts remain inbounds and no body part of the defensive wrestler goes off the mat. In 5-11-5, “unless any part of the shoulders or both scapulae of the defensive wrestler is inbounds” was eliminated. If wrestling is continuing during a match, near falls and falls will be awarded/earned regardless of the out-of-bounds line.

Full list of rule changes can be found HERE.

Below are reactions from coaches and officials around Iowa.

“I’m personally not a fan of the new rule.  However, if it gets more kids out then I guess that it could be a positive for our sport.  I don’t think that changing a uniform is the answer to getting numbers out.  I think that we need to be creative in our programs, find unique and interesting ways to make our wrestling programs stand out from others creating that family atmosphere that young student athletes want to be a part of.  I really don’t think that changing the uniform is a permanent solution to low numbers in programs nation-wide.” – Nick Hemann, New Hampton

“I think out bounds nearfall rule change is a great thing.  I am favor of the two piece singlets, might get more kids out for wrestling.  The college out of bounds rule should be applied for high school too.” – Casey Conover , Riverside

“Bottom line, if it increases participation, it’s a good thing in my opinion.  The more kids we have in our sport the better.  We have a sport that allows almost every kid who participates the ability to compete!  If a singlet is holding back what could be a potential participant, then this move is a good one. I do think they need to make sure the short is a compression type fit.  Would hate to see a finger caught in shorts and cause an injury.   All that said, maybe it’s time to bring back the robes as well!” – Aaron Tecklenburg, Johnston

“It will not be happening at Cedar Rapids Xavier.  I feel that there will be more fingers getting caught into them and getting injured.  Also believe it will also allow to much down time having to retuck in the shirt in the event it becomes untucked.  Therefore to much of a distraction.  My opinion. – Ryan Chambers, Cedar Rapids Xavier

“The reason for the uniform change is a good one, to increase participation. If this helps get more students out for wrestling, I’m all for it. But the new option still requires a tight fitting uniform,which has been the complaint about singlets. So, we’ll have to wait and see if the change works.As far as the out of bounds near fall rule, we have always followed the college rules, so this is not  a surprise and I think it will keep some of the fleeing the mat from happening because those points will be able to be scored off of the mat now. This could cause problems in smaller gyms where the 5′ safety between mats will probably have to be extended to allow wrestling to continue further outside the circle.” – Todd Kastli, Oelwein

“I don’t necessarily feel that some young wrestlers don’t go out for wrestling because of his/her look in a singlet.  If a young wrestler does not go out because of that reason he apparently doesn’t have the passion for the sport. It is what it is.  I like the two – piece wrestling uniform and may order a set for my wrestlers if they decide to go that way. I don’t know of any Lisbon – City High wrestler that didn’t came out for wrestling because of having to wear a singlet.

Also I don’t like the rule of the offensive wrestler getting a fall when both shoulders of the defensive wrestler are out of bounds.  The fall in bounds is part of the strategy of winning or losing a dual.  If the defensive wrestler is fighting off his back and goes out of bounds – same as always go back to the center and re-start.  I would like to see, however, High School wrestling go to the same criteria as the Collegiate level on scoring on the edge of the mat on their feet.  There are so many missed calls on the edge of the mat that it is ridiculous – I feel this change would eliminate that situation.” – Brad Smith, Lisbon

“I am all for it. The kids always like new and different stuff. Other sports have multiple jerseys, helmets and other gear, why not wrestling.  I think the coverage will be good for the sport.” – Jay Groth, Ankeny Centennial

“I really like the out-of-bounds rule change. There will be times it will be tough to watch the shoulders and inbounds criteria, but the overall benefit for the offensive wrestler to score out weighs those few instances where that might occur. I also really like the new optional uniform change.  There has been a great deal of discussion involving those potential wrestlers that don’t participate due to issues with body image.  This helps with that. How many times have you seen a wrestler with a shirt under his uniform without medical reason?  I know the rule didn’t allow for an undergarment without medical reason but the reality for some it hindered their them psychologically and socially. I am glad they allow this option.” – Lanny Brand, Official

“I don’t know that I am in favor of the 2 piece uniform. I would have to see what is being considered. Without alot of thought, I think that I would be alright with nearfall out of bounds if the offensive wrestler is inbounds.” – Mike Braden, Official

“I think the near fall rules/points are a great thing. Keeps the wrestlers wrestling all the time. Great for fans as well, I just hope we can get some agreement and consistency with the officials. We all need to be on the same page when it comes to scoring and officiating. As a coach, most times when I have question for an official, I just want clarification so I can better coach and inform my wrestlers for the future, but some officials seemed take being questioned as if I’m insulting them. If we can talk with them about the rules and how each side sees thing, then we’ll always have issues. It doesn’t look good on either part if we can’t communicate.
I also don’t feel that the attire change will do much except eliminate the excuse of the singlet as a reason they didn’t come out. I truly believe it’s the work and the fact that they are on their own that keeps kids away. There is nothing easy about wrestling and that is what also makes it so great. And a change in uniform will not make it easier.”  – Brandon Heying, Belle Plaine

“I’m still on the fence. I can see the edge “being played” yet, a coach can argue the ruling.  Im surprised the uniform change was allowed. I come from a small town and most kids can’t afford a singlet rental. So,the rule change by myself was welcomed.” – Josh Hamilton  Afton,IA

“The new two-piece uniform should help the sport with numbers. I am not sure if you will see a lot of wrestlers that have been involved since grade school choosing the two piece over the singlet, but having the option can only help increase numbers. More skin is also covered so it should reduce the spread of communicable skin infections. Will a compression shirt create more friction and grip? Will there be more uniform malfunctions that could slow down the match? (i.e. broken drawstrings and ripped shirts.) Increased injuries like broken fingers from getting caught up in the shorts. This one seems less likely with the material that “fight shorts” are made of, but the new rule does not talk about the material – only inseam and above the knee.
I love this rule. As long as a wrestler has his supporting points in-bounds, why shouldn’t he get points for exposing the opponents back? It is no different than getting a takedown or escape on the edge of the mat.  Some mats in small gyms will make this a tough one to call, but if there is enough real estate… I say we use it.” – Ben Strandberg, Sibley-Ocheyedan

“I believe the uniform option is a good thing if it will help increase our numbers. I hope that it remains optional and that singlets will still be able to be used. I like the new out of bounds nearfall/fall rule because it will eliminate fleeing the mat while a wrestler is getting pinned. It puts more of an emphasis on fighting off your back and/or not getting turned in the first place.” – Gene Hildreth, Ankeny Centennial

“The out of bounds near fall/fall rule change is one of the most proactive rule changes we have seen in a long time!  The rules committee did a great job with this change!” – Shawn Angell, Official