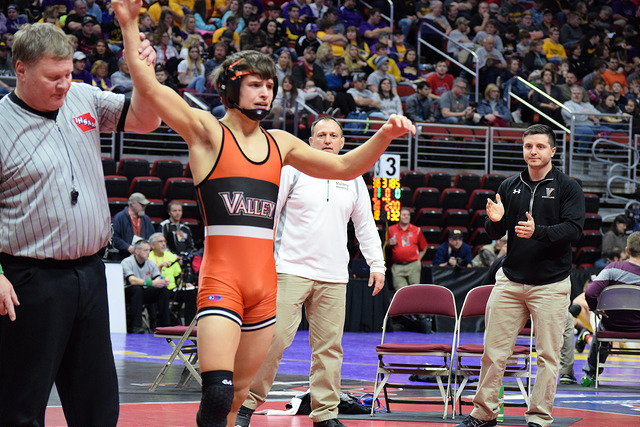 Two-time Iowa High School state qualifier Noah Hughes-Reilly has committed to wrestle for Loras College. The Valley High School senior reached the 3A 120 pounds semi-finals where he would face two-time state champion, Brody Teske. Hughes-Reilly would go on to lose his match against the eventual champ and then came back for a fifth place finish.

Simpson and Luther were also in the mix for the state place-winner but Noah wasn’t planning on wrestling in college until the state championships. After finishing fifth he was able to visit the campuses and fell in love with Loras.

“The coaches and wrestlers that I met were great to me. I like the location not too far but not too close. And campus is pretty great!”

Loras College will look for Hughes-Reilly to compete at 125 pounds in college and in order to compete at the next level he knows he has work to do.

“I need to work on my feet a lot more. There is always room for improvement.”

Former Wartburg standout TJ Miller, took the helm of Loras College for the first time this past season and lead the Duhawks to a second place finish in the IIAC up four spots from just a year ago. The Duhawks rattled off 10 straight dual victories, which included three over top-15 programs.

Miller was named the NWCA Rookie Coach of the Year after guiding the Duhawks to a sixth place finish at the 2017 NCAA Division III Wrestling Championships, highlighted by three All-Americans for the first time since 2002.

Excited to announce my commitment to continue my academic and wrestling career at Loras College. #GoDuhawks pic.twitter.com/8zHQidqrBR