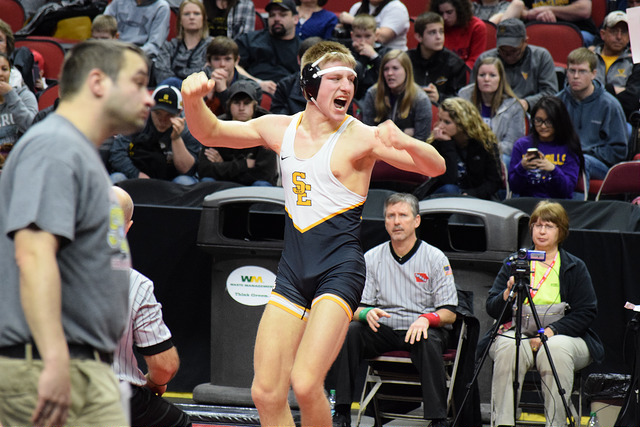 Southeast Polk’s Gavin Babcock will be staying local, as the 170-pound 3A runner-up has committed to wrestle for Central College. After a 1-2 record at the state tournament as a junior, Babcock made a big jump rising to #3 in IAwrestle’s final 3A rankings. His senior state tournament run saw him defeat three ranked wrestlers before falling to eventual three-time state champion Marcus Coleman of Ames in the finals.

“Central was at the top of my list almost the entire time.” Babcock said of his commitment, “There was a period of time where I had no idea what I was going to do, but it found it’s way back to the top. It was the most comfortable place overall and I felt like I clicked with the guys really good. Their program continues to get better, and (Coach Eric) Van Kley has been there for me and talked to me for close to a year.”

Babcock committing to Central almost never happened, and not just because he was also being pursued by Wartburg and Iowa State. In actuality Babcock almost didn’t even go out for the sport while at Southeast Polk.

“I never thought I would wrestle in college, given I almost didn’t go out for wrestling in high school, until this year. I realized I had just gotten good and there was a lot more to come.”

Babcock continued his successful year into the postseason where he earned All-American honors, placing seventh at 182 pounds at USA Wrestling’s Folkstyle Nationals. He will look to join a Central squad that sent five wrestlers to the NCAA tournament, with two of Dutch wrestlers earning All-American status. He projects at 184 pounds to begin his career, and could grow into 197 pounds.