A Full Offseason on Tap for Valley’s Joel Shapiro 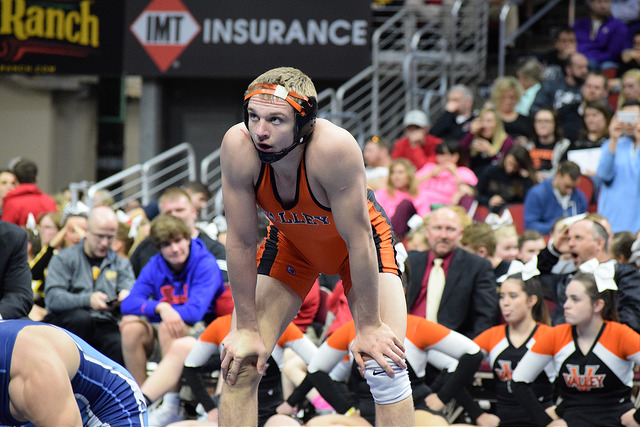 Over the last year and a half there aren’t many wrestlers in Iowa that have seen their stock spike like Valley wrestler Joel Shapiro’s has. After winning five straight matches to take third as a sophomore at 145 pounds, Shapiro added some size and went on a tear during the summer, upsetting top 10 ranked Nate Stefanik of Pennsylvania, taking top finishes in both styles at the Northern Plains Regional, and earned All-American honors at USA Wrestling’s Freestyle Nationals. Joel started his junior season with a preseason Night of Conflict victory over Illinois standout Danny Braunagel, which would kick off an undefeated state champion season for the Valley Tiger.

“Freshman and sophomore years, starting at 126 and jumping two weight classes to 145 put me in a weight class dominated by juniors and seniors which definitely added a challenge for me. I was still growing a lot,” Shapiro told IAwrestle about finally reaching the top spot, “To finally win state was a goal I’ve had since I started wrestling at five years old, so it felt awesome to finally reach that goal. Now to move on to the next goal, and the next after that.”

Shapiro capped off his season by defeating Lewis Central’s Mac Southard in the finals, 5-3. which was his 46th consecutive win on the year and a perfect season.

“I’m not completely sure I was the first ever,” Shapiro said when asked if he was the first Valley wrestler to ever finish a season undefeated, “But for sure I was the first that Coach Young has had in the 20 years he’s been here. My picture was taken last week for the ‘Hall of Champions’ at Valley and I do feel a lot of pride in having accomplished that.”

The road to Shapiro’s wasn’t without hardship, with the junior sustaining a hand injury after a 5-1 win over Linn-Mar’s Alex Streicher in the quarterfinals. With his goal just within reach, Shapiro opted to deal with the injury after the tournament.

“I actually went directly to the ER Saturday night and had my hand X-rayed. I hurt my hand in the quarters and thought it was broken, but decided I had to just deal with it until after the tournament. No broken bones, just damaged a ligament and have had my hand in a splint since then and just started live wrestling this week.”

Having missed being able to celebrate the night of his title, Shapiro knew exactly what he wanted his “first meal” to be after a season of cutting weight.

“The morning after the finals, I went to Pancheros and had a burrito.”

While the regular season is over, Shapiro is still hard at work getting bigger, stronger, and better for the next season. He expects to have a full offseason of training.

“It’s going to be packed with weightlifting, camps, tournaments, and training with open mats that Dion Cobb makes available and at Pablo Ubasa’s club.

As a product off all of the success that Shapiro has had in the last 12-18 months he has already started to receive interest from multiple Division I teams.

“It’s early in the process, but so far I am very grateful for the opportunities that are being extended to me for visits and communication. Official visits can’t happen until next school year and I’m keeping all options open until I’ve had my official visits. I’ve gone to a couple of unofficial visits to campuses to see how my educational goals can be met as well as talking to the coaches. I was invited to home duals at South Dakota State, UNI, and Iowa. I’m checking out a few more campuses next month including North Carolina, Campbell, and the Air Force Academy. I’ve also had conversations with coaches at Purdue, Northern Illinois, and Maryland. I do have one home visit already scheduled with a coach for July first.”

No matter what the future holds for Joel, he is still focusing on the present, and is eagerly awaiting a shot to win his second state title.

“I’m looking forward to my senior year and finishing with another state title.”