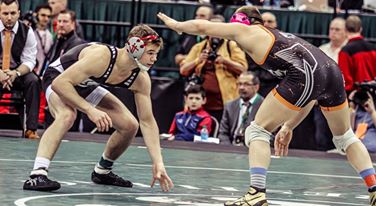 Fresh off winning his second state title in Ohio, St. Paris Graham junior Rocky Jordan named the Iowa Hawkeyes as one of the top schools he has interest in during a recent interview with Zebulin Miller. Jordan is one of the nation’s top ranked wrestlers in the class of 2018 coming in at #38 by Flowrestling. Jordan is also currently ranked #14 at 152 pounds by Flo.

The Jordan family has a deep tradition in the sport of wrestling, with Rocky’s father, Jeff, and uncle, Jim, both earning All-American honors at the University of Wisconsin, as did his cousins Ben and Isaac Jordan. His brothers Micah and Bo are currently All-American wrestlers for Ohio State, with the pair taking fourth and second respectively.

Despite the family connections to Wisconsin and Ohio State, Rocky lists Iowa as his only other school he is talking to in addition to the Buckeyes. He mentions Iowa assistant Ryan Morningstar as one of the reasons for his interest in the Hawkeyes.

Obviously pulling the Ohio native out of the Buckeyes would be a tall task for Iowa, but it wouldn’t be the first time Hawkeyes swooped a recruit out of Buckeye country. Iowa currently has former St. Paris Graham wrestler Alex Marinelli on the roster and fellow 2016 graduate Justin Stickely is expected to join him on the team next season after establishing residency during the 2016-17 season.