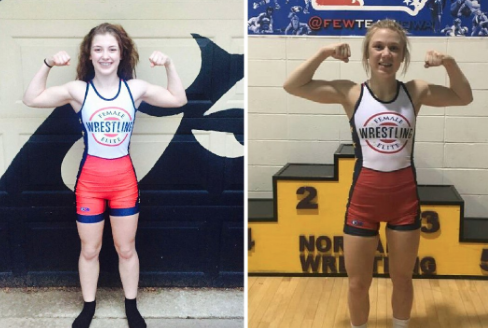 As the conference championships were in full swing at the college level, so too was the Female Elite Wrestling Championships Sunday morning in Norwalk. 108 wrestlers from five states took to the mats in the 3rd annual event.

The High School Champions were:

Highlights from the competition:

At 108 pounds, two-time Upper Iowa Champion and 1A district qualifier, Felicity Taylor won the championship while 2A district qualifier, Alaina Sunlin of Monticello took runner-up. These two athletes have proven to be among the best female wrestlers in the state this past season.

Freshman Tateum Park took the 115 pound championship, while at 122 pounds, “Night of Conflict” wrestler Alanah Vetterick of Norwalk (High Altitude Wrestling Club) was back in action to take the title.

Des Moines-Lincoln has shown their support of girls wrestling and currently fields a team with five female participants. That paid off this weekend with a 130 championship for Jolynn Harris.

Kingsley-Pierson’s Keagan King showed that she is among the top in the state this weekend by taking the 140 pound division. King has wrestled on the varsity team the past couple seasons and has shown tremendous growth.

Ciana Sonberg of Charles City is currently a USA Wrestling 70 kg, Cadet National Team Member and showed that her title is well-deserved by pinning her way to the 155 pound championship.

Another Des Moines wrestler, Amela Huskic pinned her way to the championship at 191 pounds for Roosevelt High School while Kali Zufall of Estherville took the 191+ uncontested bracket.

That’s what you can expect to see as Felicty Taylor and Tateum Park meet each other in a 1A vs. 3A battle taking place at the “War at West Gym” all-star event next weekend. Be sure and come out to show your support for these great wrestlers!