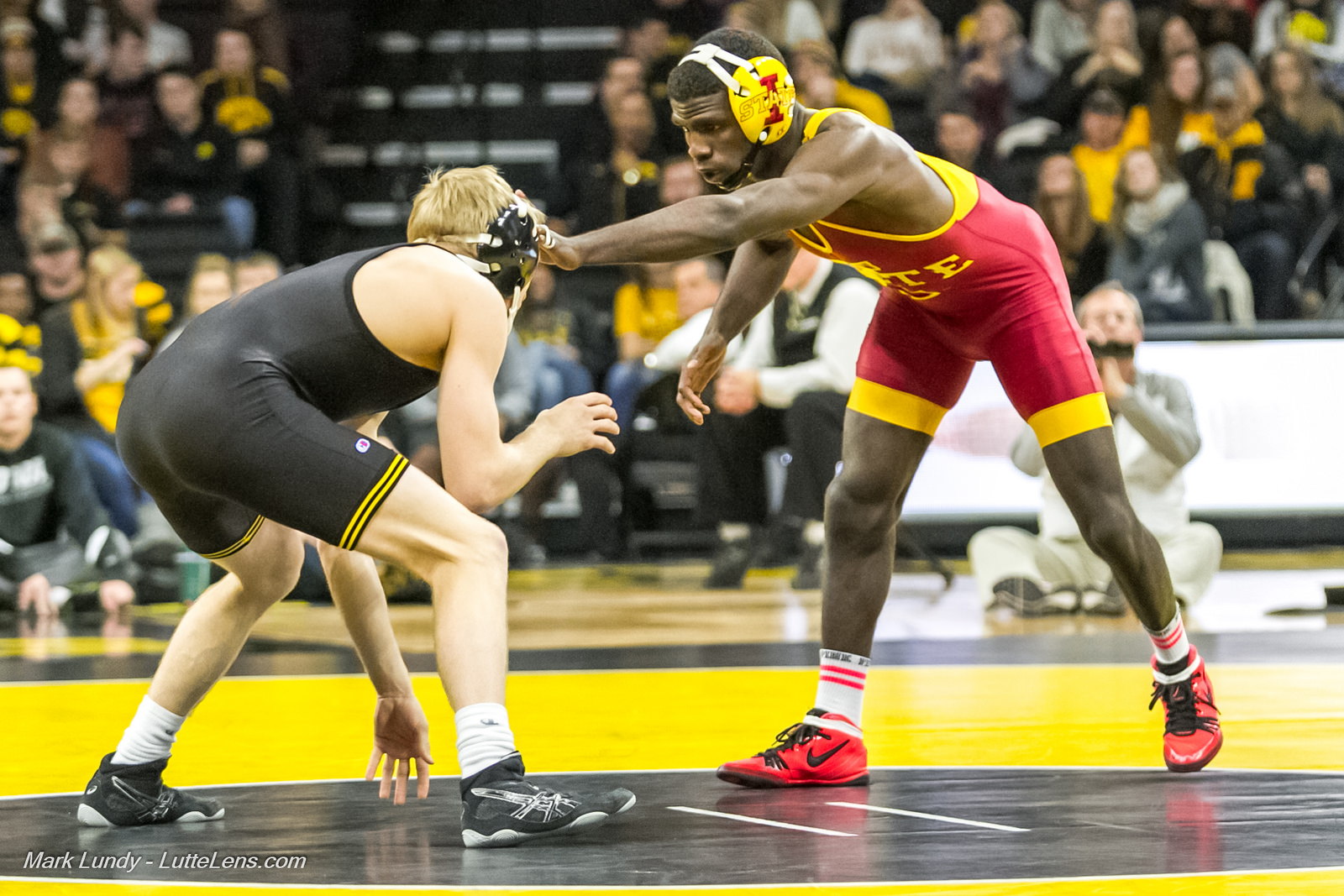 It’s been the story all season, but Iowa State comes into this weekend’s conference championships in a tough spot, as only two Cyclone wrestlers are in a position to earn automatic berths to the NCAA championships held in St. Louis later this month. While both of their returning All-Americans should be locks to advance this postseason, eight other wrestlers will look to pull an upset to keep their seasons’ alive. Senior duo Kyle Larson and Quean Smith each sit just one spot back of an autoberth going off this week’s pre-seeds.

Listen to Lars and Ross give their thoughts on the Big 12 tournament on the latest edition of the Potentially Dangerous podcast:

After qualifying for the national tournament as a junior, Kyle Larson has some work in front of him to punch his second ticket to the NCAA tournament. Larson began the year as the Cyclones starter at 125 pounds, but then lost his job to freshman Markus Simmons in November. The weight cut proved to be too much for Simmons, which thrust Larson back into the lineup full-time.

There is no denying that NDSU’s Josh Rodriguez and Oklahoma State’s Nick Piccininni make for a rock solid top two at this weight. The next tier consists of Oklahoma’s Christian Moody and Wyoming’s Drew Templeman with Northern Colorado’s Trey Andrews and Larson slotted in the next group behind them. With it fairly clear that Rodriguez and Piccininni are comfortable favorites that will likely leaves four guys fighting for the last two spots which puts Larson’s odds in a hole.

Of all the Cyclone wrestlers Earl Hall is one of two wrestlers that enter the conference tournament that look in a comfortable position to qualify for the NCAA tournament. A two-time All-American, Hall will be looking to become a three-time conference finalist for Iowa State this weekend.

Sitting ahead of Hall in the seeding is Oklahoma State’s Kaid Brock and SDSU’s Seth Gross, who are both ranked in the top five nationally at this weight. Hall dropped a 7-4 decision to Brock in their dual meeting and lost 13-1 to Gross at the Midlands. Hall had a couple close calls with conference opponents throughout the season, which includes his 4-0 win against Oklahoma’s Trae Blackwell and his 9-7 win over Northern Colorado’s Richard Montoya at the Cliff Keen Invite. His chances of qualifying for the national tournament remain rock solid, but the Cyclone senior could be tested this weekend.

Hoping for third time is the charm, John Meeks will look to earn his first ever national berth in his senior season for the Cyclones. After graduating high school as one of Iowa’s more storied four-time state champions, Meeks has struggled to recapture the success that made him a top five recruit in high school. This weight for the Big 12 is also one of the toughest, as it boasts both 2016 NCAA finalists.

Oklahoma State’s Dean Heil ruled the roost in the conference with Bryce Meredith of Wyoming being the clear second. Oklahoma’s Michael Longo’s only conference losses were to the top two, which makes the fourth and final conference bid the only one that looks truly up for grabs. Wyoming’s Timmy Box will enter the tournament as the #4 seed, but he’s been far from perfect this season. Meeks sits one spot back in pre-seeds for the last automatic qualifying spot, which means he will need to be perfect this weekend.

Iowa State’s fourth consecutive senior in the lineup, Gabe Moreno will need to steal an automatic bid in order to qualify for this third NCAA tournament. Moreno started the season down at 141 pounds and then later made the decision to move back to 149 pounds where he has seen most of his success as a Cyclone.

This is a tough weight with Oklahoma State’s Anthony Collica well established at the top and Oklahoma’s Davion Jefferies and SDSU’s Alex Kocer as the next two. Wyoming’s Cole Mendenhall has put together a solid season with his worst loss likely his 6-5 loss to American’s Michael Sprague. Still if we see the Gabe Moreno of old his chances of taking top four and qualifying for St. Louis is among the best of his teammates.

With only three bids available at this weight, redshirt freshman Colston DiBlasi is going to need some help to continue wrestling past this weekend. One of the funkiest wrestlers in the nation, DiBlasi is actually tied for second in the country with 15 pins, with Cornell’s Gabe Dean the only wrestler ahead of him.

With that in mind Oklahoma State’s returning All-American Joe Smith will be the top guy in this class, and Clay Ream of NDSU has put together a strong season to earn the other top pre-seed. After starting the year at 165 pounds, Clark has established himself as the third guy in the conference and will have All-American potential in St. Louis.

This is another weight where the Cyclones began the season with one starter, but will end the season with another. After the weight cut to 165 pounds proved too be too much for Dane Pestano (who was a NCAA qualifier at 184 pounds last year) Logan Breitenbach took over going 4-9 on the year. Potentially better suited to challenge for the 157 pound spot in the lineup, Breitenbach enters this weekend’s contest looking to make up a lot of ground to qualify for the NCAAs.

Of the top Big 12 wrestlers Breitenbach faced this season he surrendered bonus points, which makes for a hard argument that he has the potential to flip the script from the regular season meeting.

If Earl Hall has the best chances of qualifying for the NCAA tournament, Lelund Weatherspoon is a close second, as he will enter the Big 12 tournament as the #3 seed behind SDSU’s David Kocer and Oklahoma State’s Kyle Crutchmer. A surprise All-American in 2016, Weatherspoon has struggled with the consistency, as evidence by his regular season finale where he lost a 10-4 decision to Minnesota’s Chris Pfarr.

Still when it comes to the postseason it’s always difficult to count Weatherspoon out, with his 2016 run being kicked off by upsetting Oklahoma State’s Chandler Rodgers to claim his second conference title. The talent in the Big 12 takes a bit of a drop off after Weatherspoon, with Oklahoma’s Matt Reed and Utah Valley’s Kimball Bastian potential dark horses to steal the final automatic berth.

On a positive note Iowa State’s Carson Powell has a shot at taking top four at this weight, the downside to that is only two wrestlers earned NCAA bids at this weight which will really put a damper on Powell’s postseason chances. Former 197-pound All-American Pat Downey likely would have had a chance giving Iowa State another chance at a national qualifier, but he was removed from the team last weekend for violating team rules.

Nolan Boyd of Oklahoma State is the top wrestler at the weight followed by Northern Colorado’s Dylan Gabel and SDSU’s Martin Mueller. In Powell’s meeting in the regular season with the top trio of this weight he was 0-3, losing two of those matches by major decision. Still the former Ankeny state medalist will close out his Cyclone career with his first ever trip to the postseason.

After missing the beginning of the season due to injury, Marcus Harrington will make his first trip to the postseason for the Cyclones and will be in a position to qualify for the NCAA tournament with the Big 12 receiving five automatic berths to St. Louis.

West Virginia’s Jake Smith has the top spot in the conference with SDSU’s Nate Rotert a clear second if he is indeed healthy. Rotert has been a top guy for the Jackrabbits this season, but he suffered an injury in his match against Smith which caused him to default out. Oklahoma State’s Preston Weigel is a solid third in the conference. In Harrington’s regular season dual meeting with Oklahoma’s Brad Johnson, who enters the tournament slotted to finish with the final automatic berth, handled Harrington with ease which means in order to keep his season alive he will either need to root for an upset, or fight like mad for the last spot. Former Iowa prep Cordell Eaton of NDSU will look to contend with Harrington as well.

The last remaining spots the Cyclones will have an opportunity to steal an automatic NCAA bid will come at heavyweight, where senior Quean Smith just needs to wrestle one spot about pre-seed to qualify for the national tournament.

Smith missed the start of the season so he missed his head-to-head opportunity with NDSU’s Ben Tynan, but he did pin #3 pre-seed Dustin Dennison of Utah Valley at the Cliff Keen Invite back in December. Oklahoma State’s Austin Shafer and Oklahoma’s Ross Larson (Iowa native) are the top two competitors in this weight-class, but Smith could make a run to a top three finish this weekend.