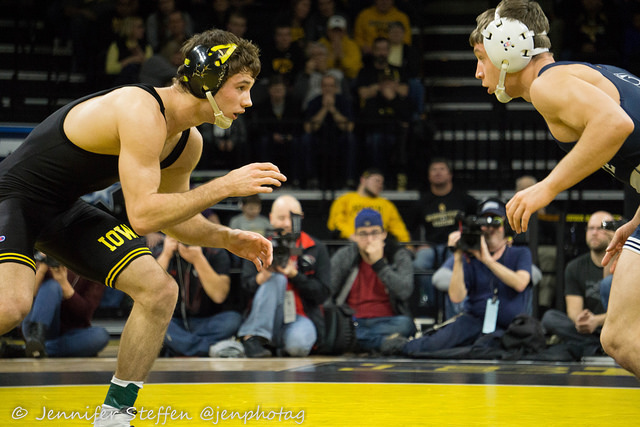 The Big Ten Championships are finally here, and with that the Iowa Hawkeyes will head to Bloomington, Indiana looking to advance their wrestlers to the NCAA Championships in St. Louis later this month. Iowa earned just one top pre-seed, with that being undefeated Thomas Gilman at 125 pounds. The Hawkeyes earned second seeds at 149, 157, 184 pounds, and have a total of nine wrestlers seeded. Looking just at pre-seeds compared with the NCAA conference allocations that were released last week, the Hawkeyes stand to qualify nine wrestlers to the national tournament.

Listen to Lars and Ross give their thoughts on the Big Ten tournament on the latest edition of the Potentially Dangerous podcast:

It’s now or never for Iowa senior Thomas Gilman, who is looking to come away with his first ever Big Ten title this weekend in Bloomington after finishing second as a sophomore and third last year in Iowa City. He will be carrying his undefeated season record into this weekend’s contest, but while his record remains unblemished, there have been several wrestlers that have tested Gilman to this point.

The biggest threat may be Penn State true freshman Nick Suriano, who held Gilman to a two point victory in their only meeting earlier on the year. Gilman owns the series against Nebraska’s Tim Lambert and Minnesota’s Ethan Lizak, but last time out both wrestlers managed to rack up riding time against the Hawkeye, which is a new development. This weekend will play a role in determining Gilman’s legacy at Iowa and more importantly will have a big impact on his seed for NCAAs in St. Louis.

It hasn’t been the season we expected from three-time All-American Cory Clark as a shoulder injury has slowed the reigning Big Ten champion. After finishing on top of this weight-class in the Big Ten a year ago, Clark will have some major work cut out for him in order to retain his spot.

The Big Ten has insane depth at 133 pounds with Ohio State’s Nathan Tomasello enjoying a lot of success since he made the move to the weight this season. In addition to Tomasello, the Big Ten returns All-Americans in Nebraska’s Eric Montoya and Illinois’ Zane Richards, while newcomer Stevan Micic of Michigan has been rock solid to begin his career as well. This season we saw Clark narrowly defeat Micic, lose uncharacteristically to Montoya, and history shows that the Clark-Richards battles are always razor thin. After making two straight national finals at this weight it’s clear that Clark has the talent to win the weight this weekend, but that all hinges on how his shoulder is feeling.

We came into this season expecting two wrestlers to battle for this spot in the Iowa lineup, but in the end Carton not only broke through in the room, but he also found his footing against nationally ranked opponents. Carton was 6-3 in Big Ten Duals and in all three of his losses Carton was in a position to win that match. He lost leads in back-to-back matches against Penn State’s Jimmy Gulibon and Ohio State’s Luke Pletcher, and was a takedown away from stealing a match from Minnesota’s Tommy Thorn.

Fortunately for Carton, the Big Ten really only has Rutgers’ Anthony Ashnault as the clear leader at this weight, but realistically the next six guys (Thorn, Gulibon Carton, Pletcher, Michigan State’s Javier Gasca, and Nebraska’s Colton McCrystal) are all fairly even with each other opening the door for the outcome to be drastically different from the seeds coming into the tournament. A year ago Gulibon shocked everyone by coming from the eight seed to reach the conference finals, which goes to say if Carton hits a hot streak at the right moment he can set himself up handsomely down the road at nationals.

After losing only two matches a year ago, one in the Big Ten finals the other in the NCAA finals, it’s been a bit of an odd season for Sorensen who looked like he had established himself as the clear number two at this weight nationally behind Penn State’s Zain Retherford. In fact if you had told fans in the preseason that Sorensen would close the gap on Retherford and take him down twice in their dual meeting expectations would have gone through the roof for the junior.

While the possibility of winning a Big Ten and NCAA title remain on the table for Sorensen, there are a few aspects of his game that will need to be cleaned up to give him the maximum opportunity to succeed. Using his two takedowns against Retherford as evidence, it’s clear that Sorensen’s offense is elite. Prior to their dual meeting it had been a long while since anyone had managed to take Retherford down and Ohio State’s Micah Jordan proved it wasn’t a fluke by taking Retherford down himself a few weeks later (though Retherford managed to win by technical fall in that match). Sorensen’s other losses were to out of conference opponents and both came in overtime.

It’s clear that the aforementioned trio of Retherford, Sorensen, and Jordan stand apart from the field at this weight, which means Sorensen will likely have a battle just to reach Rehterford in the finals.

While Nolf remains in a class by himself at this weight, Kemerer falls into the second tier with Nebraska’s Tyler Berger, who should be on the same side of the bracket as Kemerer. Michigan’s Brian Murphy also tested Kemerer in their only meeting this season, but if pre-seeds hold Kemerer would only face Murphy if he is able to upset Berger in the quarterfinals.

Outside of his meeting with Nolf, Kemerer’s scrambling ability has been a big factor in his success over his competition, which is a testament to Kemerer’s progression from his true freshman season. No one has ever doubted Kemerer’s offensive potential from his feet, but combined with that scrambling ability is the reason he has risen to the elite of this weight-class so quickly.

While all the talk about the possibility of Brands pulling true freshman Alex Marinelli’s redshirt was going on, redshirt freshman Joey Gunther was quietly putting together a solid season that saw him go 6-3 in Big Ten duals with all three of his conference losses coming to opponents ranked in the top five nationally.

This is another weight that features several of the nation’s top wrestlers, most notably Illinois’ two-time NCAA champion Isiah Martinez, and returning NCAA finalist Isaac Jordan of Wisconsin. Michigan freshman Logan Massa has established himself as potentially Martinez’s biggest threat in winning his third conference and NCAA title this season, and Penn State’s Vincenzo Joseph is right there with them.

To Gunther’s credit he was right there with Joseph, losing 7-4 in the dual, and took Jordan to sudden victory in their meeting. He scored big wins against Minnesota’s Nick Wanzek and Michigan State true freshman Drew Hughes, and avenged a Midlands loss to Nebraska’s Dustin Williams just a few weeks ago.

The biggest thing for Gunther has been his steady progression, which is why he currently sits in a position to qualify for the NCAA tournament. While there is no doubt Gunther has gotten better from the start of the year, his experience and consistency will be tested at the Big Ten tournament. Gunther has wrestled a close match with just about everyone he’s stepped out on the mat with this year, and he will need to avoid getting burned by late period mistakes for his season to continue.

After taking fifth a year ago at this weight, senior Alex Meyer enters the Big Ten Championships with the opportunity to finish his career as conference champion at a weight full of solid, but potentially no elite, wrestlers.

That wasn’t always the case, as Ohio State’s Bo Jordan looked to be a lock as one of the top wrestlers in the conference and the nation, but injuries have force the Buckeye to miss significant mat time, and his meeting with Meyer was only a narrow 3-2 victory. The next best wrestler at this weight may be Penn State’s Mark Hall, who Meyer defeated 7-4 earlier in the year. The rest of the field includes 2016 Big Ten runner-up Zac Brunson of Illinois and Michigan freshman Myles Amine.

Consistency will be the key for Meyer who could use a high Big Ten finish as a springboard to a top eight seed at nationals. His resume includes losses to Jordan, Brunson, and Amine, but Meyer has knocked off several of the top wrestlers in the country throughout his career, which proves he has the talent to go with just about anyone in the country.

Nationally, the 184-pound weight-class looks to be potentially the toughest on paper and a large reason for that is due to the Big Ten featuring boasting as many as five wrestlers ranked in the top 10, including both of last year’s 174-pound NCAA finalists.

There isn’t much argument that Penn State’s Bo Nickal is deserving of the top spot in the conference, but after that it opens up for debate as to who is the next best wrestler. Iowa senior Sammy Brooks is the returning Big Ten Champion and owns wins over Ohio State’s Myles Martin and Indiana’s Nate Jackson (which avenged a loss Brooks had taken to Jackson prior at the same tournament). In prior years he has beaten both of Nic Gravina of Rutgers and TJ Dudley of Nebraska.

Suffice to say Brooks placement this weekend on paper looks pretty fluid. He has losses to several of the wrestlers that figure to be his top competition this weekend, over their four year careers, Dudley has given Brooks plenty of trouble, but if pre-seeds hold he will be on the other side of the bracket, along with Nickal and Martin. If Brooks gets the opportunity to face Nickal again this weekend, Brooks will look to wash the bad taste from his mouth in their last meeting, which resulted in a first period fall for Nickal.

Cash Wilcke will control his own destiny this weekend with the 197-pound weight-class receiving seven automatic bids to the NCAA tournament in St. Louis. In his redshirt freshman season Wilcke has struggled to find footing against the top tier opponents, suffering losses to Ohio State’s Kollin Moore, Nebraska’s Aaron Studebaker, and Penn State’s Matt McCutcheon all of whom are ranked in the top eight nationally at this weight.

The closest Wilcke came was in his 8-7 overtime loss to McCutcheon in the teams’ dual meeting this January. For now, Wilcke’s biggest win on the season is likely his 5-2 decision over Michigan freshman Jackson Striggow. The Big Ten schedule caused Wilcke to miss many of the wrestlers considered in the same tier, which means we don’t have history to look back on and give a definitive statement on Wilcke’s chances for qualifying for the national tournament. His seed suggests he will qualify, but with the lack of data it’s hard to determine what the outcome will be.

Redshirt freshman Steven Holloway has struggled in his first season as a starter for the Hawkeyes after bulking up from 197 pounds to fill for sophomore Sam Stoll who suffered will miss the postseason after suffering an ACL tear. The replacement of Holloway was meant to be a temporary move, until Stoll returned from an ACL injury he suffered as a freshman, but after re-injuring his knee in the Oklahoma State dual the move became permanent.

Heavyweight is an odd weight for the Big Ten as the conference boasts both #1 and #2 ranked wrestlers, Kyle Snyder of Ohio State and Connor Medbery of Wisconsin respectively, and potentially several other potential All-Americans Nick Nevills of Penn State and Michael Kroells of Minnesota. Despite the fact that potentially half of the nation’s All-Americans may come out of the Big Ten the depth drops off vastly after that, with the NCAA only awarding the conference with five automatic bids to the NCAA tournament – the fewest of any weight in the conference.