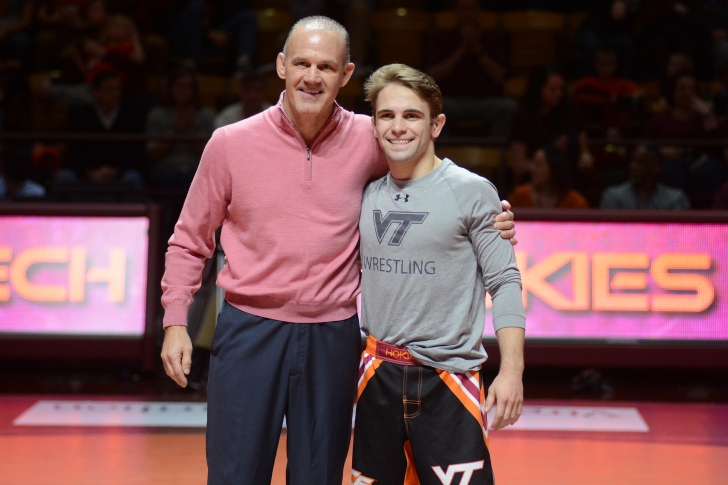 Now that Kevin Dresser has officially accepted the head coaching job for the Iowa State wrestling program, it’s time to take a look at who he might be bringing with him to Ames. While it’s tricky topic, the reality is a lot of athletes commit to a coach first, program second. The intent of this article is not to focus on the negative effects Dresser’s leaving may have on the Virginia Tech program, but rather to address the elephant in the room that this situation happens and is inevitable.

One of the first things Dresser did when he took over the Virginia Tech program was to hire Tony Robie as one of his assistant coaches. For the past decade Robie has been a key component in helping build Virginia Tech into one of the top programs in the country. And people have taken notice. When Lou Rosselli left Ohio State to take over the Oklahoma program in late 2016, Flowrestling reported that one of the calls he made was to ask Robie to join him in Norman on his staff. Robie declined, opting to stay in Blacksburg, and it is uncertain as to whether he would join Dresser at Iowa State or given his credentials he would figure to be one of the lead candidates to replace Dresser at VT. As stated yesterday, Robie is currently serving as interim head coach for the Hokies.

Zadick joined the VT program during the 2015-16 season as a volunteer assistant and was promoted to paid assistant coach at the beginning of this season. Already a well known commodity in Iowa, Zadick was a three-time NCAA All-American for the Hawkeyes from 2000-02. Following his career on the mat as a Hawkeye Zadick spent a decade on the Iowa coaching staff, filling various positions such as strength and conditioning coach, volunteer assistant, and paid assistant. Zadick was a 2010 World Team member for the United States, and his brother Bill is currently USA Wrestling Men’s freestyle head coach.

St. John is another former Hawkeye on Dresser’s staff having joined the VT program in 2015-16 as the team’s Director of Operations before taking the volunteer position this year. St. John was a four-time All-American for the Hawkeyes from 2010-14, and like Dresser is an Iowa native. St. John was a two-time Iowa high school state champion, competing for Iowa City West under Mark Reiland. Prior to joining VT St. John was an assistant coach at North Dakota State.

Let’s go ahead and get this disclaimer out of the way. Just like we saw with the Iowa State program recruits will need to seek release from their Letter of Intent they signed back in November if they plan on joining Dresser in Ames. Effectively any high school senior that does not receive a release from VT will have to sit a full year before they can compete for Iowa State. They are still allowed to redshirt and compete unattached.

IAwrestle isn’t going to speculate, but there are still a few facts that can be commented on at this time. It should be noted that of the four top 100 wrestlers IAwrestle is only aware of Cole Manley officially stating he remains committed to Virginia Tech (Source: Knops Knotes Tweet).

Another interesting connection is between Hunter Bolen and Dresser. Prior to taking over Virginia Tech, Dresser was the head coach of the Christiansburg High School team for ten seasons, which is where Bolen currently attends.

Finally, VT does have a 2018 recruit on the board in Ohio’s Mitch Moore. Mitch’s brother, Brent, was a top 100 recruit in the class of 2016 for VT. Since Mitch is only a junior and has not signed a Letter of Intent, he would be free to switch his verbal to Iowa State without any restrictions if he chose to do so.

The Southeast Regional Training Center, which VT’s RTC program, currently only hosts one full-time athlete at this time, and that is 2014 NCAA runner-up Devin Carter. Carter is potentially Dresser’s most accomplished wrestler during his decade at the helm, with Carter winning four conference titles, and is the program’s first and only three-time NCAA All-American. Carter sits top five in three school record categories NCAA tournament wins (first), pins (second), and career victories (fifth).

St. John is also listed as a resident athlete and has competed at 70 kilograms domestically since graduating from Iowa.

Just like with recruits, IAwrestle doesn’t have the intent to speculate who might leave, but we will use this space to inform on the process for any athlete who could potentially follow Dresser to Ames. Just like the recruits, current VT athletes will need to request their release from the school to attend Iowa State. If the school does grant the athlete’s request they will be eligible to compete right away for the Cyclones, but if the request is not granted the student athlete can only compete unattached their first season at Iowa State if they choose to leave.