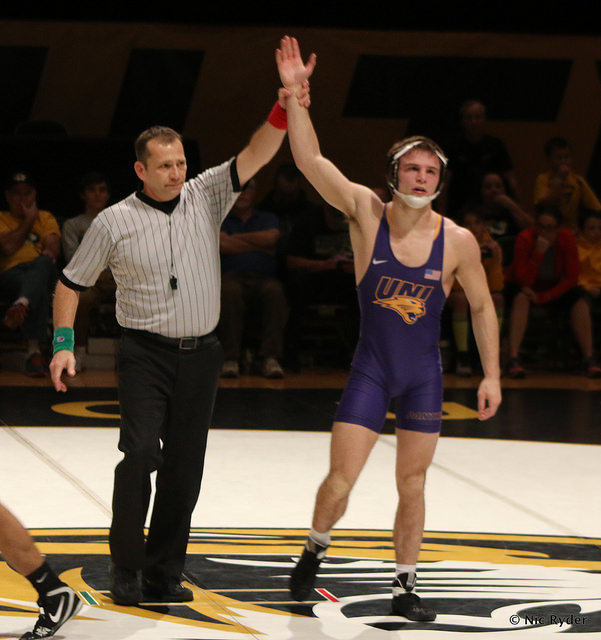 From UNI Athletics. Link to their article.

CLEVELAND, Ohio – UNI wrestler No. 9 Max Thomsen earned the MAC’s Wrestler of the Week honors after knocking off No. 3 Lavion Mayes and helping the Panthers secure a win over No. 7 Missouri.

Thomsen, a redshirt freshman from La Porte City, Iowa, ended his 2017 dual season with the biggest win of his career at 149 pounds.

His weekend started with a 6-0 decision over Buffalo’s No. 29 Colt Cotten. Thomsen had

more than 4 minutes of riding time. Thomsen followed it up with knocking off his fifth top-20 ranked opponent in Mayes.

After a scoreless first period, Thomsen earned the first point off an escape. He had Mayes to his back twice in the third period to earn four nearfall points. Thomsen allowed just two escapes to go on to win 9-2, helping No. 19 UNI knock off No. 7 Missouri in the Panthers’ final dual of the season. The 25-10 win over Missouri secured the regular-season conference title for UNI.

Mayes had beaten Thomsen 4-2 earlier in the year at the Southern Scuffle. Thomsen finished his regular season ranked third in the MAC at 149 pounds. He finished the dual season 25-4 overall, 11-3 duals, 7-1 in MAC duals.

Thomsen is just the second Panther this season to earn the conference’s highest weekly honor. Taylor Lujan was named Wrestler of the Week Dec. 7.

UNI will host the MAC Championships March 4-5 in the McLeod Center. Tickets are on sale now at UNIPanthers.com or by calling (319) 273-4849.

Price of admission for the tournament is included with all paid season ticket passes. Complimentary season passes do not include the MAC tournament.

One thought on “Thomsen Named MAC Wrestler of the Week”