Iowa State Will Try to Rebound Against West Virginia 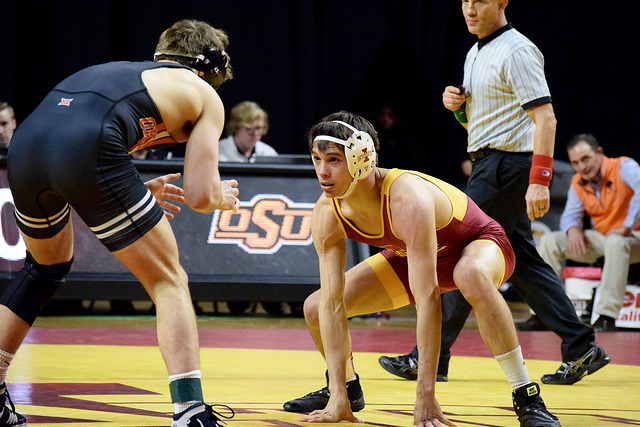 Iowa State came into Friday’s dual against Pittsburgh with every chance of winning their first dual since November. The team score was tied at 6-6 after three matches, but from there things fell apart for the Cyclones. With Pittsburgh taking both swing matches at 133 and 141 pounds the Cyclones found themselves in a hole early. Senior Gabe Moreno did his best to put his team back into the dual with a first period fall at 149 pounds evening the score, but Pittsburgh was able to answer back with a fall of their own at 157 pounds. The remaining six matches went relatively to chalk ending with the Cyclones defeat.

Tomorrow’s dual figures to favor the Cyclones heavily, with Wrestle Stat’s computer going as far as picking Iowa State in seven of the ten matches. The computer also projects the Cyclones to win four of their matches by bonus, though Pat Downey availability at 184 pounds will continue to be in question with the junior only wrestling seven matches on the season.

125: Friday night’s 3-2 victory over Pitt’s LJ Bentley could provide a big boost to Larson, who picked up his first dual win since the first week of the season. Prior to that Larson had loss his previous four dual starts, three of those coming after we learned that freshman Markus Simmons would no longer be an option at 125 pounds. Tomorrow’s match against Devin Brown won’t be a breeze for Larson, but it still should be a highly winnable match for the senior. As the Cyclones look to close out the season, as strong finish from Larson could give the Cyclones a team boost.

133: Hall will enter tomorrow’s matchup a very strong favorite to win his 100th career match against Stainbrook, who he is 4-1 in his career against. Both wrestlers have been competing against each other since their freshman year, with Stainbrook winning his only meeting 5-4 at the Big 12 Championships. Since the duo moved up to 133 pounds, Hall has now won three straight, which gives Hall a great opprotunity to get back on track after losing a match to a tough Dom Forys on Friday night.

149: Moreno had a tough return to the mat, going 0-2 against the Oklahoma teams, but he was near perfect in the Pittsburgh dual, earning a fall against Mikey Racciato. After a strong rebound Friday night, tomorrow’s meeting against Monserrat could give us an indication as to whether the old Gabe Moreno is truly back to his old self.

197: West Virginia only has two ranked wrestlers coming into this week’s matchup, and while Harrington will indeed be the underdog there is always the chance that he can turn it on and potentially beat a wrestler like Smith. With his team backed up against a wall and a shutout looming against Oklahoma State, Harrington delivered a big 3-2 victory over Derek White in his last time out. While White may not be ranked, Wrestle Stat has him pegged #12 in the nation. Regardless of ranking, White was a Midlands runner-up in 2015 and is counted as a quality win. A victory for Harrington could go a long ways in boosting the confidence for the former high school national champion at a very key point in the season.