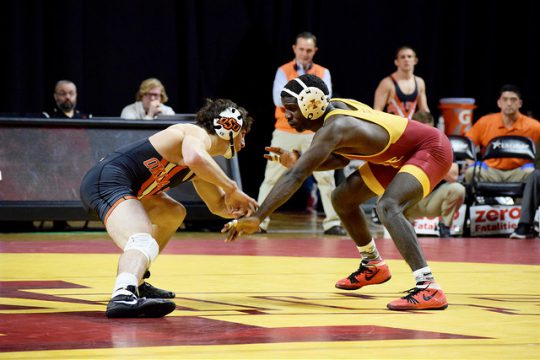 Even without a dual on the Iowa State schedule, last week was pretty eventful with head coach Kevin Jackson announcing he will be stepping down from his position at season’s end, and top recruits Austin Gomez, Jake Allar, and Ethan Smith all requesting their release from their Letter of Intent to wrestle for the University. With all of the drama surrounding the program on whether or not Jackson would be able to retain his position as coach for next year perhaps now the Cyclones can put their full attention on their own wrestling, rather than carrying the mental weight of their performance having an impact on their coach’s future.

Pittsburgh also comes into this dual at an odd position with the team dismissing head coach Jason Peters last month, and are 1-2 since the change in leadership. The Panthers feature several talented wrestlers including #8 Dom Forys (133), #22 Nick Zanetta (141), #12 TeShan Campbell (165), and #21 Ryan Solomon (285).

133: The Hall-Forys matchup will setup a meeting between potentially the two best wrestlers from each team in a true tossup match. Forys will hold the advantage in both the rankings, but Hall holds the advantage in their head-to-head results, winning their only meeting 13-7 at last year’s NCAAs. This is a key match the Cyclones will need to win to pull the upset over Pitt.

141: Senior John Meeks is the in middle of rough patch this season, losing four of his last five matches and is very much in need of a quality win to build his resume for March. In the first set of Coaches’ rankings Zanetta was ranked #31, which is exactly the type of wrestler Meeks needs to prove he can beat to be NCAA qualifier worthy. To Meeks’s credit his last four losses have come to Coaches’ ranked #1, #3, #25, and UR so his “slump” is understandable.

149: It wasn’t the most ideal timing for Gabe Moreno to make his return to 149 pounds and the starting lineup as he was tasked to face Anthony Collica (Oklahoma State) and Davion Jeffries (Oklahoma) #2 and #13 in the Coaches’ rankings respectively. This weekend’s match against Mikey Racciato will be a good test for Moreno to see if he has what it takes to punch his third ticket to the NCAA tournament. Racciato was #31 in the Coaches’ rankings.

184: Using Wrestle Stat’s prediction algorithm the surest path to victory for the Cyclones this weekend will hinge heavily upon Patrick Downey’s performance at 184 pounds. This is a weight that Pittsburgh has struggled to fill this season as Zach Bruce is just one of several wrestlers that has been used in the starting lineup. Wrestle Stat predicts bonus for Downey, as opposed to a regular decision for Carson Powell who is Iowa State’s backup at the weight. It’s laid out below, but the computer predicts that without Downey’s major decision the Cyclones will be staring down their tenth loss of the season, but with Downey in the lineup Iowa State will have a chance to win the dual.

285: Speaking of a rough patch heavyweight Quean Smith was pinned in both of his matches against the Oklahoma teams, but his ability to be in this match could swing the dual for his team. Smith was able to keep it close with Arizona State’s Tanner Hall last month, and it’s that Quean Smith Iowa State will need against Ryan Solomon. In a dual that has several matches that can go either way, Smith stealing a match Pittsburgh is favored in could net the Cyclones their second dual win of the year.

The Cyclones were off last week, but that didn’t mean all of the team had the weekend off as 157 pound freshman Colston DiBlasi headed back to his native state of Missouri to pick up a Missouri Valley College Open title. DiBlasi won his title by picking up three first period falls (and a medical forfeit) which also earned him the tournament’s Outstanding Wrestler award. DiBlasi is currently ranked #3 in the nation for falls on the season.

We haven’t seen him since the Midlands, but Dane Pestano could be returning to the lineup soon for the Cyclones after dealing with a minor injury. In the meantime freshman Logan Breitenbach has been the fill in man at 165 pounds, and he is currently 0-5 to start his dual career

Alternative finish if Downey is unable to go: