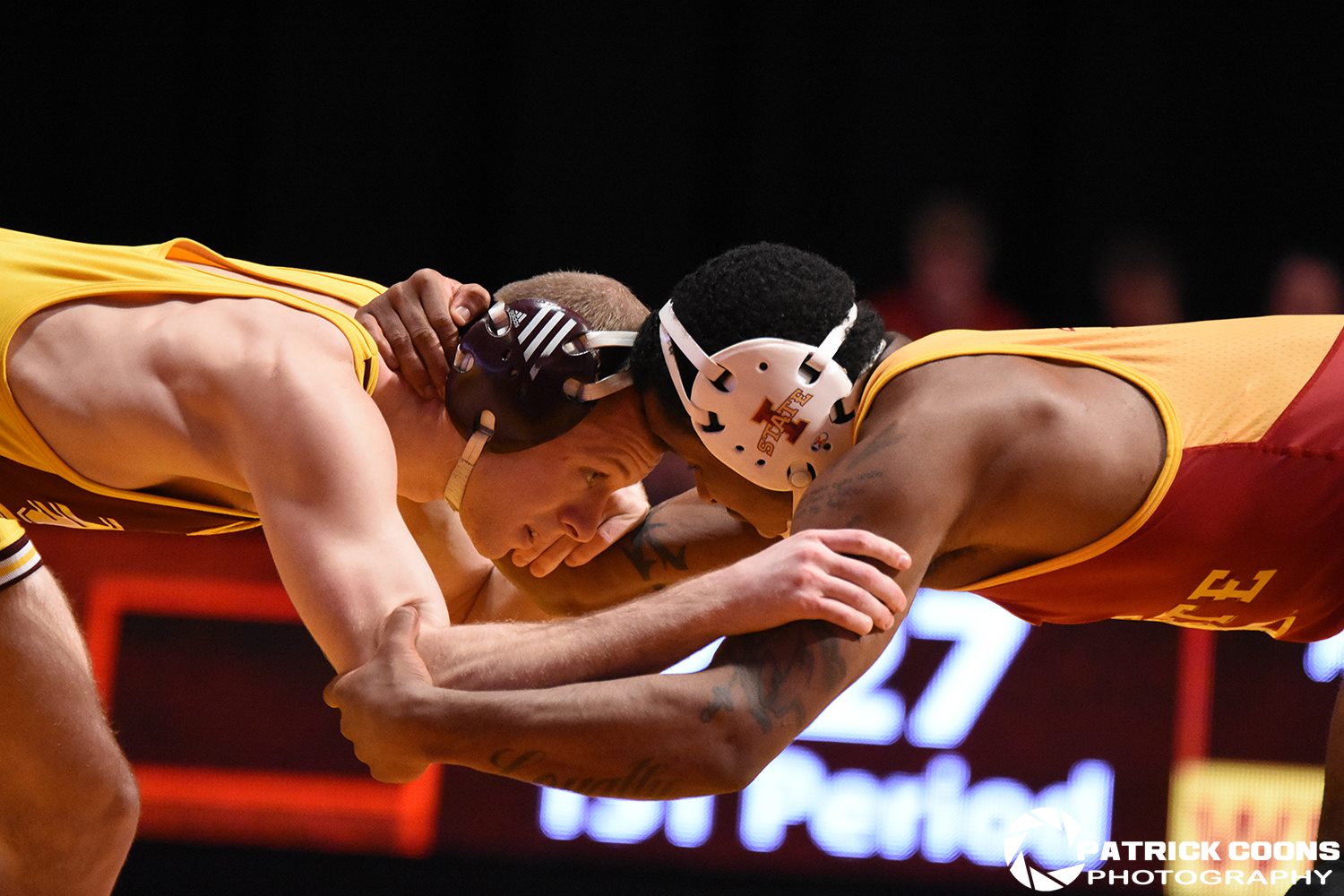 Kyle Larson came out for the Cyclones at 125, and got things started with a 4-2 victory. Following a scoreless first period, Larson was able to get a head in the hole go behind and escape to go up 3-0. West Virginia’s Devin Brown maneauvered a reversal but it wasn’t enough as Larson held him off for a 4-2 win. Larson went 2-0 this weekend, building some momentum heading into the post season.

Earl Hall was able to grab a 2-1 decision over Corey Stainbrook, following a second period reversal. Hall bounced back from a loss at the hands of #8 Dom Forys Friday. With that win, Hall became the 37th Cyclone to pick up 100 victories over a career.

At 141 John Meeks had seven takedowns, with a variety of leg attacks and scored early and often for a 16-9 victory. Meeks did give up a takedown late to lose the major, but looked great on the road this weekend. Gabe Moreno wrestled 149 for the Cyclones, and was unable to get a win after getting an early takedown and riding out the first period. Trailing 5-4 late, Moreno had several last second takedown attempts, eventually falling to a 9-5 loss. At 157, Colston DiBlasi made quick work of his opponent, hitting a slide by, immediately slapping on a cradle, and after several adjustments getting the fall.

At 165 the tide turned for the Cyclones. Logan Breitenbach was caught trying to roll in the second, and fell by fall to West Virginia senior Dylan Cotrell. At 174 Lelund Weatherspoon completed a perfect weekend with a 19-3 tech fall. Weatherspoon was relentless with upper body attacks, leg attacks, and slick re-attacks. Carson Powell lost a heartbreaking 5-3 loss at 184. After an uneventful first period, Powell grabbed a quick reversal in the 2nd, and gathered riding time. In the 3rd however, Powell gave up an escape and a late takedown to send the match into overtime, where Powell was defeated 5-3.

The Mountaineers #5 wrestler Jake Smith overpowered Marcus Harrington from the feet and on top, and won 12-0. The Cyclones sent out senior Joe Scanlan at heavyweight. Scanlan was leading 1-0 midway through the second, but ended up going to his back after a takedown, and eventually being pinned sealing the fate of the Cyclones.

The Cyclones return to action next Sunday, where they will take on the Minnesota Golden Gophers. Following that dual, the Cyclones will have two weeks off before heading to the Big 12 tournament in Tulsa, Oklahoma.