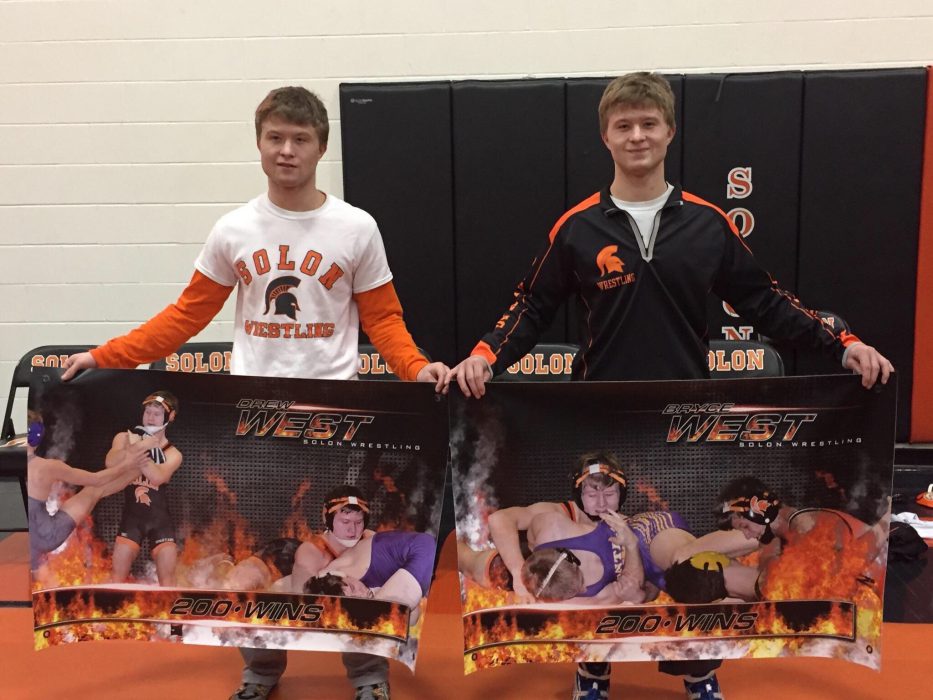 For any wrestler to reach 200 wins in their high school career is quite an accomplishment. Especially in Iowa where teams don’t get to travel all over the country and very few have reached that 200 win milestone. For two twin brothers to both reach that mark and on the same night is unheard of!

Bryce and Drew West of Solon did just that at their regional dual meet Tuesday night in front of the home crowd as their team also qualified for the state dual championships next week in Des Moines.

Bryce West is a two-time state champ and three-time place winner with a 201-3 career record. Two of those losses coming his freshman year when he placed third at state. The other came this year to fellow two-time state champ Brody Teske of Fort Dodge in perhaps the match of the year in Iowa.

Drew West is a state champ and three-time place winner with a career record of 200-3. His only 2 losses coming into this year where at the state tournament to two-time state hampion Alex Thomsen of Underwood. His other loss came earlier this year to Missouri state champion Malik Johnson.

Both brothers will look to stand on top of the podium one more time next week at the state tournament in Des Moines. They will also be trying to bring home Solon’s first ever wrestling team title as well as the Spartans qualified 13 wrestlers for districts this Saturday.

I was able to catch up with Bryce & Drew to discuss what this accomplishment meant to them.

“It’s a huge accomplishment for both of us to get 200 wins in the same day in front of the home crowd,” Bryce told IAwrestle, “We wouldn’t of been to make this all happen without all the coaches we have had that helped us out. The next goal is to win state individually and as a team.”

Drew added, “It means a lot to me to share 200 wins because we both accomplished the big goal of 200 and we happened to both get it on the same night and at home.”

The brothers are still undecided on where they will wrestle at in college next year. I can assure you that what ever program lands them will be very happy to have them both!