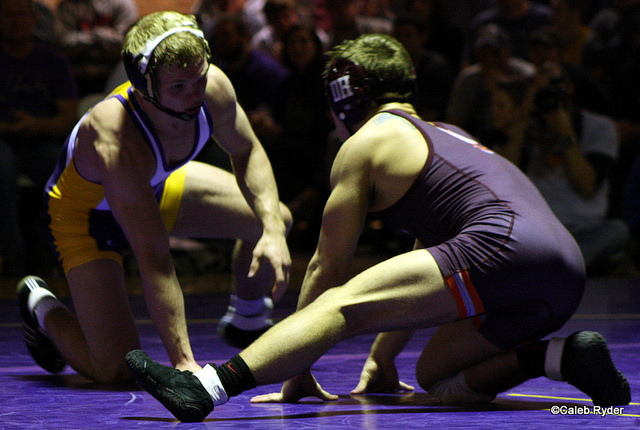 In the last home dual of the year the Northern Iowa Panthers they will take on the University at Buffalo, State College of New York, Bulls. The team with the longest name in the MAC has improved it’s conference record this season, though they had a rough time out last dual, dropping a 35-3 loss at Central Michigan last Sunday.

Northern Iowa returns to the West Gym, after falling 27-13 in a dual with Oklahoma in the McLeod Center. It’s senior night for UNI, and they will honor six of them. Dylan Peters, Tyler Willers, Cooper Moore, Jared Bartel,  JJ Everard, and Mark Jolcover will all graduate from UNI.

“They understand that they’re part of the history of the program, and they want to continue to build on that program. I’m proud of every one of these guys.”

After their seniors are honored, the Panthers turn their sights to Buffalo, before hitting the road to Missouri for the MAC championship. The Bulls have an improved lineup this season, but the combination of a 133, 149, and 165-184 should put UNI ahead and ahead for good. If UNI can score bonus points in all of those matches the dual should never be in doubt.

There is only one match scheduled to take place between ranked wrestlers. At 133 pounds #10 Josh Alber will take on #17 Bryan Lantry. Lantry is 15-5 on the year, with all his losses coming to men currently in the top-25. Alber has had one of the toughest schedules in the country at 133, as the MAC is loaded with top-25 talent, however Alber was able to win by pinfall last season and there’s no expectation that he should lose this years bout.

At 197 Jacob Holschlag will look to continue defeating top-25 opponents as he takes on #22 James Benjamen. Benjamen is 15-3 this year, but hasn’t really wrestled the top talent that 197 has to offer. Holschlag is coming off a 9-5 win over then-#19 Brand Johnson, and will look to steal (probably, as he more than likely won’t be allocated one) a spot at 197 during the MAC Championships, and win here would go a long way towards building confidence that he could do that.

The dual starts Friday night at 7, but because of the recognition of the seniors the action might be a little delayed. Either way I’d get there early, it’s the last home dual of the year and good seats won’t be easy to come by. We’ll have a live play by play thread going, and later this week we’ll have the MAC regular season championship dual breakdown, so watch for that!

One thought on “Senior Day as Panthers Take On Bulls”