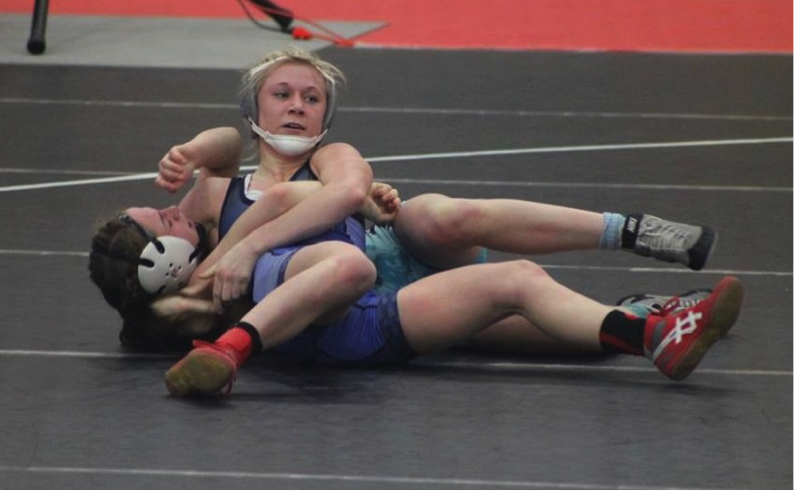 Coming off a repeat as conference champion, Felicity Taylor, a 106 pound junior from South Winn finds herself in the driver’s seat this weekend at sectionals.

Felicity Taylor, who holds a 33-7 record this season should take the #1 seed after avenging an earlier loss to Ethan Stubbs in last week’s conference championship match, winning the bout 4-3. Taylor also faced Brady Wilkinson of Sumner-Fredericksburg earlier this season, winning the match by a 9-1 major decision. The weight class will most likely only have these three wrestlers competing for the two spots to advance to Districts. Look for a third match between Taylor and Stubbs in the Sectional finals.

Ali Gerbracht, a freshman from AGWSR will most likely face four other wrestlers in the 106 pound weight class this weekend. Gerbracht, who holds a 15-10 record for the season, has a win by fall over Katie Julius of St. Edmond and has a loss by fall to Keaton Wilson of Belmond-Klemme. Also in the Sectional is Jacob Graham of Eagle Grove. The favorite for this Sectional is #7 ranked Caiden Jones of Lake Mills who holds 40-2 record for the season.

Alaina Sunlin, a 106 pound freshman from Monticello looks to have a field of five wrestlers within her Sectional this weekend. Sunlin has picked up a fall over Adam Schmit of Beckman Catholic, Dyersville on her way to a 13-19 record this season. Also in the Sectional is Wahlert-Dubuque’s, Dylan Digman who holds a 13-14 record and West Delaware-Manchester freshman, Luke Farmer who sits at 14-24. Jack Streicher from Mt. Vernon looks to be the one to beat with a 29-8 record for the year.

Don’t forget to check back on Monday for full results from this weekend’s Class 1A & Class 2A sectionals!