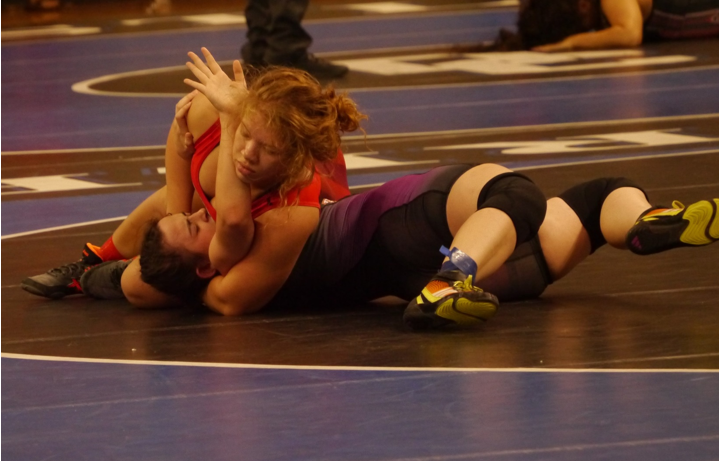 The final tournament leading up to the WCWA (Women’s Collegiate Wrestling Association) Nationals took place last weekend as four of Iowa’s own took to the mats.

Jasmine Bailey of Iowa City, continued her march towards the WCWA Nationals with another strong showing at one of the toughest tournaments of the year. Bailey, who wrestles at 143 pounds as a junior for McKendreeUniversity (Lebanon, IL) started her tournament with a bye followed by a 10-0 tech fall over Erin Scheidt of Midland University (Fremont, NE). Scheidt is ranked #8 at 155 pounds in the January 3rdWCWA rankings. In the quarterfinals, Bailey faced Mari Delayo-Fierro of Missouri Baptist (St. Louis, MO) where she notched another tech fall win taking the match 12-1.

Moving into the semifinals, Bailey faced #7-ranked Carly Jaramillo of Southwest Oregon Community College (Coos Bay, OR). Bailey edged Jaramillo out with a 4-2 decision to advance to the finals against Skylar Grote of Lafayette College (Easton, PA). Bailey was leading 3-2 until the final seconds of the match where she gave up a late takedown to finish with a 3-4 loss. With her second place finish and another victory over a ranked wrestler in her weight class, Bailey is showing that she will be a solid contender at the WCWA Nationals February 10-11.

Anna Poyner of New Hartford, a 136 pound junior for Missouri Valley College (Marshall, MO),sustained an injury in practice the previous day and was not able to compete.

Veronica Goodale of Cedar Falls, and formerly of Waldorf University (Forest City, IA) wrestled unattached at 191 pounds. Goodale faced Darcie Obrien (unattached) in the opening round and gave up a 2-10 decision while sustaining an injury to knock her out of the tournament.

Rachel Watters of Ankeny, who is currently ranked #5 at 155 pounds, wrestled at 170 as a freshman for Oklahoma City University in Saturday’s tournament. Watters had a bye in the first round followed by a 2-8 loss to #4-ranked Brandy Lowe of McKendree. On the consolation side, Watters had a bye followed by a 10-0 tech fall victory over Jessie Flynn of Lyon University (Batesville, AR). Watters faced Sandra Garcia of Lindenwood University-Belleville (Belleville, IL) in her next match where she picked up a 4-0 decision. In what ended up as Watters final match of the day, she faced Precious Bell of Menlo College (Atherton, CA). Watters sustained an injury shortly into the match and forfeited by injury default. She forfeited her remaining match, as well placing her 8th in the tournament.

Waldorf University of Forest City also travelled to the Bearcat Open with four of their top wrestlers representing the Warriors. Freshmen Dennielle Phillip (116 pounds) and Amanda Mercier (109) as well as juniorsBailey McLaughlin (136) andDe’anna Prince (123 pounds) all competed in the tournament. Prince went 4-3 for the day securing an 8thplace finish to lead the Warriors in their effort.

Per the Waldorf University Sports Information office: “Our offense wasn’t too far from where it needed to be, but at this level a little is too far,” Gilder said. “There are still areas we need to focus on and we have time to make the necessary adjustments. The effort was solid for our first tournament back, but it’s time to dust off and get ready to finish the season strong.”

The WCWA Nationals are scheduled for February 10-11 at Oklahoma City University. As always we will bring you a preview and updates on the Iowa women who will be taking part in the competition.

Lauren Louive of the Hawkeye Wrestling Club will be wrestling in the Dave Schultz Memorial International Open in Colorado Springs on Friday with action starting at 10:00 a.m. CST. Louiveof Massilon, Ohio and currently residing in Iowa City, wrestled for University of the Cumberlands in Williamsburg, KY from 2008-2013. She is a 4-time WCWA All-American and current volunteer Assistant Wrestling Coach at Cornell College (Mount Vernon, IA). Louive was a 2012 Senior Pan American Silver Medalist at 67 kg and is currently ranked #7 at 58 kg in the USA Wrestling Senior Women’s Rankings (January 4th). Although this is a qualifier to the U.S. Senior World Team Trials in April, Louive has already qualified for the Trials with her 5th place finish in December’s U.S. Senior Nationals.

Let’s root Louive to a solid finish on Friday!