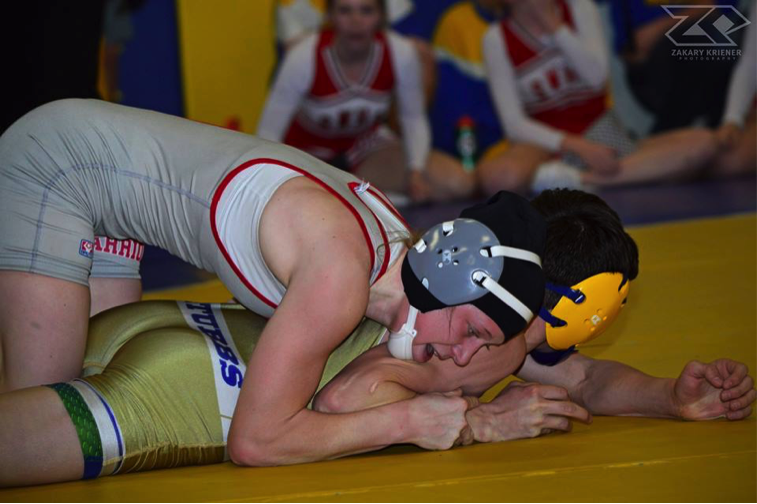 As the season comes down to the final few weeks of competition, the wrestlers from most programs were hard at work over the weekend competing in their respective conference tournaments. There were several varsity standout performances from the females, including a conference champion for the second year in a row!

Some featured highlights include the following varsity performances this week:

Hannah Payne, a freshman from South Central Calhoun went 3-2 picking up a pin and two forfeits to improve her varsity record to 7-23 for the season.

Ali Gerbracht, a 106 pound freshman from AGWSR, picked up two pins to go 2-2 for the week and secure a 5th place finish in the NICL (North Iowa Cedar League). Gerbracht’s varsity record stands at 15-10 for the season.

Ali Gerbracht of AGWSR locks up the pin and takes 5th in the NICL at 106 pounds. Photo submitted.

Felicity Taylor, a junior from South Winneshiek, went 7-0 this week picking up two falls, three decisions and two forfeits. In the conference tournament, Taylor went 2-0 meeting Ethan Stubbs (MFL/MAR-MAC) in the finals. Taylor avenged a loss form earlier this season beating Stubbs 4-3 to take the conference title. This marks the second year in a row that Taylor has captured the UIC (Upper Iowa Conference) 106 pound championship! Taylor’s varsity record sits at 33-7 for the season.

Tateum Park, a freshman from Davenport North went 2-2 for the week picking up a 13-9 decision and a forfeit. Park finished 4th place in the MAC (Mississippi Athletic Conference) tournament. Park’s varsity record stands at 23-12 for the season.

Be sure to check out our sectionals preview on Thursday!