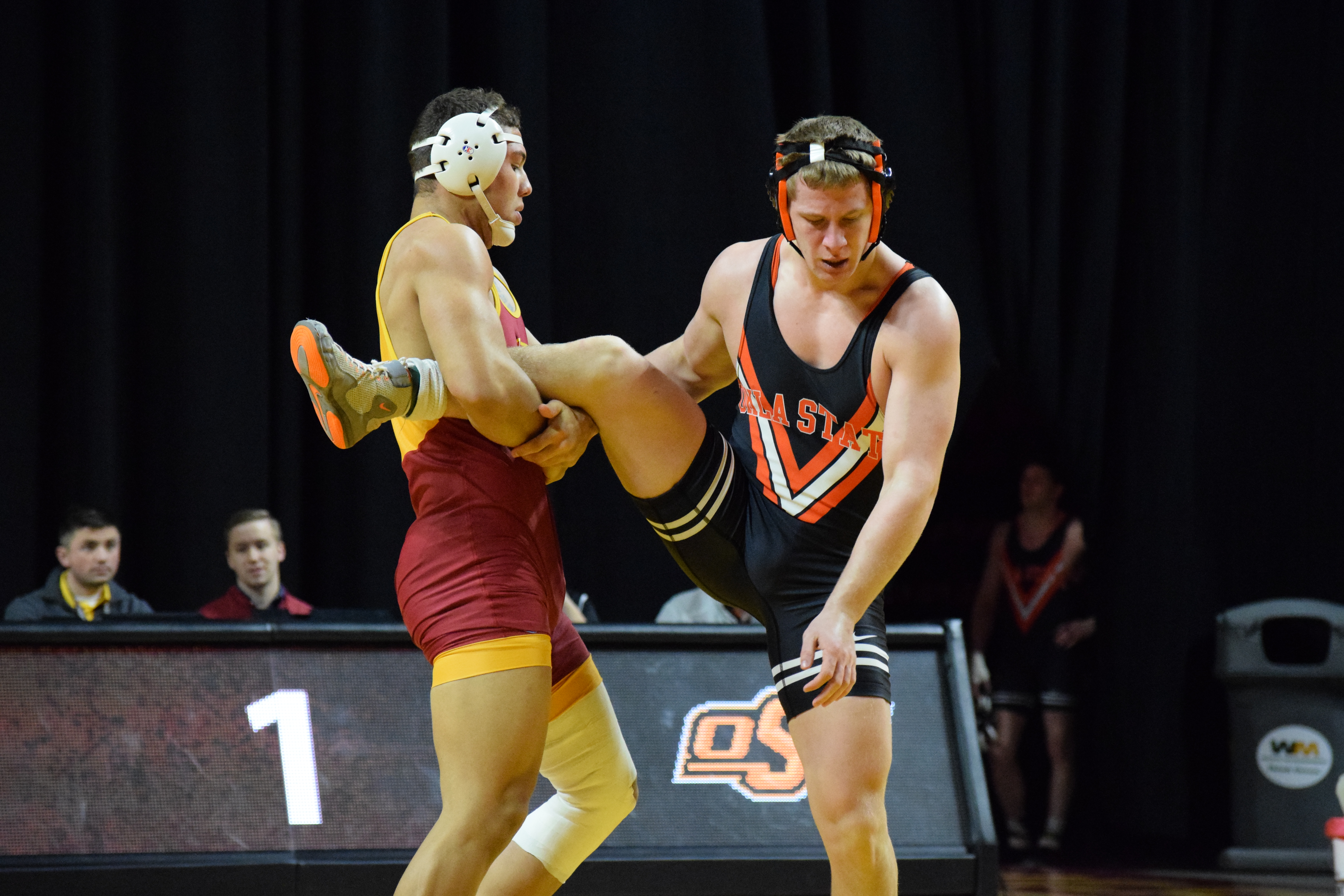 Iowa State came back from a rough outing on Friday against the Oklahoma Sooners to wrestle the #1 ranked Oklahoma State Cowboys. The Cowboys feature ten ranked wrestlers by almost any publication, and that showed today in Hilton. The bright spot came at 197, where redshirt sophomore and Waterloo West State 2X champion Marcus Harrington defeated Derek White 3-2. The Cyclones falls to 1-8 on the dual season, with duals at Pittsburgh, West Virginia, and Minnesota at home left on the schedule. Of note, returning All American and always entertaining Pat Downey did not wrestle this weekend, and has only wrestled 4 matches on the season. Downey would have wrestled returning all american and currently ranked 7th Nolan Boyd of the Cowboys.

At 125 Kyle Larson wrestled again for the Cyclones, and fell 8-2 to the Cowboys #13 Nick Piccininni. Larson tried various attacks, but struggled to get away from the redshirt freshman. Markus Simmons picked up 4th yesterday at  DuHawk open, telling us Kyle Larson will be the man at 125 moving forward. 133 featured two ranked wrestlers, where #3 Kaid Brock was able to slick his way to a 7-4 victory. The Cyclones 2x All American Earl Hall was able to get a takedown early, but gave up ridetime, 2 escapes and 2 takedowns to the Cowboy freshman phenom. John Meeks again wrestled for the Cyclones at 141, and lost to returning national champion and #1 ranked Dean Heil. Meeks hung tough with the cowboy, losing 8-5 and scored on a beautiful blast double. Heil remained unflustered, and was able to score 3 takedowns of his own for the victory.

Gabe Moreno came back from his injury, and appears to be manning the spot at 149. Moreno was unable to escape the #2 ranked Anthony Collica, and lost a 3-0 decision. Despite losing both matches this weekend, Moreno appears much improved up at the 149 pound weight class. At 157 pounds the Cowboys elected to not wrestle 5th ranked and returning All American Joe Smith, and instead threw out Davey Dolan. Dolan was able beat Diblasi with 2 takedowns, and won a 5-2 decision. At 165, the always entertaining Chandler Rogers was able to pin Logan Breitenbach in a tight assassin hold, and picked up the pinfall at the 1:51 mark. 174 featured our other ranked matchup, where #6 Kyle Crutchmer was able to fend off #9 Lelund Weatherspoon 3-2. Crutchmer score a blast double early, and held off a late surge from Weatherspoon. At 184, the Cyclones elected to not send out Pat Downey, and sent out redshirt senior Carson Powell. Boyd was able to score on a variety of tilts and takedowns, to pick up a 14-2 major decision. At 197, Marcus Harrington scored a beautiful first period takedown, and held off Cowboy Derek White for a 3-2 decision. At heavyweight, the #6 ranked Austin Schaefer picked up a fall over Quean Smith at the 3:50 mark, off a throw attempt from Smith.