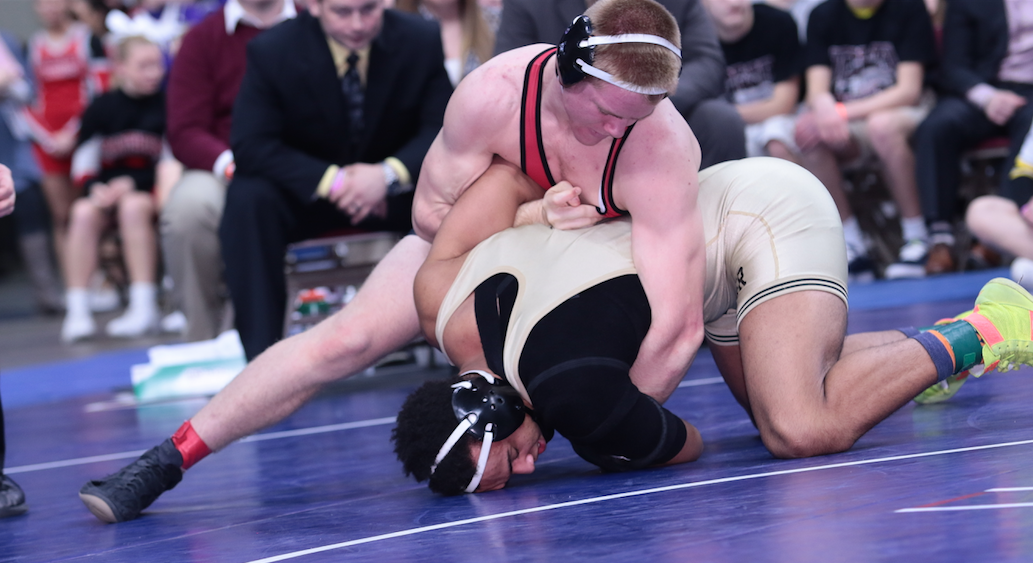 It’s not ordinarily seen that members of the same conference are in two different wrestling classes, but the WaMac conference is anything but ordinary. Boasting three ranked teams across 2A and 3A are 34 ranked wrestlers, the gym in Williamsburg will be rocking today as the Raiders host the 2017 WaMac Conference Tournament.
106
Ranked Wrestlers:
Graysen Kesterson (1) – Williamsburg
Carter Weeks (6) – Vinton Shellsburg
Keegan Scheeler (8) – Center Point – Urbana
Jack Streicher (10) – Mount Vernon

Kesterson’s lone loss this year came by a 5-1 decision to the hands of Scheeler at North Linn Invitational, who avenged an earlier loss by fall to Kesterson. Since that December loss, Kesterson has reeled off 13 straight, including 9 falls and 2 Major Decisions. Scheeler’s only other losses at this weight came to guys ranked higher than him and he has wrestled well since dropping to 106 including a win over Jack Streicher. #6 Carter Weeks has recently dropped to 106 as well and has a win over Scheeler at 113lbs.

Fuessley has yet to drop a match to anyone in 2A, with all three losses coming to 1A opponents, including two to 1A #1 Cael Happel. He also owns 2 wins over Schropp. Jacob Close suffered back to back losses in early December, including a 5-0 decision to Schropp but has rebounded with 9 straight, including 5 falls. Jalen Schropp is in line to be the spoiler as he owns wins over Weeks and Close, but has lost twice to Fuessley.

Bryce West has 2 matches that have gone the distance all year. He majored the #2 ranked wrester, Drake Doolittle and looks to be untouchable this year. Who will he face in the finals? I think it’s down to Tyler Bossom (Central Dewitt), Luke Radeke (Vinton Shellsburg) or Ryan Phillips (West Delaware). Radeke owns a win over Bossom, who owns a win over Phillips. Radeke has the hot hand right now and should be seeded 2/3 to stay away from West on the top until the finals.

Another West but the same results. Drew West has only 1 loss on the season, to #15 nationally ranked Malik Johnson of CBC but has rolled through this weight class so far with his closest match being 7-0. Brady Fritz hasn’t lost at 126lbs, with all 4 of his losses coming at 132, including one to Drew West who also bumped up for that dual.

Bradan Birt has 2 losses on the year, one to Drew West 8-7 who bumped up in the dual, and another to Derek Holschlag (Union) in SV. I don’t see any reason Bradan won’t continue his dominance as his closest conference match was a 7-1 decision over Justin Light from Mt. Vernon. Tanner Probasco has also experience much success in the conference also going undefeated and defeating the aforementioned Justing Light 12-2, and he has bumped to 138 throughout the year. His 3 losses have all come at 138lbs. I don’t see anyone challenging these two.

Ben Carr struggled early in the season going 4-4 in his first 8 matches before rattling off 14 straight, including wins over 4 conference foes. Colton Vest started the year at 145 with only 1 loss before Christmas, and is unbeaten since moving down to 138, winning 10 straight, including 8 by fall. He has yet to lose to a 2A opponent. Jake Recker (Beckman Catholic) or Quinn Murphy (Clear Creek-Amana) could knock out Carr if they’re on the same side of the bracket. Carr only beat Recker 5-4 earlier, and clipped Murphy in SV 5-3.

Mangold avenged an earlier loss to #9 Ranked Keegan Tenge at the J-Hawk Invite, before losing to Mason Hulse (Boone) in the finals. He owns wins over 4 conference opponents, but Gage Blythe (Williamsburg) and Scott Betterton (Vinton) battled him to 1 pt decisions. Betterton owns some good wins but hasn’t had that signature win yet. Caleb Conway from Marion is undefeated on the year, including 2 wins over 3A #8 Josh Gerke.

Colin Conway has dominated this year with only 3 matches that have gone the distance. Of those three, however, two are losses, including one to Conference foe #2 Isaac Judge (South Tama). He has also lost twice to #1 Joe Kelly (West Liberty). Isaac Judge has been equally dominate with only a handful of matches not ending in a fall. One of those was a 3-0 decision to conference rival Graeson Dall. Speaking of Dall, his 4 losses have come from #1 Kelly, #2 Judge, 3A #4 @ 152, Cayd Lara and 3A #6 @152 Wempen. The latter two also account for Isaac Judge’s only losses. This weight looks to be one of the toughest in the conference. (Dall has been injured and is not expected to wrestle.)

Trevor Nelson has been solid all year with only a few blemishes on the record. One of those blemishes belongs to Luke Hageman from Beckman Catholic, who beat Nelson in SV -3 before Christmas. Hageman is wrestling extremely well right now, winning 10 of his last 11 non-forfeit matches by Fall or Tech Fall. Look for Kyle Irwin (Central Dewitt) to maybe make a run at Nelson in the Semis.

Ira Kuehn has settled into 170 this year and it’s shown by his undefeated record, however, the competition he’s faced thus far could be deemed “average”. Within the conference, his closest match is with Solon’s Mike Hoyle, a 4-2 decision. Brady Bartz has some head scratching losses (4 to conference opponents) and will depend on which Bartz shows as to how well he could do. Vinton-Shellsburg Kort Johnson owns 2 wins over Bartz, but can’t seem to get past whomever is wrestling for South Tama, and another to Beckman’s Owen Grover. Solon’s Mike Hoyle should reach the finals now that he’s at 170 full time, with his only in conference loss to Ira Kuehn.

This weight is Max Lyon’s and he is making sure of it. The battle is for second place. Harrison Goebel has 1 other loss to someone not named Lyon, and owns a Head to Head win over Dillon Diltz, although it was by Inj. Default. Diltz has a few losses, one to Lyon, one to Goebel, while battling injuries but has been hot as of late. It will be Diltz and Goebel in the semi finals to see who gets Lyon in the finals.

Kluesner must be feeding off of Lyon as he has been over-powering his opponents all season save one loss to 1A #3 Walker Even from Don Bosco. Sam Moore had some early season losses, but has won 15 of his last 16, with the lone loss to #1 Bryce Esmoil from West Liberty. He also owns a head to head over Reece Westphal, which is Westphal’s only loss.

Jack Cochrane owns an Ultimate Tie Breaker win over Smith, and 3 losses to other ranked foes from 1A and 2A. Smith has 2 other losses, including a 5-1 loss to 3A #1 Wyatt Wriedt of North Scott and also owns two victories over Blade Durbala. Durbala’s only other loss has come to 2A #1 Noah Broderson. Like 152, this weight will be an exciting one to watch.

Costello has dominated this weight class this year, with only 4 matches getting out of the first period. He is also battle tested as he knocked off Mt. Vernons Tristan Wirfs, 3-2, and followed that up with a 3-2 win of 1A #1 Jared Brinkman from Iowa City Regina. Tristan Wirfs hasn’t has a lot of matches this year, but gave Costello all he could handle. Tyler Linderbaum has suffered a few more losses than he’d like, including one to #2 220 Kadon Hulett from Creston Orient-Macksburg but has solidified his resume and should give Wirfs fits in the semis. They wrestled Thursday night with Wirfs winning 3-2. I do think Wirfs sneaks by and reaches the finals.