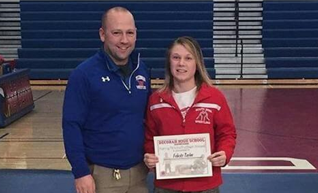 As the wrestling season progresses, we have seen more great competition from our record number of female high school wrestlers. A great accomplishment since our last recap came as Felicity Taylor of the South Winneshiek Warriors was selected as the Natvig/Wicks/Fullhart Outstanding Wrestler at the Decorah Viking Dual Tournament. Taylor went an impressive 5-0 for the day.

Some additional highlights include the following varsity performances from weeks seven and eight:

106:
Tateum Park, a freshman from Davenport North went 2-0 in week seven picking up two forfeits. In week eight, Park won a 6-0 decision and 5-1 decision to go 2-3 for the week. Park’s varsity record improved to 21-10 for the season while her JV stands at 1-0.

Alaina Sunlan, a freshman from Monticello went 1-1 in week seven picking up a first-period pin in 32 seconds. In week eight, Sunlan went 2-5 and notched two additional first period pins (:35 & 1:13). Sunlan’s varsity record stands at 11-17 for the season with a 3-5 JV record.

Ali Gerbracht, a freshman from AGWSR picked up two, first-period pins to go 2-1 in week seven of competition. After two forfeits in week eight, Gerbracht’s record stands at 13-8 for varsity and 2-0 for JV.

Felicity Taylor, a junior from South Winneshiek showed she is a dominant force again this year going 6-1 in both week seven and week eight. Taylor notched four first-period pins, four wins by decision, and four forfeits in her 12-2, two week performance. Taylor’s varsity record sits at 26-7 for the season.

113:
Kim Hendrian, a junior from Roland-Story picked up a forfeit in week seven followed by a nice first-period pin in week eight. Hendrian’s varsity record is 6-15 for the season and her JV record stands at 4-4.

132:
Brittany Shumate, a junior from Woodbine won by pin at 5:31 in week eight of competition. Shumate’s record is 3-21 at varsity for the season and 1-2 for JV.

Believe it or not, there are only a few weeks left to come out and show your support for these wrestlers. We will be here to bring you timely updates as these athletes close out the season.